WATCH: Glenn Maxwell's breathtaking save near the boundary ropes to deny Harshal Patel a certain Six

Glenn Maxwell pulled off a stunning effort at the boundary to deny Harshal Patel a six in the first India vs Australia T20I in Mohali on Tuesday. 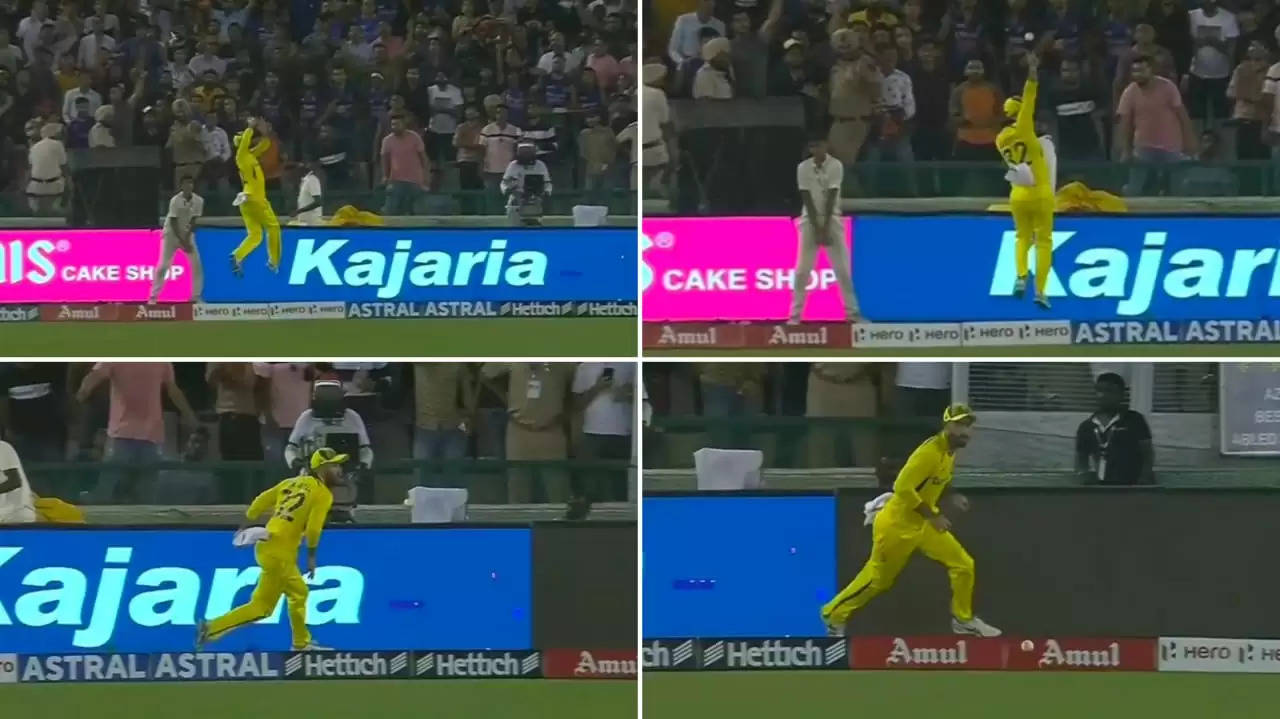 India finished 208/6 after being put in to bat.

Glenn Maxwell produced a stunning piece of athleticism and acrobatics during the first India vs Australia T20I in Mohali on Tuesday. The moment came on the third ball of the penultimate over of the Indian innings bowled by Nathan Ellis. Having trapped Dinesh Karthik on the first ball of the over, Ellis was smashed to the extra-cover boundary by India’s No.8 Harshal Patel off the next ball.

Ellis went slower and full, and Harshal tonked one downtown with fine timing, and the ball seemingly appeared to clear the ropes for a major part of the trajectory. However, Maxwell, stationed at long-on, got to his left, positioned himself and leaped up to pull the ball back in play, saving five runs for his side.

Watch: Glenn Maxwell's breathtaking save near the boundary ropes:

What a stop that from Glenn Maxwell near the ropes! 😍#INDvAUS pic.twitter.com/q3GnIVPUgn

It was Hardik Pandya though, who stole the show with an unbeaten 71 off 30, helping India post 208/6 after being put in to bat. The all-rounder struck seven fours and five sixes, with three maximums coming on the last three balls of the innings.

Earlier, KL Rahul was at his fluent best, taking on spin and pace alike in a stroke-filled 55-run knock. Rahul, who had an underwhelming Asia Cup 2022 with just 132 runs from five innings at a strike-rate of 122.22, showcased intent right at the start, his first boundary being a stunning semi-helicopter hit off Josh Hazlewood, leaving the bowler stunned. He would later scoop Cameron Green for another six over square leg, before unleashing a slog-sweep off Glenn Maxwell not long after.

The right-hander got to his 20th score of fifty or more in T20Is off just 32 balls, and became the third-fastest ever to get to 2000 runs in the format. He was eventually dismissed by Hazlewood for 55 off 35, smashing an attempted pick up straight to Nathan Ellis at square leg. His innings was studded with four fours and three sixes.

Rahul added 68 off 44 for the third wicket with Suryakumar Yadav, after skipper Rohit Sharma and Virat Kohli had been dismissed by the fifth over of the Indian innings after Aaron Finch opted to bowl. Suryakumar was the other major contributor with 46 off 25.