Dinesh Karthik reaches a place of prosperity with his game

The veteran India wicketkeeper stands as the protagonist in one of Indian cricket's heartening comeback tales.
By Kashish Chadha Sat, 18 Jun 2022 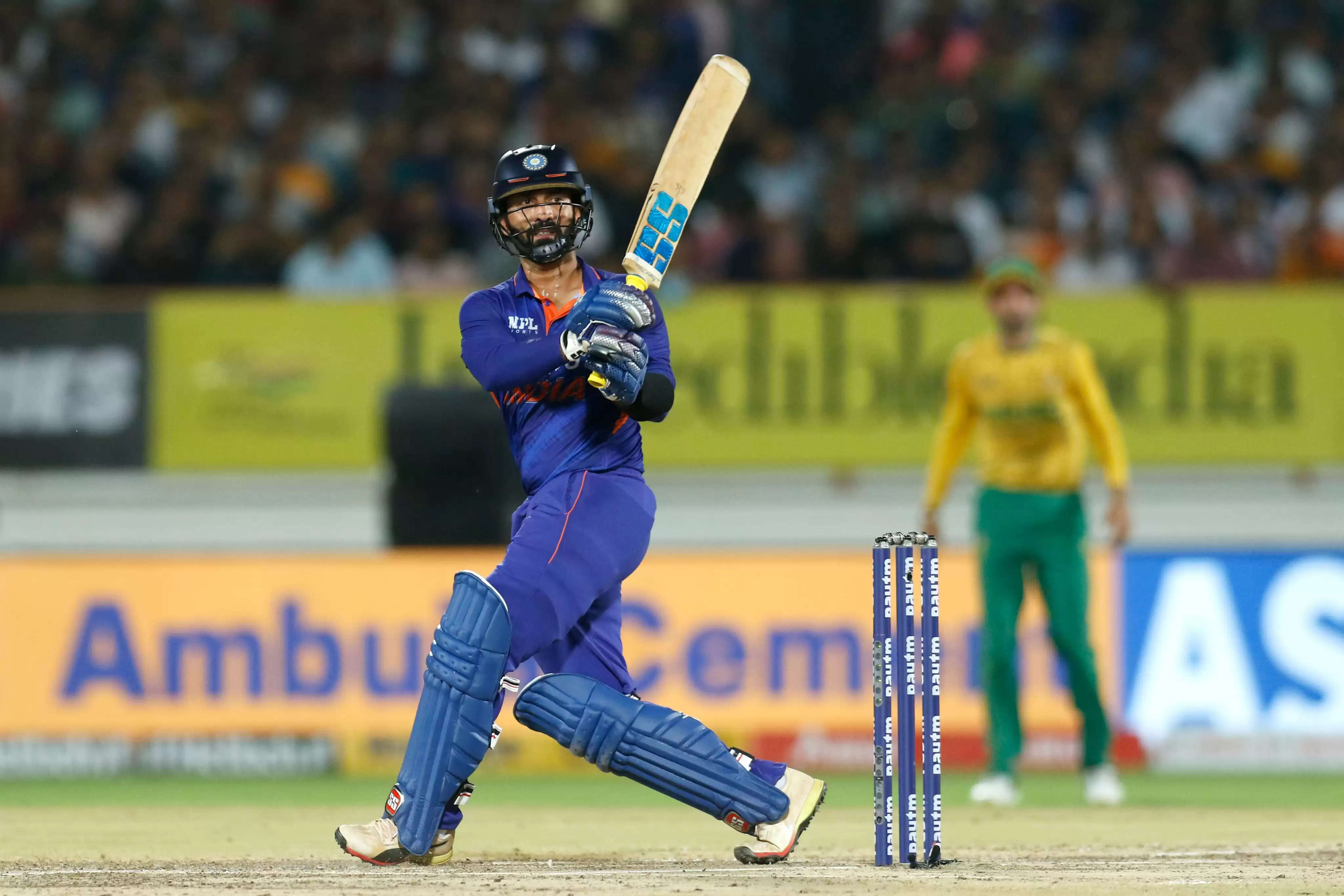 Krishnakumar Kunnath, aka 'KK', was an unrecognised genius. As life rolled on, we met many who never realised it was his face behind their favourite song. KK kept mesmerising people with every tone, every composition and song that connected to their heartbeat without ever getting the fame he deserved.

On that unwavering quest for excellence without chasing recognition, KK somewhere attained the seldom unconquered spot of sanity and just kept singing.

Shauhrat. Fame. It is very difficult to detach yourself from it. It has deserted and drowned many who have desperately lived for it. Barakat. Prosperity. Once achieved, it stays with us for the rest of our lives. KK shined without the spotlight, he prospered to his last day.

An India cricketer oozing this seldom attained prosperity in the past few months is Dinesh Karthik, aka 'DK', who immersed himself in a quest to take his game to the next level and has broken the door reopen aged 37. When they were beginning to sing his retirement eulogies, Karthik declared at the start of the recent IPL he wants to win the T20 World Cup for India.

It was a statement made standing in front of a former India captain, one spoken with no conviction lost. Never bordering on the overconfidence. Just a simple display of emotion in his eyes and words reasserting how much the India cap meant to him.

Having a young family, with enough wealth available and a glittery career awaiting in broadcasting and commentary, Karthik could've settled with life, even if many of us attached the tag of an unfulfilled talent with him. But he chose the grind. This cannot be about fame, for that he had in various forms and means. He was seeking something more meaningful and deeper. He sought prosperity, a much-cherished desire "to do something special".

Cricket being a visual game, it lets people know who is behind the mic. Fame follows prosperity quite instantly here, even if you don't quite seek it. They all love 'DK'. This writer witnessed it live sitting in a far corner of the Feroz Shah Kotla in Delhi when he walked in for his brief two-ball stay in the opening T20I versus the South Africans ten days back.

Among the loudest cheers and standing applause were reserved for Karthik's initial steps onto the cricket field, on his way to face his first ball as an India player after three years. It was unlike any other moment, for that day, the crowd cheered out of respect and not just excitement, seeing a 37-year-old make his comeback. One could feel it.

The IPL helps, of course. It cultivates attachment with players without them needing to wear the India jersey. The IPL is where this turnaround began. In a 16-match campaign, six players made over 200 runs for RCB. No one struck at a better rate than Karthik's 183.33 and only one averaged higher than his 55. His 330 runs encompassed multiple knocks of great influence and impact on the proceedings. The RCB think-tank offered DK the role clarity and assurance; he paid them back with affluent and beaming performances. Win-win deal.

In many ways, RCB learnt from a mistake made by Karthik's previous IPL franchise the Kolkata Knight Riders (KKR), who kept fluctuating with his entry points and never really enabled a sense of rhythm and clarity to his batting. Karthik, a moving, anxious sort of personality at times, has always needed that level of clarity to bring the best out of him. If he needs to smash 30 off 15, Karthik would do it 9 out of 10 days. It's when he has to process and deliberate for too long is when has tended to get a little lost. This trait held him back in Tests and ODIs. But works and suits the demands of T20.

It's why Rohit Sharma kept him in the shed till it became a necessity during that Nidahas Trophy final. While sending Vijay Shankar ahead was a tactical mistake, it inadvertently brought the best out of DK and propelled him to an innings that remains etched in memories. That knock should've also infused a breath of fresh life into Karthik's India career, especially as he went on to enjoy a fruitful phase with the bat.

From his return to T20Is at the start of 2018 till mid-2019, Karthik's 15 innings had him striking at 155.10 while averaging 45.60. It was a phase where he was prospering as a T20I player and relishing clarity. Then in a shocker, India decided to hand him an ODI comeback, too, which hurt the side when he, asked to fly in at short notice, looked completely out of sorts in the World Cup semifinal. In an unforgivable mixing up of formats, the player not only found himself out of the ODI side but was also dropped from T20Is.

The realities of life can be hard-hitting. They often kill the believer inside you. But that is the phase when Karthik would've needed faith in himself the most, as he swam over multiple rejections, comments on age, KKR's tactical mishandling of his spot, and a broadcasting gig with Sky Sports that attracted praise but also retirement suggestions. The world works in the present. DK was looking like a distant past.

That changed with an unwavering quest for prosperity. DK didn't go about telling people how good he still is. He proved it on the field, with a singleminded focus on attaining excellence and sanity that comes with it. It's amazing how elements combine for you when you really want something and have worked hard enough to achieve it.

For DK, those elements came together at RCB when it offered him all the support and clarity. And now, in the Indian set-up led by the ever verse and empathetic Rahul Dravid, who would have all the respect in the world for his ex-India teammate, seeing him come out of the jaws of oblivion and stand triumphant. Dravid had been vocal regarding the need for every IPL star to be flexible and prepared to a different role when they walk into an Indian team. For Karthik, he recognised the need for him to stay put in the end-overs duties and keep the trust going.

"I am very secure in this set-up," he said after his match-winning 55 off 27 in Rajkot on Friday (June 17). "In the last game, things did not go well but I felt safe going back to the dressing room. Dravid has not just focused on the results. The dressing room is secure, which is good. That clarity and environment have helped."

There is an elder brotherly feeling and vindication about Karthik's success, it's a win for his spirit, his dedication and a triumph of the prosperity brimming inside him.