From Yuvraj Singh to Ryan Burl: List of players who scored Most runs in an over in T20Is

In a game between Zimbabwe and Bangladesh, Ryan Burl hit 34 runs in an over to become joint second most runs scorer in an over in T20Is.
By Prachi Mahamia Tue, 2 Aug 2022 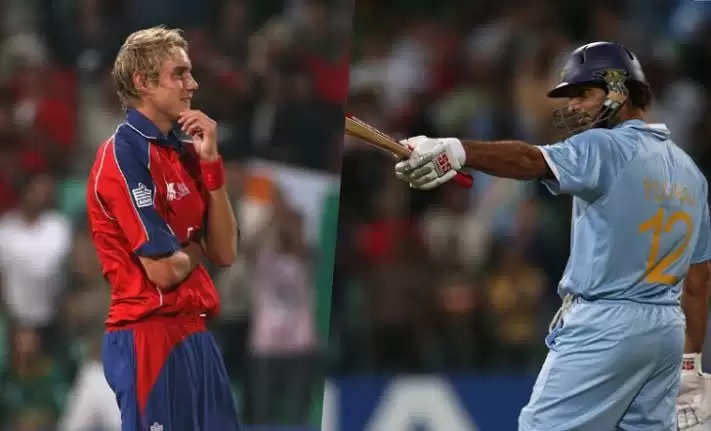 The shortest format of the game, T20s is highly batsmen oriented. Time and again we've seen batsmen dominating the best of the bowlers in the world. The widespread use of drop-in pitches and smaller boundaries makes it easier to score quick runs and how! Even though batters and spectators enjoy seeing high-scoring matches, bowlers find it to be a nightmare. Here are 4 instances of most runs in an over in a T20I game.

The first is always remembered well and for a long, long time. However, this is something Stuart Broad would want to forget. The ICC T20 World Cup match between India and England in 2007 marked the first time something like this had ever been done. Yuvraj smashed six sixes off Stuart Broad's final over, which was also the penultimate over of the innings. Yuvraj accumulated 36 runs in that over but was eventually caught out for 58 in the final over after reaching his fifty with the last six of the over in just 12 balls. India finished with a score of 218/4. After his final over, Broad had dismal figures of 0/60 to his name.

History repeats itself. This time it was West Indian striker Kieron Pollard who hit 36 runs in an over. In a game between West Indies and Sri Lanka, Pollard hammered six sixes off Akila Dananjaya. They chased down the target of 132 in just 13.1 overs and with four wickets in hand. The game's tone was established by Pollard, who exploded in the sixth over and tamed Dananjaya, who had amassed an incredible 3/17 in the previous two overs, along with a hat-trick. The Sri Lankan bowler ended his spell with figures of 3/62.

Bowling records are great, especially in a T20 game but not all the records are pleasing. One such record belongs to India's Shivam Dube. In February 2020, at Mount Maunganui, the New Zealand duo of Tim Seifert and Ross Taylor hit Dube for 34 runs in an over. This set an unfavourable record for the most runs conceded by an Indian bowler in an over. Seifert faced the first four balls of Dube's over and scored 6641. Taylor took charge thereafter and scored 5nb66. Nonetheless, the damage wasn't bad enough and team India won the game by 7 runs.

Zimbabwe's Ryan Burl equalled the tally of second most runs hit in an over. In the third Twenty20 International between Zimbabwe and Bangladesh in Harare, he struck Nasum Ahmed for 34 runs in an over. Burl scored 34 runs in the 15th over of the innings, after hitting four consecutive sixes, a four, and another six. His 54 runs of 28 balls, helped his team reach a total of 156/8. While doing so, he broke his record of hitting 30 runs in an over, that too was against Bangladesh in 2019.