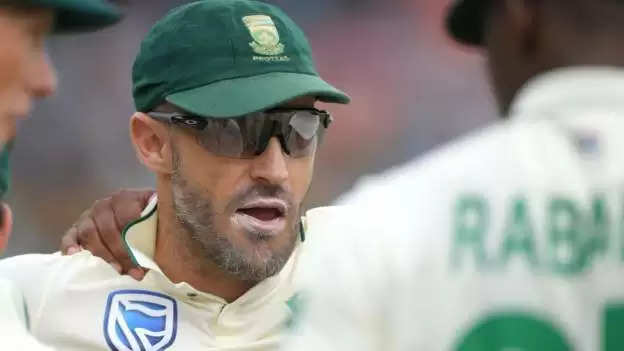 Faf du Plessis termed David Warner a "bully" of an opposition player. In his book 'Faf: Through Fire', the former South African skipper talked about the experienced Australian opener's intimidating nature and his fighting character with an example cited from the controversy-marred 2018 Test series in the rainbow nation.

Du Plessis recalled in his autobiography the tunnel incident where Warner and Proteas wicketkeeper-batter Quinton de Kock nearly beat each other up following a verbal confrontation between the two cricketers.

The incident is from Durban, the venue for the first of the four Test matches held in the yet infamous series that did feature some outstanding cricket but also heaps of controversies, including the Cape Town ball-tampering chaos that rocked Australian cricket to its core.

A clip of the De Kock-Warner fiery exchange had gone viral at the time, with teammates required to pull the two players back or else they could easily have crossed the line during a tea break and punched each other on the faces.

In his own book, Aussie keeper Tim Paine said Warner had been instigated into the fight by comments from De Kock against his wife. In Du Plessis' narrative, however, Warner and Australia wanted to bully the home side.

"Australia wanted to bully us. We had to stand up for ourselves. They abused us that whole game but the way we fought back turned the series around," wrote the then skipper, who was cooling off in the shower and was in towel when he entered the clip and tried to relax the atmosphere somewhat.

In a critical comment on Warner specifically, Du Plessis wrote in the book: "He was a bully. I don’t have time for bullies."

Du Plessis is now in charge of Royal Challengers Bangalore (RCB) in the IPL, a franchise whose association with his ex South Africa teammate AB de Villiers has reached legendary proportion even after him calling quits.

Writing on De Villiers in the book, his childhood friend and then fellow middle-order bat for South Africa, Du Plessis admitted to feeling "jealous" of the man, who is inarguably one of the finest ever players to have held a bat.

But the player also stressed that over time he became more comfortable in his journey at the top-level game without feeling overawed by De Villiers' presence.

"I’m not perfect. I’ve never claimed to be. I’ve never been the most talented player," wrote Du Plessis, whose relationship with De Villiers has had its fair share of ups and downs, mainly cricketing, including the time when as skipper of South Africa he rejected De Villiers' request to return to the side in time for the 2019 World Cup after taking a shock retirement a year before.