'We can't pinpoint anyone' - Hardik Pandya on India's death-overs woes

Hardik Pandya came out in defence of the underfiring Harshal Patel and Bhuvneshwar Kumar after India's painstaking loss in Mohali.
By Kashish Chadha Wed, 21 Sep 2022 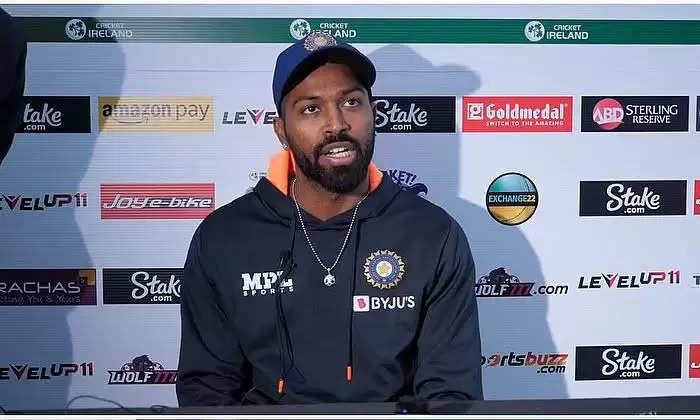 India gave away 55 runs off the last 4 overs to conceded a loss in a high-scoring opening T20I versus Australia.

Hardik Pandya addressed question marks hovering over India's death-bowling issues heading into the T20 World Cup after the team's disappointing loss in a high-scoring opening T20I versus Australia in Mohali.

India faced a four-wicket loss despite posting a massive 208/6 on the board, thanks to Pandya's exhilarating knock of 71 not out from just 30 balls. While the premier Indian allrounder provided his bowling unit enough cover for the dew, he was left in dismay by the home team's seamers, with the hosts conceding 55 runs off the last 3.2 overs in the chase.

Harshal Patel and Bhuvneshwar Kumar, India's designated death-overs seamers, were hammered to all parts by Australian middle-order duo of Tim David and Matthew Wade. Bhuvneshwar gave away 15 and 16 runs in his two overs at the end, with Patel going for 22 in the 18th over which effectively ended the contest.

Hardik Pandya, though, refrained from focusing on the names, saying such outings and losses are part of the learnings for the side heading into the T20 World Cup. The lessons maybe harsh, but Pandya said, "we can't pinpoint anyone" and backed their tried and tested men to do the job for the side.

"See we can't pinpoint anyone. It's a game. They have also conceded 24-25 run overs and it didn't matter. It's a bilateral series, we will get two more games and we will try to get batter," Hardik Pandya told the press in Mohali after India's loss.

"As a team, we want to get better. Losing teaches you a lot and where we can get better. We are a process driven team and by the time the World Cup comes, we will make sure and get our processes better and see where we can improve. I am very confident about the guys. Few games here and there don't change much," he added.

An expensive set of overs at the death was common similarity to India's losses in Dubai at the Asia Cup 2022 recently. India conceded irrevocable Super 4s defeats to Pakistan and Sri Lanka despite posting above-par scores, owing purely to poor showings at the death.

Another similarity in the three defeats has been the absence of Jasprit Bumrah, who skipped the Asia Cup due to an injury and was given more time to regain full match fitness in Mohali.

"We all know exactly what Jasprit Bumrah brings to the side and how important he is for us. There will be concerns here and there (but) we have got to trust our boys," Hardik said.

"These are the best fifteen people who are there in the country, that's why they are there in the squad. Jasprit being there makes a big difference, obviously, but... he is coming back after an injury so it's important to get enough time to come back and not put a lot of pressure on himself," he added.