The Indigo pilot sent a handwritten note to a passenger who had sought an update from him to the T20 World Cup 2022 game.
By Kashish Chadha Tue, 1 Nov 2022 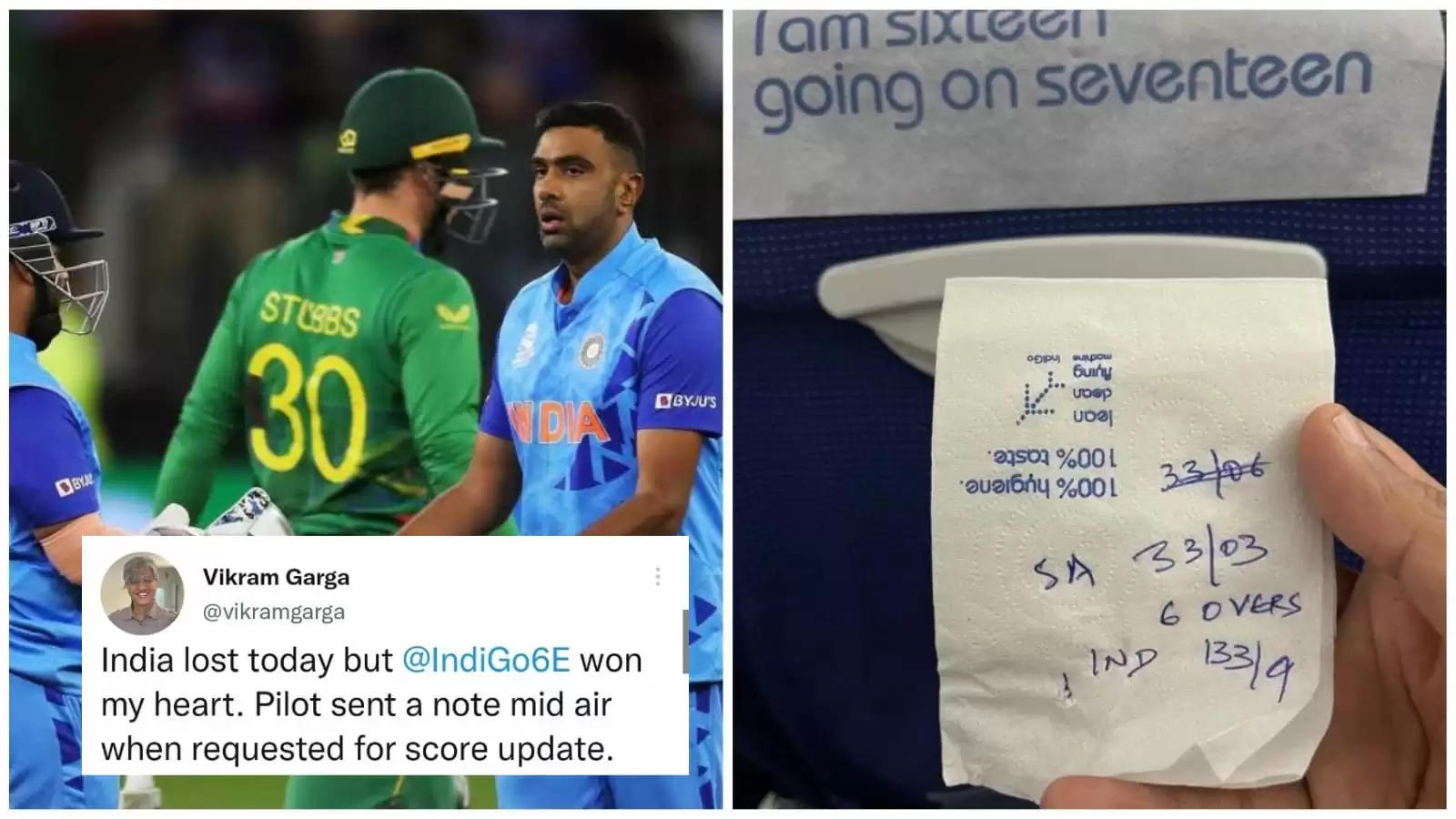 Pilot of an Indigo-based jet won hearts over social media for sharing a handwritten note with a passenger who had sought updates to the India versus South Africa game of the T20 World Cup 2022 on Sunday (October 30).

Travelling mid-air, the passenger named 'Vikram Garga' shared a handwritten note over Twitter after seeking updates to the score from the pilot, who then showcased his love for the sport by providing him the same.

In a Twitter post that is doing the rounds, Garga revealed the pilot sharing an update at the close of the powerplay during the South African run-chase. The Proteas were 33 for 3 at the time, chasing India's 133/9 on Perth's fast and bouncy track that troubled all batters.

The tweet from Garga went viral on Twitter from the moment it was posted by the passenger travelling from the Indigo jet. It received amazing traction, with 112 retweets and 956 likes on it already.

Later on, Indigo made it a point to interact with the passenger as well, expressing delight that he enjoyed his experience on the flight.

Hi, we're glad to see this. We wish to see you on board soon again.~Vaishali 💙

The tweet saw fans applaud Indigo pilot for his terrific gesture, praising their gesture and asking it to be replicated by by other air-travel companies to their passenger if they are unable to tune into the fixture on the flight.

The incident made Garga's day as he said even though India lost, Indigo won his heart via their pilot's noble gesture. The pilot was seemingly a huge cricket fan himself, providing a match update to the passenger mid-air when he could've easily ignored the request focusing on his travel duties.

The passenger and pilot, of course, would've been a touch disappointed to see India lose the crucial Super 12s fixture in Perth, where the Indian batting unit failed to give a proper account of itself bar the exceptional Suryakumar Yadav, who made a terrific half-century on the same pitch.

The loss at the Optus Stadium has now left India needing to win over Bangladesh and Zimbabwe to be safe in the race to bag the semifinal spot from Group 2. They play Bangladesh in Adelaide on Wednesday (November 2) and take on Zimbabwe in Melbourne on Sunday (November 6).