Watch: Mayanti Langer throws a 'not everyone is Jadeja' remark at a shocked Sanjay Manjrekar

Sanjay Manjrekar was given an unexpected reminder of his spat with Ravindra Jadeja by the Star Sports anchor.
By Kashish Chadha Wed, 31 Aug 2022 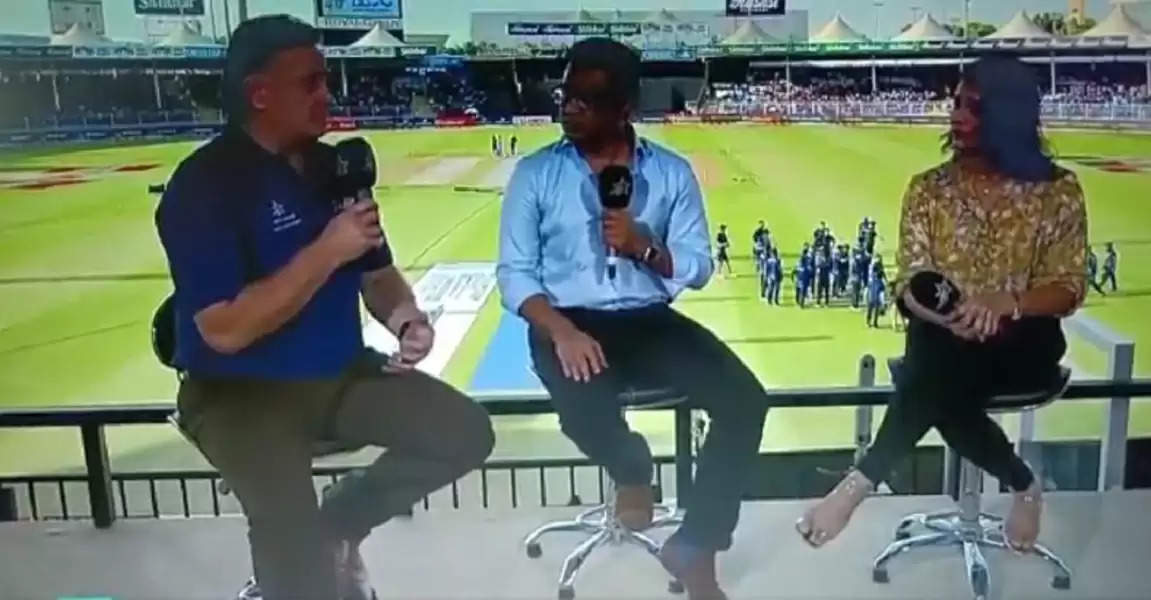 Sanjay Manjrekar was given an unexpected reminder of the Ravindra Jadeja spat from the 2019 World Cup.

Star Sports leading anchor Mayanti Langer pulled the leg of former India Test player Sanjay Manjrekar by reminding the renowned commentator of an infamous episode he was part of alongside allrounder Ravindra Jadeja.

Langer left Manjrekar shocked by throwing in a remark on Jadeja against him at the sidelines of an Asia Cup 2022 game on Tuesday (August 30) night in Sharjah.

As Afghanistan hammered Bangladesh to become the first team to enter the Super 4 stage from Group B, Manjrekar get down to discussing the excellent over-rate seen from both sides alongside his co-commentator Scott Styris, with Langer playing host to the pre-match show.

The two former cricketers found a complete contrast to the match between arch-rivals India and Pakistan on Sunday (August 28) in Dubai, where both teams were made to pay in-match penalties.

While India bowled two of their overs with an extra fielder inside the circle, Pakistan delivered the final three overs of their quota with the same field restriction after both teams failed to kickstart the 20th over of their innings on time.

As per the ICC regulation that came into effect for all T20Is at the start of the year, bowling sides must begin the final over of their innings by the 85th minute from the point of beginning of the innings. The timings are revised at the standing official's discretion if there is any time lost due to injuries, DRS interventions and other unforeseen events.

Since both Pakistan and India failed to complete their quota in the stipulated time, they had to pay for it by one boundary rider less, making it easier for the batting side to execute their big shots on a large outfield in Dubai.

Tearing into both the sides for it, Styris said on the Star Sports show: “We have seen that a lot of spinners don't like to bowl in the death it seems. Even the great Rashid Khan isn't a big fan of it. Now if you have one less fielder to protect you have to change your entire strategy on the lines he has to bowl in particular."

"Teams would then have to protect one side of the boundary rather than have fielders on both sides. So those are the adjustments that have to be made and hence they have get their spinners done a little earlier now," he added.

In an immediate response, Manjrekar mentioned: "One very quick suggestion and a very simple tactic. Just bowl your overs quicker."

This is when Langer unveiled the funny side of her and left Manjrekar absolutely stunned by her wit.

"Sanjay, not everyone is Ravindra Jadeja. I had to it. See I just got a ‘gone one’ from Sanjay," she said, throwing an unexpected reminder of the controversial Manjrekar-Jadeja feud.

In an infamous incident during the 2019 World Cup, Manjrekar referred to Jadeja as a "bits and pieces cricketer", to which the Indian cricketer took offence and accused the commentator of spitting "verbal diarrhoea" against him.

The spat got uglier, with fans taking sides, when Jadeja then smashed New Zealand in the tournament semifinal, playing the lone warrior with the bat in India's painstaking defeat in Manchester.