Steve Smith unveiled yet another of his unique gem with bat in hand during the second ODI against Zimbabwe in Townsville.
By Kashish Chadha Wed, 31 Aug 2022 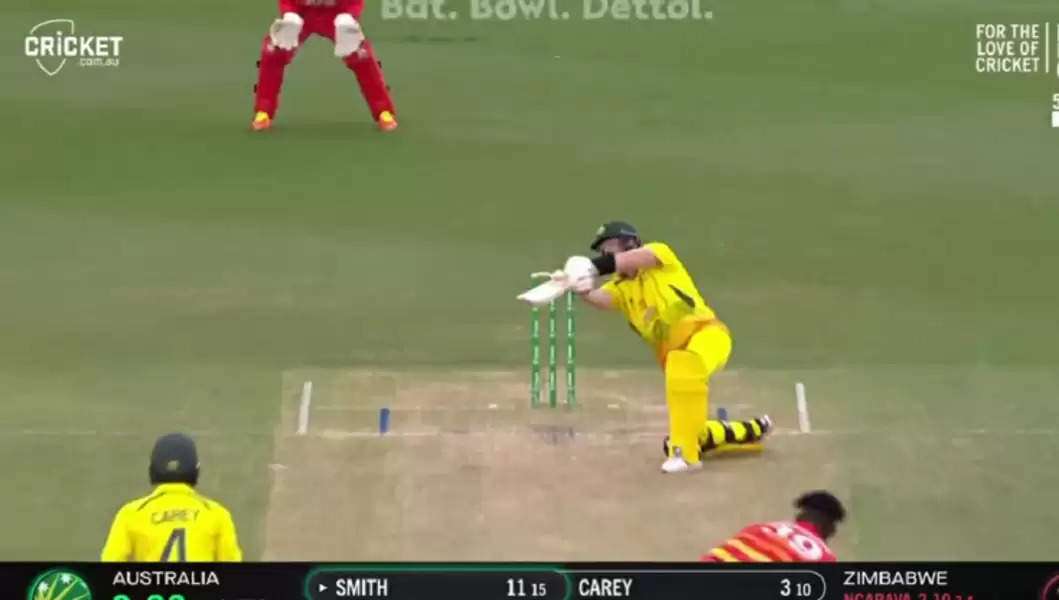 The Australian giant played a remarkable shot for six over point in the second ODI versus Zimbabwe.

Given his unorthodox technique with the bat, Steve Smith is always a prime candidate to produce some extraordinary strokes on the field. On Wednesday (August 31), the modern-day legend added to this unique list of shots by playing an eye-catching lofted drive for a six against Zimbabwe.

Facing left-arm seamer Richard Ngarava, Smith made room for himself, collapsed while going through with his stroke and yet managed to find optimum connection for a six in an often uncharted territory.

Seeing the Aussie batter dance down the ground, Ngarava smartly tried to keep the ball as far away from him as possible. But he was upto the task and found the sweet spot on his willow for a maximum over point boundary.

Seldom have we seen batters collapse on the turf and still find another meat behind their stroke for a maximum behind square on the off-side. Steve Smith did that and did it in his inimitable style to fetch another six runs for Australia.

The six was witnessed near the close of the seventh over in the Australian run-chase. Facing Ngarava from the over-the-wicket angle across the right-hander, Steve Smith tried to take on the left-arm quick by dancing down the track.

To his surprise, Ngarava adjusted his line wide outside the off-stump to try and make it more difficult for the batter to go through with his shot.

The player, though, was up to the task and while he lost his balance going ahead with the stroke, the batter managed to find enough connection behind it to secure a maximum under his kitty.

Steve Smith believes he will have a more active role to play in Australia's defence of the T20 World Cup title in home conditions this year after an indifferent campaign in UAE last winter.

Known for his spin-handling abilities, Smith, however, could muster only 69 runs from his four innings at a woeful strike-rate of 97.18 in the Middle East. He was overshadowed completely by Australia's new No.3 Mitchell Marsh, who played an instrumental role in his team's maiden title victory.

With Marsh scoring his 185 runs at 61.66 per innings while striking at 146.82 at No.3, including a match-winning 77* in the final, and other young powerhitters emerging in the set-up, Steve Smith has been under scrutiny over his T20I spot, especially as he holds modest record in the format.

The right-hander has a career average of 26.51 with a strike-rate of 125.74 from 57 matches for Australia. Given the global shift in the run rates, Smith's presence at the crease at his rate of scoring has been a costly one for the Aussies.

The 33-year-old, however, is not perturbed by the talk outside and is taking heart from a fruitful trip to Sri Lanka in June. Smith played a measured knock of 37* off 27 to help Australia secure a T20I series win on the Lankan shores earlier in the year.

Backing his case, the player said he is a much more capable player than someone used to mend collapses only.

"I feel like when I'm playing good T20 cricket, I'm in that team for sure," he told the reporters on Tuesday (August 30). “I think the role that I've been given in the last couple of years is the Mr. Fix-it sort of role, and that tag's been taken away from me now (since) the Sri Lanka tour."

Smith said he is capable of reinforcing his presence amidst superstar hitters Mitchell Marsh, Glenn Maxwell, and Marcus Stoinis, who tend to hog most of the limelight.

"I felt like I could go out and just play with a lot more freedom naturally (in Sri Lanka) and not have any kind of hesitation in the back of my mind, like I need to be a bit more reserved or anything."

“I can just take the game on and if I want to smack someone for six first ball, then I'm able to do that freely. When I'm playing my best, I play freely. I watch the ball and hit the gaps and just look to use the middle of my bat as much as possible," he added.