We witnessed an interesting battle between Phil Salt and Michael Pepper during the T20 Blast match between Lancashire and Middlesex.
By Cricxtasy Media Mon, 11 Jul 2022 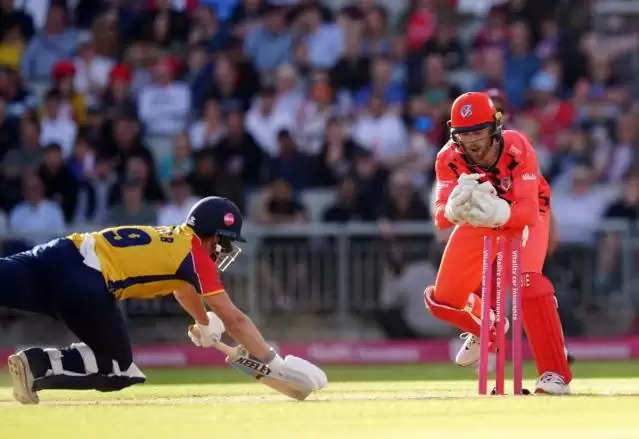 Somerset grabbed the weekends cricket headlines when seeing off Derbyshire in record-breaking style in their T20 Blast Quarter-Final.
Meanwhile at Old Trafford, Lancashire Lightning were going about their business in solid - if not
quite so spectacular fashion - when running down the Essex Eagles with 4.2 overs to spare. With only
four sides remaining ahead of Finals Day on 16 th July, check out NBO to find the best current offers for those
looking to take an interest in the action.

A keenly fought contest, the result genuinely looked to be in the balance during the early stages of
Lancashire’s Innings. And further spice was added to proceedings courtesy of a clash between two of
the world’s most popular condiments - as Michael Pepper of Essex and Lancashire’s Phil Salt did their
best to ruin the other’s day.

It was Salt who struck first. With Essex in to bat, Michael Pepper was ticking along nicely on 36, only
for a moment of misjudgement to cost him dearly. Taking the aggressive approach when facing a
delivery from Tom Hartley, Pepper caught himself in a jam when befuddled by the spin to find
himself stranded in no-mans land outside the crease. No way back from there, with wicketkeeper
Salt gleefully removing the bails.

If Pepper was the master of his own undoing at the crease, he went some way to atoning for that
error with a sublime piece of fielding to assist with the dismissal of his nemesis. England batsman
Salt looked to have made pretty good contact with a booming drive towards the fence, and even
when Pepper got to it, he still had plenty of work to do. Looking destined to step over the boundary
having made the catch, Pepper improvised magnificently to hurl the ball to team-mate Ben Allison
for the out. Salt 1 – 1 Pepper.

That moment of brilliance at the boundary failed to inspire the Eagles. A tally of 161 had looked in
jeopardy given the conditions of the day and it soon appeared only a matter of time before
Lancashire reached their target. The Eagles attack made a decent fist at keeping the run rate down,
but a failure to do any real damage kept the pressure off the hosts. Excellent knocks from Steven

Croft and Dane Vilas ultimately seeing Lancashire in cruise control by the time the winning blow was
struck with over four overs to spare.

A disappointing end to the tournament for Essex, although with two trophies still to play for, the
Eagles have little time to lick their wounds. Up next for Lancashire comes what looks to be one of the
most mouth-watering clashes of the season to date. Whilst Somerset and Hampshire do battle in the
first Semi-Final, Phil Salt and his teammates have been paired with perennial rivals Yorkshire Vikings
in a classic “War of the Roses Encounter”. Finals Day is not to be missed.