The Pakistan speedster was seen handing over his international jersey to a special Sri Lankan supporter prior to the Asia Cup final.
By Kashish Chadha Sun, 11 Sep 2022 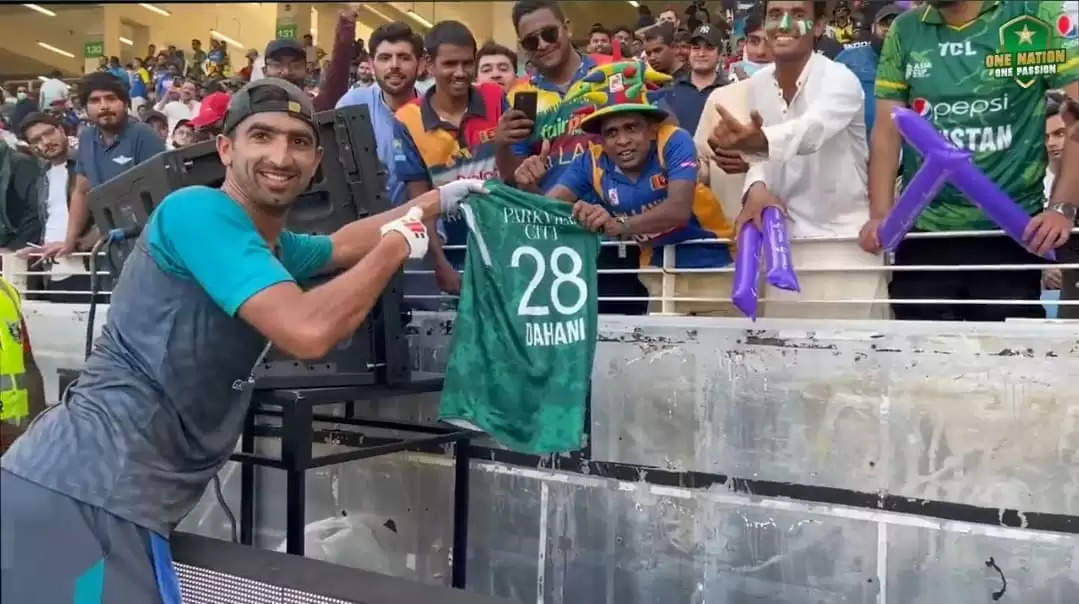 Pakistan seamer Shahnawaz Dahani shared a heartening moment with a group of Sri Lankan fans ahead of the Asia Cup 2022 final in Dubai on Sunday (September 11).

Dahani was seen interacting with the Sri Lankans, besides sharing his Pakistan jersey with one of them prior to the marquee clash between the two countries in the Middle East.

The pacer identified a hardcore Sri Lankan fan among the group of fans from the Island nation that travels around the world with the Lankan Lions and supports them all year.

Shahnawaz Dahani then handed him over his Pakistan jersey as a mark of appreciation on his part for being a wonderful cricket supporter.

The great incident was captured in a video by the Pakistan Cricket Board (PCB) and shared via a small clip over Twitter from their official handle before the Sri Lanka-Pakistan Asia Cup 2022 final.

Shahnawaz Dahani may not be part of the much-anticipated clash, but he made sure he left his imprint on the game in some form or shape by sharing a few heartening moments with a passionate Sri Lankan fan.

This fan became a lucky recipient of Dahani's Pakistan jersey and had his day made even before he could cheer for his favourite Sri Lankan stars in the tournament finale.

A wonderful moment before the match ✨@ShahnawazDahani gives his jersey to a 🇱🇰 fan 👏#AsiaCup2022 | #SLvPAK pic.twitter.com/4RlIflx8OM

Dahani identified this special fan among the bunch of Sri Lankan spectators that made the Dubai International Stadium for the keenly followed fixture.

He directly pointed at this fan to come near the wall that enclosed the stand in which he was sitting and asked him to collect the jersey he had for him on offer.

It isn't known what got Shahnawaz Dahani to hand over his Pakistan jersey to the fan, but the moment certainly brought smile on his face and also the cricketer grinning about it.

They then shared a high-five as well, with the Sri Lankan fan saying "all the best!!" to the Pakistan speedster and wishing his team well for a tough fight in the contest.