The former India batter has been given the honour as a mark of respect for services to the game of cricket.
By Kashish Chadha Fri, 5 Aug 2022 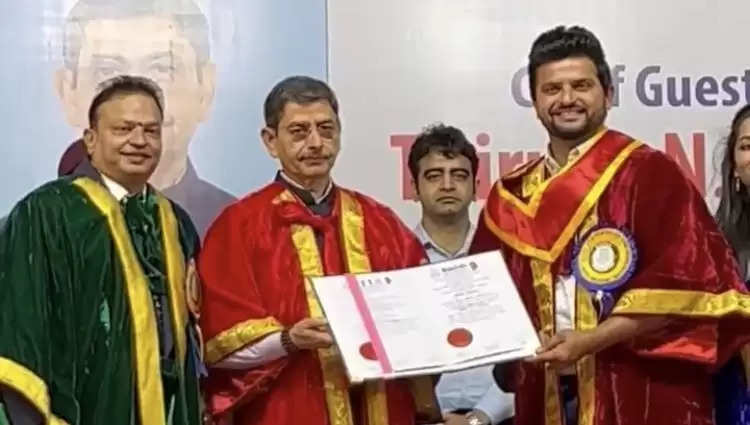 Suresh Raina is now Dr Suresh Raina, having been bestowed with the honour of a doctorate degree from Vels University in Tamil Nadu.

The former India and Chennai Super Kings (CSK) has received the honour as a mark of respect for his services to the sport of cricket and society.

Based in Pallavaram down south of India, the Vels University acknowledged the cricket for his on and off-field contributions on Wednesday (August 3).

"We are delighted to invite Mr. Suresh Raina, a talented and humble human being, to receive the Honoris Causa from our esteemed Vels Institute of Science, Technology, and Advanced Studies," the University said in a statement, applauding Raina for his contribution as a sportsperson and also a responsible citizen of the society.

Under his wings, Raina has been involved in a number of charity foundations and their work, led by the Gracia Raina Foundation, which is a women empowerment organisation named after his daughter 'Gracia', working extensively to help women in different walks of life.

In 2017, the Uttar Pradesh cricketer was named the brand ambassador of the Ghaziabad Municipal Corporation (GMC).

During the pandemic, Raina also showcased his writing skills to the fans by authoring and releasing his autobiography, "Believe—What Life and Cricket taught me." The book brought Raina's passionate followers up and close with his struggle and journey from being a small-town boy in UP to wearing the Indian jersey.

Raina, however, is remembered more fondly for his excellence in the field, being a livewire in the deep and a fantastic catching option inside the 30-yard circle. He took close to 170 catches for India, with another 108 grabs coming in the IPL where he is known as 'Mr IPL' for being one of the most prolific scorers.

The 35-year-old collected 5,528 runs in his IPL career at an average of 32.51 and strike-rate of 136.56 for CSK, with whom she shared a wonderful association and helped the side claim the coveted IPL trophy four times.