Watch: Mohammad Hafeez says Shahid Afridi is the reason why R Ashwin is not playing in Asia Cup anymore

Mohammad Hafeez talks about why R Ashwin is not a part of Indian limited over squad lately
By Prachi Mahamia Tue, 6 Sep 2022 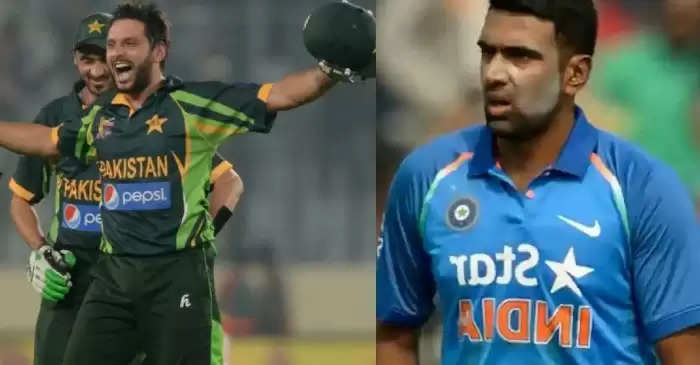 Former Pakistani player Mohammad Hafeez has been in the news lately for his comments and opinions about the Asia Cup. Recently in one such talk show discussion with a Pakistani news channel, the player shared his opinion on what could be the reason behind not including Indian spinner R Ashwin. Ashwin is team India's go-to spin bowler in Tests, especially when it comes to sub-continental conditions. However, when it comes to limited overs, precisely in T20Is the management was sceptical about going ahead with him. His T20I numbers are below average as compared to his performance in the rest of the formats. Having played 54 T20I he has only picked up 64 wickets.

Speaking about the same, Hafeez said, "I thank Shahid Afridi. Thanks a lot Shahid bhai. That is the effect of the two sixes you finished the match in the Asia Cup in 2014." He was referring to an incident that took place in 2014. In the Asia Cup 2014, India vs Pakistan clash, Pakistan won the match with 2 balls to go. Team India needed to defend 10 runs, R Ashwin was the man at work. The dramatic last over saw the bowler picking up the wicket of Saeed Ajmal putting Pakistan under pressure with one wicket left. Shahid Afridi was batting with the last man Junaid Khan. Unfortunately, Ashwin couldn't defend the runs as Afridi finished the game hitting back-to-back sixes.

Watch: Mohammad Hafeez explains why R Ashwin is not a first choice for limited overs

Why Ashwin not playing regularly in recent past #PAKvIND matches. Credit to @SAfridiOfficial Boom Boom master strokes in #AsiaCup2014 pic.twitter.com/0MjjUFJ4ia

Ravichandran Ashwin, who received a surprise call-up prior to the T20 World Cup last year, is once again in the running to be in the squad for the forthcoming tournament in Australia. Ravindra Jadeja is likely to not participate in the tournament after he injured himself during Asia Cup. Yuzvendra Chahal, the team's primary spinner is going through a rough patch lately whereas Ravi Bishnoi as well as Axar Patel are also looking forward to securing a place in the world cup squad. There is no official word on when the team will be announced but the men in blue will be playing with their full-strength squad in the upcoming Australia and South Africa series.