Watch: Shakib vs journo! Hilarious sequence of questions and answers after loss to India in press conference

Shakib Al Hasan was presented with a rather funny set of questions at the post-match presser following Bangladesh’s five-run defeat (DLS) to India in a T20 World Cup 2022 Super 12s clash on Wednesday.
By CX Staff Writer Wed, 2 Nov 2022 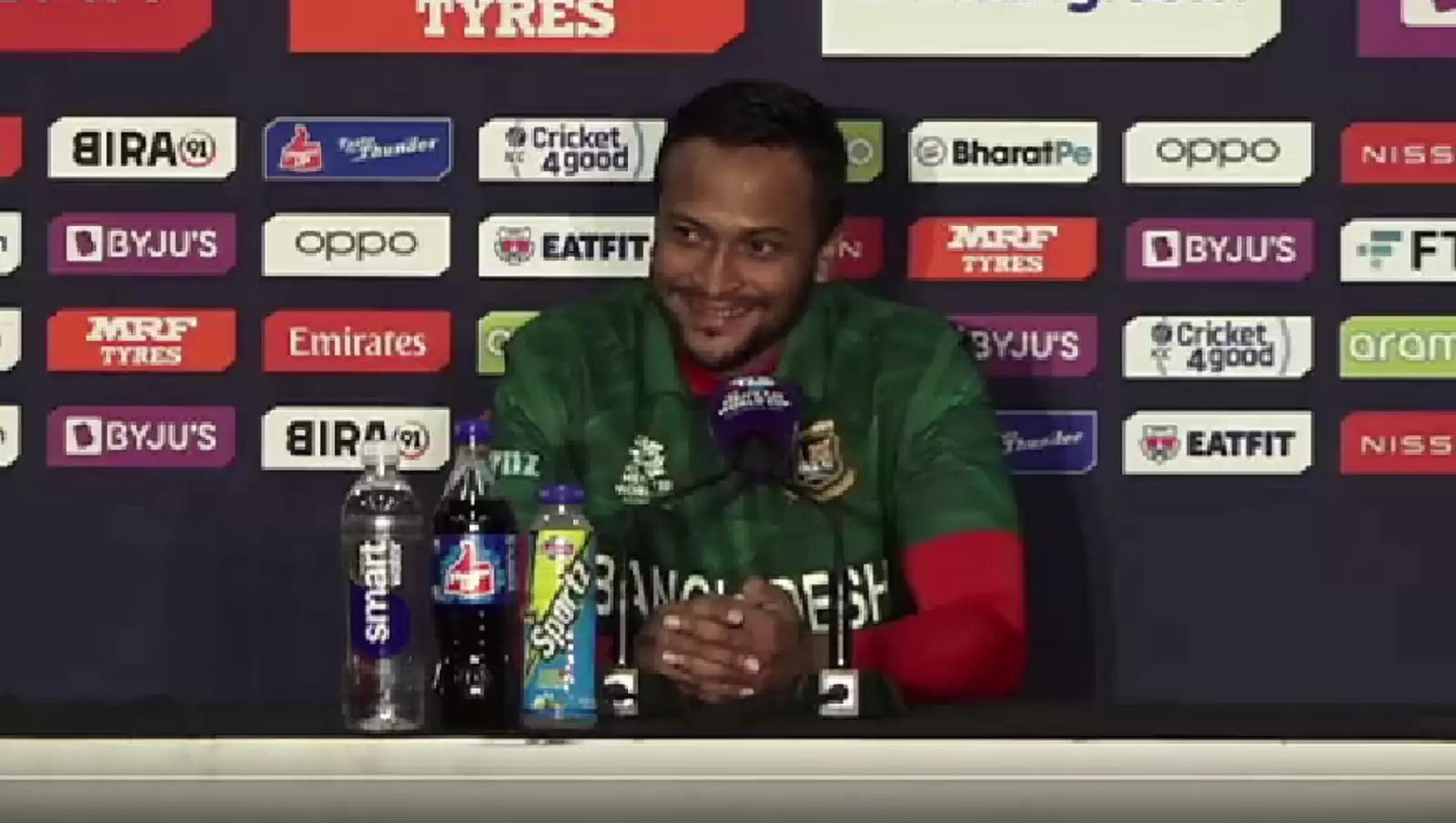 “You were discussing the rivers of Bangladesh?”

Bangladesh skipper was put forward with a rather uncharacteristic and hilarious set of questions at the press-conference following his side’s five-run defeat to India (DLS method) in a crucial Super 12s clash of the ongoing T20 World Cup 2022 at the Adelaide Oval on Wednesday, November 2.

Bangladesh were well on course in their chase of 185, thanks to a blistering 60 off 27 from Liton Das. Das and fellow opener Nazmul Shanto combined for a 66-run start from seven overs, before a 40-minutes delay due to rain followed. Bangladesh were ahead by 17 runs on DLS at that point, and were somewhat reluctant to resume with the outfield not fully dried up, with them being set a revised target of 151 in 16 overs.

Das was runout on the second ball post resumption, and Bangladesh lost their way thereafter, managing 14 runs off the last over bowled by Arshdeep Singh, who was tasked to defend 19 after having bagged two wickets earlier in the innings.

Unsurprisingly, the post-match presser started with questions pertaining to the rain break, but followed a funny sequence.

Here’s how the conversation between a journalist and the star all-rounder unfolded:

Journalist: “Did you really try not to play after the rain?”

Shakib: “Do we have any option?”

Journalist: “No, that’s the reason. Did you try to convince them?”

Shakib: “Do I have ability to convince the umpire?”

Journalist: “Accha. Then you were discussing the rivers of Bangladesh?”

Journalist: “Did you discuss something about the rivers in Bangladesh or something? What were you talking!?? Can you kindly explain?”

Shakib: “OK now you are asking the right question. Umpire called both the captains and told us the targets, how many overs remaining, playing rules...”

Journalist: “That’s all, and you all accepted it?”

This is how the Shakib al Hasan press conference started. 😅https://t.co/miENEmDalY pic.twitter.com/sFOkYpFyJE

Watch: Shakib vs journo! Hilarious sequence of questions and answers after loss to India in press conference

It was India's third win from four games in the competition, which has now put them at the top position of the Group 2 points table in the Super 12s round. A win in their final Super 12s clash against Zimbabwe in Melbourne on Sunday would confirm their spot in the semi-finals. Bangladesh will face Pakistan in their last game of the round, and would rely on other results to have any chances of a top-two finish in the group.