Hardik Pandya impressed one and all in the three-match ODI series against England.
By Darpan Jain Mon, 18 Jul 2022 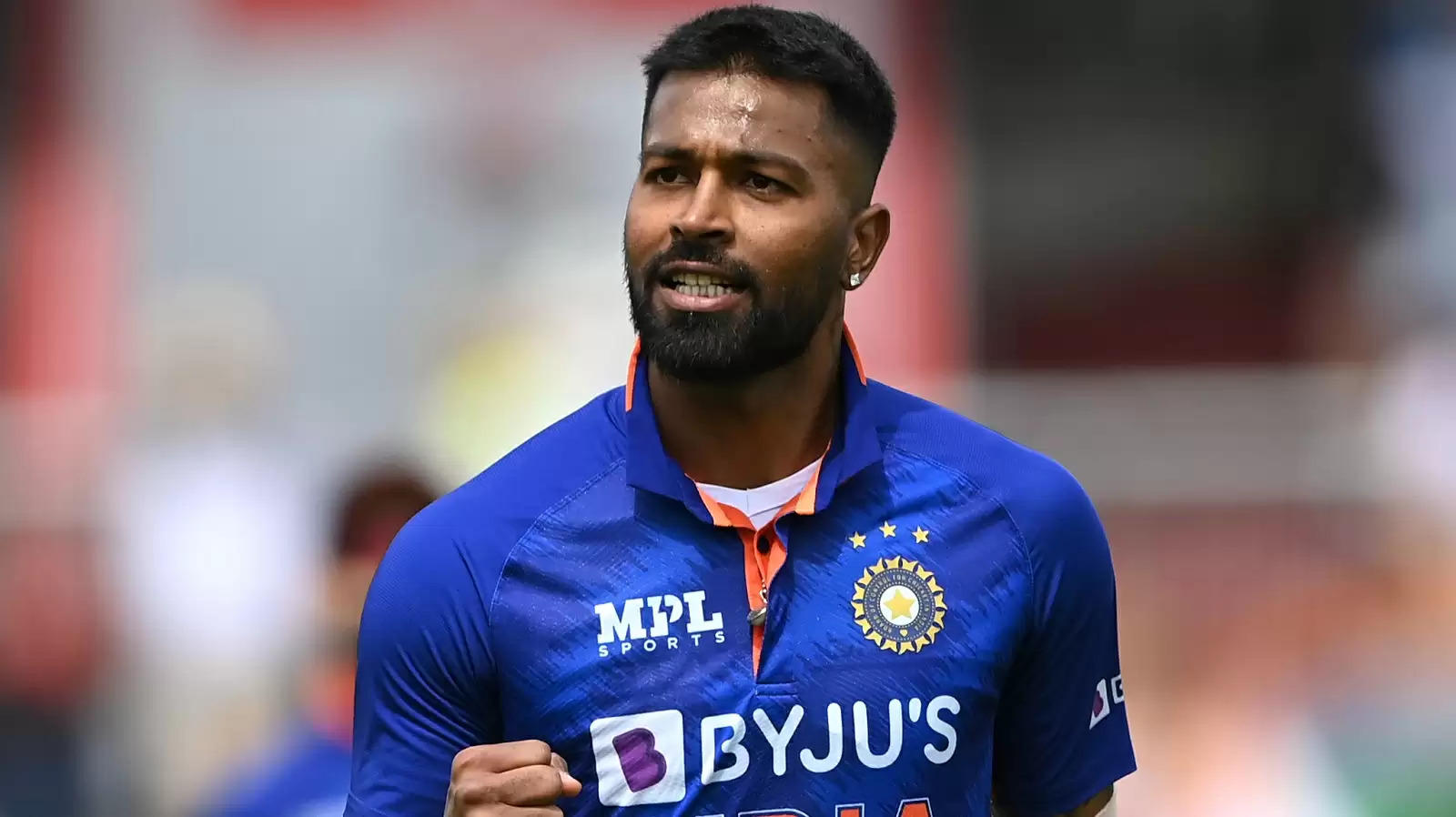 Hardik Pandya looked in complete control and rhythm throughout the white-ball leg against England.

There was never really any doubt over the bowling potential of Hardik Pandya. Ever since he made his debut, Hardik could hit the surface hard and unsettle the batters with his pace. No wonder he was just the right man to lend the desired balance to the team.

But fitness woes, particularly that tormenting back injury, were a severe impediment to his bowling smarts. For two consecutive seasons, the 28-years old played only as a batter in the Indian Premier League (IPL) in 2020 and 2021. He was even warned by the chief selector Chetan Sharma that he won't be considered for the national selection unless he is 'bowling fit'.

Come July 2022, and Hardik Pandya is again an imperative member of Men in Blue's white-ball setup. It took him just a few matches to make an impact and prove his worth again. While his batting has obviously been admirable, his bowling exploits have given more assurance for several reasons.

In the three-match ODI series, Pandya snared 6 wickets at 12.33 runs apiece against England. He took around 17 balls for each wicket and conceded only 4.35 runs per over. There is much more to take away from his bowling heroics than the numbers alone. The rhythm, quality and execution of plans remained flawless.

There has been much emphasis on the necessity of hit-the-deck speedsters who can operate effectively in the middle overs. While that is obviously an arduous job, there are such specialists in every team. But, for India, it's an all-rounder - with superlative batting expertise - effectuating that drudgery.

The Indian team did have Prasidh Krishna in the fold do do that alongside Hardik, as the former had done against the same opponents last year. As for the 2022 English summer, Hardik was a class apart.

The Gujarat-born accomplished his enforcer's role with the utmost perfection. He steamed in and hit the back of a length and short balls impeccably. His rising pace had only compounded the misery for premier England batters.

Hardik saved his best for the all-important decider. When he first came to bowl, Jason Roy and Ben Stokes were dealing aggressively despite Jonny Bairstow and Joe Root being dismissed for nought earlier in the innings. By the time he started his spell, Hardik had already got a fair idea of the conditions and planned his way forward.

After bowling a good length delivery first up, Pandya bowled slower balls into the pitch, just outside off, cramping Roy for the room. With the kind of batter he is, Roy was certainly aiming to break the shackles. This was a repeat of the first T20I at Southampton, where Roy had succumbed to Hardik's short ball. As premeditated, Roy played a compulsive pull on a back of a length delivery. But, since there wasn't any room, the ball found the top edge of the bat, landing in Rishabh Pant's glove.

His next prey - Ben Stokes - was dismissed off what was probably the best ball of the game. The southpaw was in a mood for counter-attacking and looking to unsettle the pacers' length by occasionally charging down the track, as he had done in Tests earlier in the season. He would have assessed Hardik's plan from the initial burst.

Stokes again tried to take Hardik off by charging down the track in his third over. The pacer saw that and tweaked his line from just outside off to outside leg stump shrewdly. That line created a blind spot for the Englishman, and the length was short enough to cramp him. The ball zipped off the surface sharply and could only meet the upper edge of the Stokes' bat, who tried flicking off this nasty delivery. Hardik didn't even need any support from the fielders as he grabbed an easy catch running forward.

When Hardik returned for his second spell in the 35th over, England still had the dangerous Jos Buttler and Liam Livingstone at the crease. Hardik had the onus to get rid of them to enable India restrict the hosts to a below par score.

The Liam Livingstone vs Hardik Pandya battle was one of the highlights of the limited-overs leg. Both are adamant about their modus operandi, forming a fascinating contest. And another duel kicked off right away when Hardik bowled a short delivery the right-hander.

Livingstone loves shifting on the off stump to hit the shorter length balls behind square. He tried doing that on the first ball itself and was unsuccessful. He ducked the next ball, which was relatively fuller than the previous one.

On the third attempt, Livingstone finally managed to pull one to the deep square leg for a 76m six. A flurry of short balls continued as Hardik managed to smack on the batter's helmet. In his next over, Liam again hit a 88m six to another short ball.

Most of the bowlers will push their lengths a tad fuller after this, but Hardik stuck to his plans to eventually get the better of Livingstone.

Another ball landed halfway, and Livingstone could only manage to place it in Ravindra Jadeja's hand at backward square. The bowler wins the battle, as is the case on most occasions. The witty smile on Hardik's face after the dismissal summed it all..

"Livingstone likes to take on the short ball and that gives me goosebumps, he hit me for two sixes but I told my captain even if I go for four sixes here, if I take a wicket, it will make a difference," exclaimed Hardik about this intriguing battle.

And he was not done just yet. In the same over, the speedster also dismissed the well set Jos Buttler. This dismissal depicted that Hardik's short balls are well-planned and not just bowled for the sake of it.

While the other balls were on the off stump or just outside off stump line, this wicket delivery was a tad more outside off. Buttler attempted to lug that short ball to the mid-wicket region. It didn't have the required power, and Jadeja again plucked an excellent catch.

Hardik registered his career-best figures (7-3-24-4) in the ODIs. After having never bowled multiple maiden overs in an innings before, produced three in the last game. If someone asks for a classic enforcer's spell, this might be the perfect one to display.

Hardik Pandya bowled 69% short balls and around 19% short of a length balls in the innings. The short balls fetched him three wickets, and the remaining wicket came off the back of a length delivery.

And mind you, that's not new for him. Hardik Pandya likes keeping the lengths shorter like anything. That's his go-to length in any format of the game.

"I love short balls," said Hardik in the post-match presentation. "Don't fancy people taking me on. Gets me into the game. Don't mind getting hit for six sixes also if I can get a wicket."

The wicket in Manchester was ideal for his bowling type. It had the bounce and the zip for hit-the-deck bowlers. And Hardik Pandya just exploited that perfectly and presented an exhibition of his bowling dexterity.

In the ODI series against England, Hardik Pandya conceded only 7 boundaries, the lowest he has ever had in a series with a minimum of 10 overs bowled. It never felt like he was bowling after almost a year in the ODIs (last bowled vs Sri Lanka in July 2021). His rhythm is palpable from his run-up and the followthrough.

The team has also managed his workload very well. Like in the third game, Hardik was given an extended break after a four-over spell even when he was in rhythm.

"The captain has been fantastic on when I should bowl and when I should not, he has handled me nicely," said Hardik in the mid-innings break.

He would then feature in a game-defining 133-run fifth wicket stand with Rishabh Pant, scoring 71 off 55 with 10 fours, and walk away with the Player of the Series award.

Should India's premier all-rounder remain injury-free, they'd boast a formidable line-up for the T20 World Cup in October-November in Australia, and the ODI World Cup at home next year.