FBA vs SYL Dream11 Prediction: All you need to know about the BPL 2023 match between Fortune Barishal and Sylhet Strikers.
By Kaushik Kashyap Sat, 7 Jan 2023 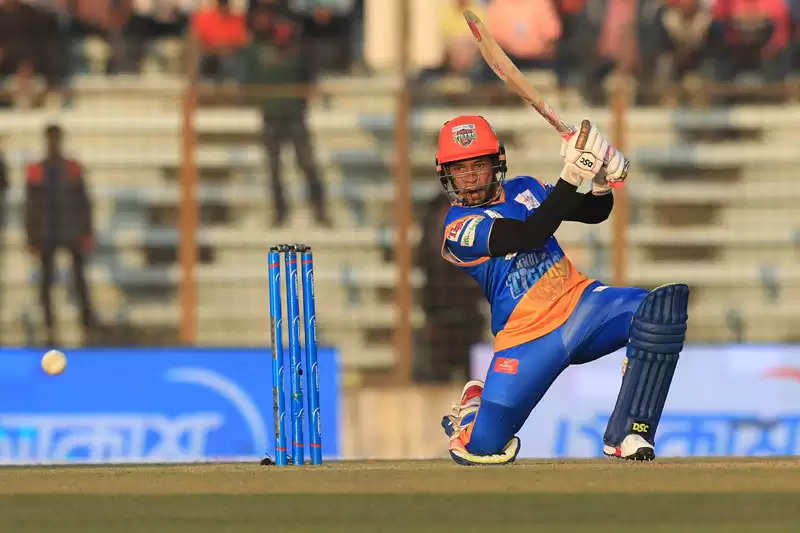 Fortune Barishal will kick-off their campaign against Sylhet Strikers in Match 4 of the Bangladesh Premier League 2023.

Barishal finished top of the tables last season but failed to lift the title as they lost the final against Comilla Victorians. Shakib Al Hasan continues to be their captain for this season and will look to complete the unfinished business this time. Barishal won the only match against Sylhet last year and will be looking to repeat the same to start their 2023 campaign on with a win.

Meanwhile, Sylhet Strikers will be playing their second match of the season after winning the season opener against Chattogram Challengers. The young seamer Rejaur Rahman stole the show on match day one with a four-wicket haul to restrict the Challengers for a paltry 89/9. With the bat, Najimul continued his good form and remained unbeaten on 41. The Strikers finished at the bottom of the table last season and got themselves to prove themselves this season. They have started their campaign with a win and will be hoping to continue their momentum and make it two in two in this match.

The pitch at the Shere Bangla National Stadium in Mirpur is a balanced one. This will be an evening game under and seamers might get early movement in the air. As the game goes, batting becomes easier and anything around 150 is chasable. The average first innings score is aroun 150 and the team winning the toss should be bowling first.

The weather forecast in Mirpur looks brilliant throughout the day. There are no chances of any rain during the time of this match,

No updates on injuries or unavailability of players reported from Sylhet Strikers.

Fortune Barishal should start this match as favorites. Even though Sylhet Strikers already played a game and are more familiar with the conditions, Fortune Barishal has a very nice balanced team to counter any opposition.

Shakib Al Hasan: Shakib Al Hasan needs no introduction as the Barishal’s captain is easily one of the top captaincy choices not only for this match but for the entire tournament. The veteran all-rounder was the third highest wicket-taker last year with 16 wickets in 11 games. In addition he was also the second highest run scorer amongst the Bangladeshi players after Tamim Iqbal with 284 runs at a strike rate of 144, including three half centuries.

Mohammad Amir: Mohammad Amir started the tournament with 2 for 7 in his four over spell against Chattogram Challengers on Friday. He has an amazing T20 record at the Shere Bangla Stadium in Mirpur. In 17 T20 BPL matches at this venue, Amir has 29 wickets at an astonishing strike rate of 13.3. He took an amazing 14 wickets in his last BPL season back in 2019-20.

Najmul Hossain Shanto: Shanto is the only second Bangladeshi player who has two T20 centuries at the Shere Bangla Stadium in Mirpur. He will be a top captaincy choice for this match as the Strikers’ opener was top run scorer in the first match of the season. He scored an unbeaten 43 and started the season on a high. In addition he has almost 1500 runs at this venue with two centuries and six half centuries. He also had a brilliant second half of 2022 and was the highest run scorer for Bangladesh in the T20 World Cup.

Khaled Ahmed: Khaled Ahmed will be a very good differential pick for this match. Khaled took 10 wickets in 7 matches last season at an impressive strike rate of 16.8. Considering the conditions in Mirpur, Khaled might come out as a very smart pick with that price and the less percentage of fantasy teams featuring him at the time of writing this.

Kamrul Islam Rabbi: Kamrul is another player you can keep as a differential pick for this match. He had an outstanding last year in the BPL where he took 11 wickets in 7 matches at a strike rate of 13. In addition, he has a very impressive record of 40 wickets in 31 T20 matches in Mirpur. Definitely a top differential choice to keep for this match.

Akbar Ali: Akbar Ali does not bowl and bat way down the order for Sylhet Strikers. It is advisable to not pick him in any of your fantasy XIs for this match. 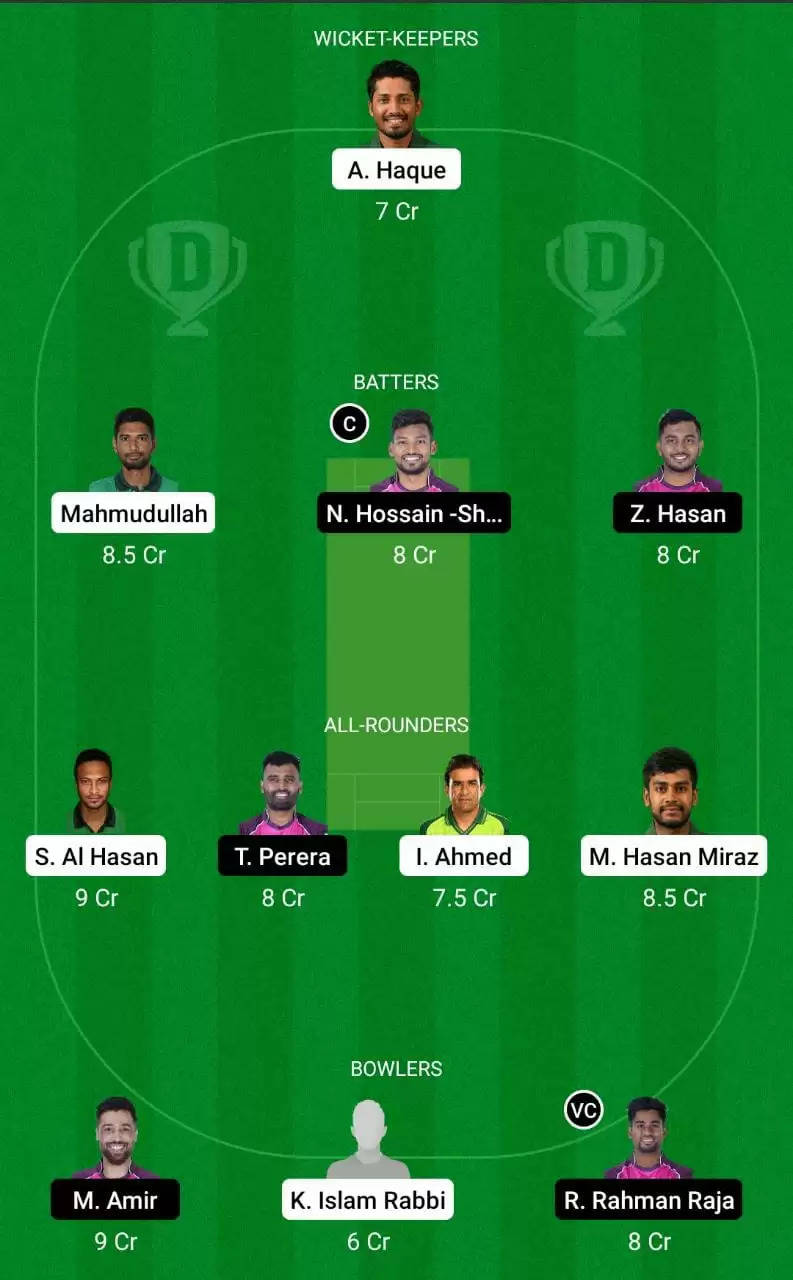 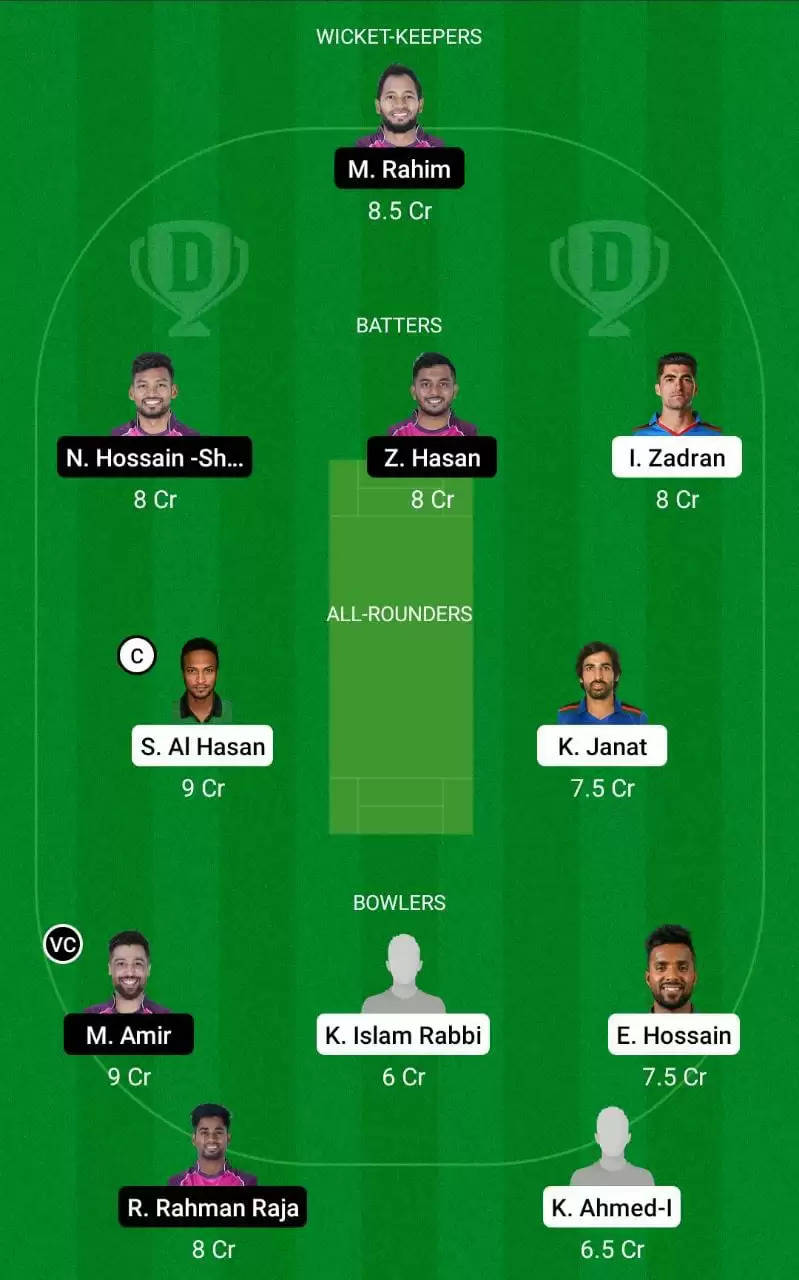