HUR vs STA Dream11 Prediction: All you need to know about the BBL 2022-23 match between Hobart Hurricanes and Melbourne Stars.
By Kaushik Kashyap Mon, 9 Jan 2023 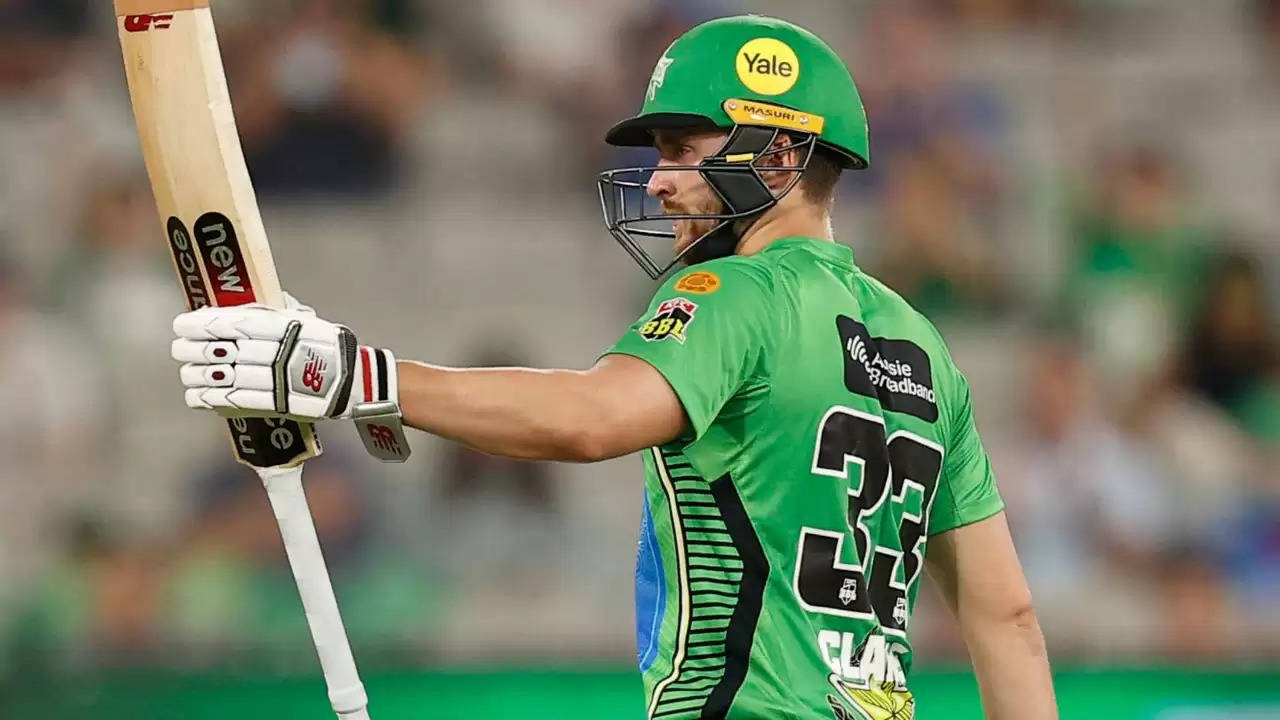 The Hobart Hurricanes have constantly been on and off throughout the tournament. They are currently placed 6th in the points table with three wins and five losses. They have done comparatively well at home, having won both the games played this season at the Bellerive Oval. With more than half of their remaining fixtures being at home, the Hurricanes will be hoping to comeback to winning form and make a chance for themselves for the knockouts.

On the other side, Melbourne Stars have managed just two wins out of eight games this season. As a result they are sitting at the bottom of the table with their chances of playing the knockouts almost over. They have further lost Stoinis ahead of this game who is down with a low-grade hamstring strain. The Stars won their last match against the Hurricanes this season and will be hoping to repeat the same performance this time.

The pitch at the Bellerive Oval in Hobart is a balanced one. It has shown different behaviors in two matches played this season. It always helped the seamers throughout the innings. Batters do find it difficult sometimes but if settled can go on to score big runs. The par total on this pitch is around 160. Team winning the toss should bowl first on this wicket.

The weather forecast in Hobart looks brilliant throughout the day. There is no rain predictated during the match time..

Tom Andrews and Chris Tremain came into the Hurricanes’ squads. Billy Stanlake is ruled out of the tournament due to a hamstring injury. Matthew Wade will not be available for this match due to personal reasons.

Marcus Stoinis is ruled out of this match with a low-grade hamstring strain.

Both the teams have lost their respective last two games. However, the home team Hobart Hurricanes is expected to win this match.

Ben McDermott: Ben Mcdermott is a top captaincy pick for this match. The vice captain of the Hurricanes scored a brilliant half century in his last game at the venue earlier in the tournament. However, he also has good records against the Stars whenever they visit to play at the Bellerive Oval. McDermott has 270 runs in 5 innings against Stars in this venue at an average of 54.

Riley Meredith: Riley Meredith has 11 wickets this season. Including a match winning 3-wicket haul at the Bellerive Oval. Even in the last game against the Stars in Hobart, Meredith took three wickets and was one of the top-wicket takers. He will be an excellent captaincy choice for this match. Melbourne Stars are averaging only around 10 against Right arm fast bowlers, making Meredith one of the bowlers to watch out for in this match.

Nick Larkin: Nick Larkin can be a top differential pick for this match. He has not done much this season but with Stoinis absence Larkin might get to bat more in the middle. He will cost a 6.5 CR and is featuring in only 11% of the fantasy XIs at the time of writing.

Paddy Dooley: The left-arm chinaman is currently the highest wicket-taker for the Hurricanes. However, he has not been featured in the fantasy XIs lately so it is advisable to keep him as one of the best differential picks for this match.

Beau Webster: Webster has been an important player for the Stars this season but his record at the Bellerive Oval is not convincing. In six innings at the Hurricanes’ home ground, Webster has only 33 runs and averages 5.5. It is advisable to avoid him from picking in your XIs for this match. 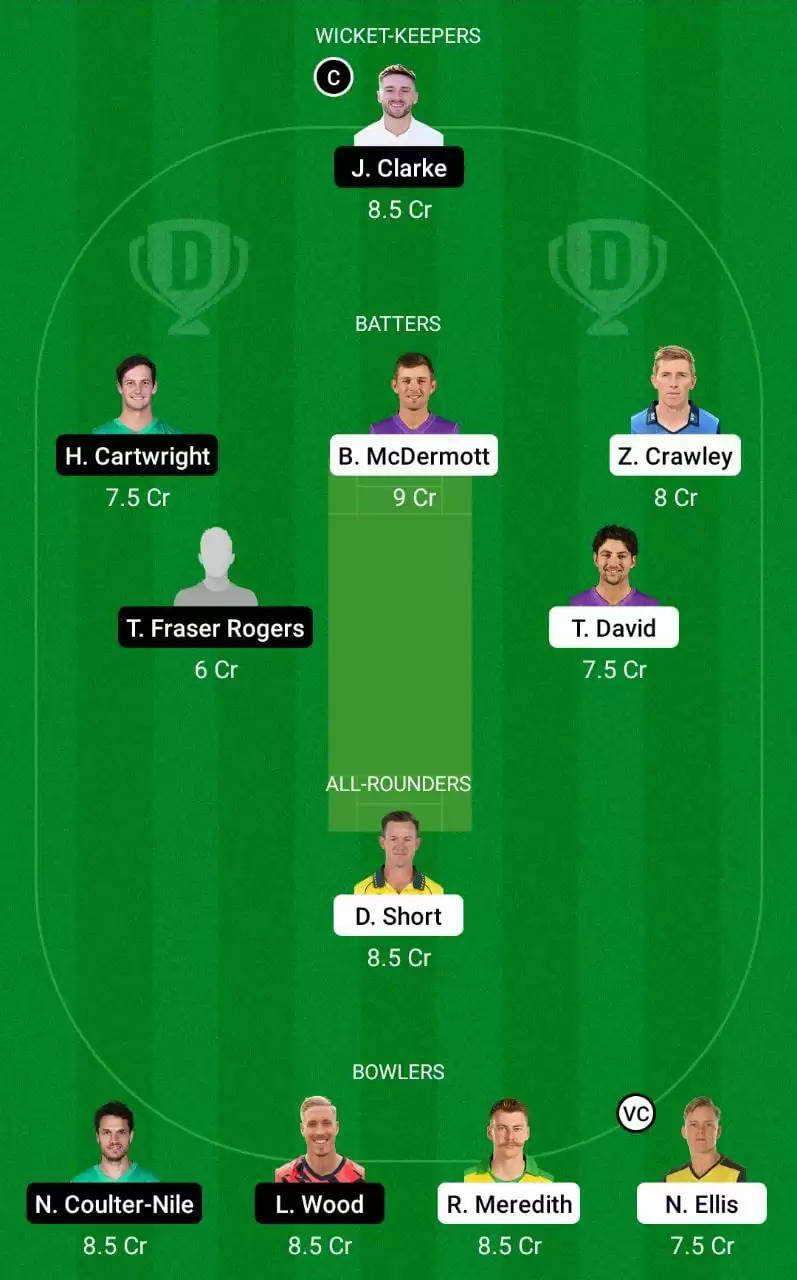 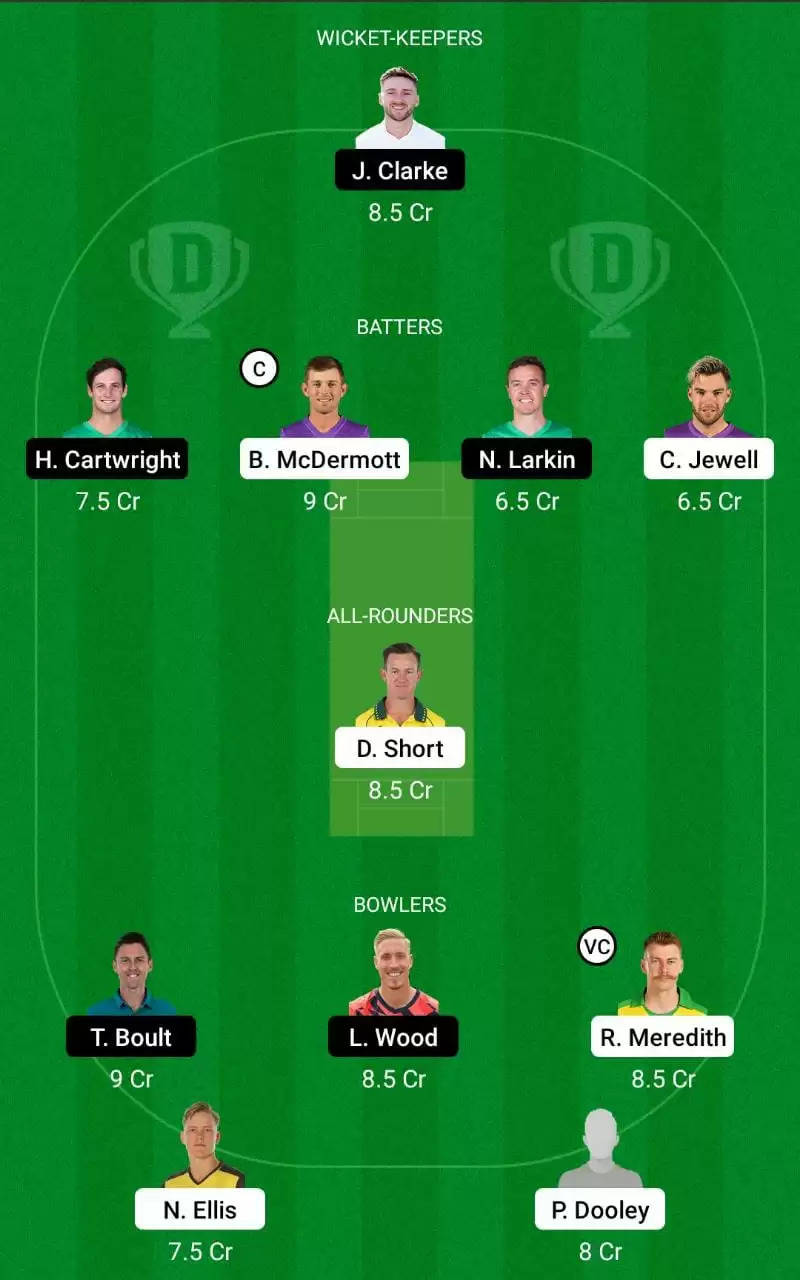