MUM vs TN Dream11 Prediction: All you need to know about the Ranji Trophy 2022-23 match between Mumbai and Tamil Nadu.
By Kaushik Kashyap Tue, 3 Jan 2023 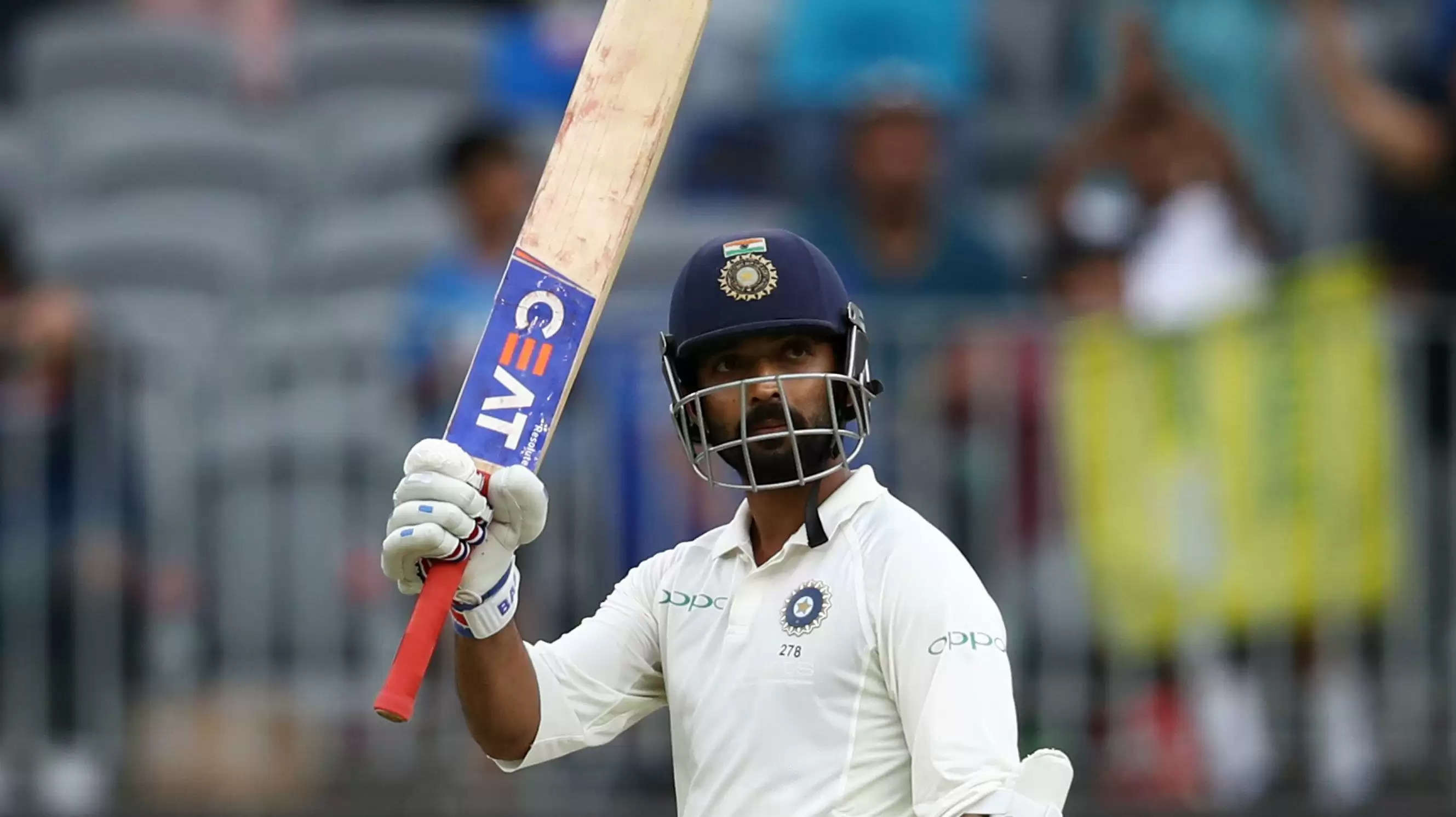 Mumbai is taking on Tamil Nadu in their Round 4 fixture of the ongoing Ranji Trophy 2022-23 at the Brabourne Stadium (Cricket Club Of India) in Mumbai.

Mumbai started their Ranji Trophy campaign with two wins in a row but are coming into this match with a defeat against a quality Saurashtra side last week. Ajinkya Rahane and his men must be disappointed with the result in the last game and will be looking to get back to winning form. Their batting looks too good with a star-studded lineup. Prithvi Shaw has two centuries in two games against Tamil Nadu in his first class career. He is having a quiet tournament so far and will be desperate to get a big innings in this match. Armaan Jaffer is expected to bat at three in this match as Suryakumar Yadav is unavailable due to his national duties. Overall, their batting looks fine with the likes of skipper Rahane, Sarfaraz Khan and with Tanush Kotian back in the squad there is immense depth in this batting. Shams Mulani will continue to be the leader of their bowling as the left arm spinner has been their biggest match winner in the recent past. Last season’s runners up are sitting at the top of group B with 13 points in three matches.

On the other hand, Tamil Nadu has not got the best of starts and are currently placed at 6th position with 6 points. They have not won a single game out in the tournament so far and have only managed to get first innings lead in two matches and lost one against Andhra. Moreover, they will miss the service of Washington Sundar who has been replaced by Shahrukh Khan in the squad. Their batting revolves around Narayan Jagadeesan, Sai Sudharsan and the Baba brothers. Sandeep Warrier has been brilliant with the ball and will be one of the players to watch out for in this match. Even though Tamil Nadu has not been their best in the first three games, they can turn it all around if they can manage to win against this Mumbai side.

Match: Mumbai vs Tamil Nadu, Round 4

First class cricket will be back at the Brabourne Stadium (Cricket Club of India) in Mumbai after more than six years. The condition of the pitch in the recent past is unknown. However, traditionally it is a very good wicket to bat on in the first innings and might have something for the seamers initially. As the game progresses batting gets difficult and wickets fall in bunches. The team winning the toss will be batting first.

The weather forecast for the next four days in Mumbai looks very good. There is no chance of any precipitation during the time of this match.

Left arm spinner Dhrumil Matkar replaces Suryakumar Yadav in the Mumbai squad for this match who will be unavailable due to national duties.

Tanush Kotian is also back to the Mumbai squad after missing the round 3 match against Saurashtra last week.

Washington Sundar is in India’s T20I squad to play against Sri Lanka and is replaced by Shahrukh Khan in the Tamil Nadu squad for this match.

Mumbai should start the match as favorites. They are playing at one of their home grounds and Tamil Nadu has not managed to win any match this season. In the last five meetings between these two sides in Ranji Trophy, Mumbai has managed to win three times and the last two games were finished as a draw.

Shams Mulani: Shams Mulani continues to be the biggest match winner for Mumbai in Ranji Trophy. The left arm spinner is having another dream season as he has 24 wickets at an average of 18.08 in three matches so far. He is coming into this game against Tamil Nadu with 10 wickets in total in the last match against Saurashtra. In addition his batting ability down the order makes him one of the best captaincy choices for this match. When last time these two teams played each other in Ranji Trophy, Mulani was the highest wicket taker for Mumbai with 4 for 72 in the first innings and added 87 with the bat as well.

Sarfaraz Khan: Sarfaraz Khan is one of the hot names in first class cricket in India currently. After a dominating last season, runs continue to flow from the 25-year-old bat this season for Mumbai. Sarfaraz has 226 runs at an average of 75.33 with a century against Hyderabad.

Sai Sudharsan: Sai Sudharsan is having a dream debut season for Tamil Nadu in Ranji Trophy. He scored centuries in the first two games and is currently the highest run scorer for his side. He has 420 runs at an average of 70 in six innings.

Sai Kishore: Sai Sudarshan has been selected in only 15% of the fantasy teams ahead of this match. He is currently the joint highest wicket taker of Tamil Nadu with 16 wickets at a strike rate of around 45. He has been the spearhead of the Tamil Nadu bowling lineup this season and is expected to play a crucial role against Mumbai in this match as well.

Baba Indrajith: Baba Indrajith is not having a great Ranji Trophy season so far as per his standard. Indrajith has 176 runs in 6 innings at an average of 44. He will be a great differential pick for this match considering his record against Mumbai. In six matches against Mumbai, Indrajith has 499 runs at an average of 62.37, including three centuries and a half century. A big innings is due from the Tamil Nadu skipper this season, so it is advisable to keep him as one of the differential picks for this match.

Hardik Tamore: Mumbai’s wicket keeper bats way down the order in this Mumbai batting order. It is advisable to avoid him from picking in any of your fantasy XIs. 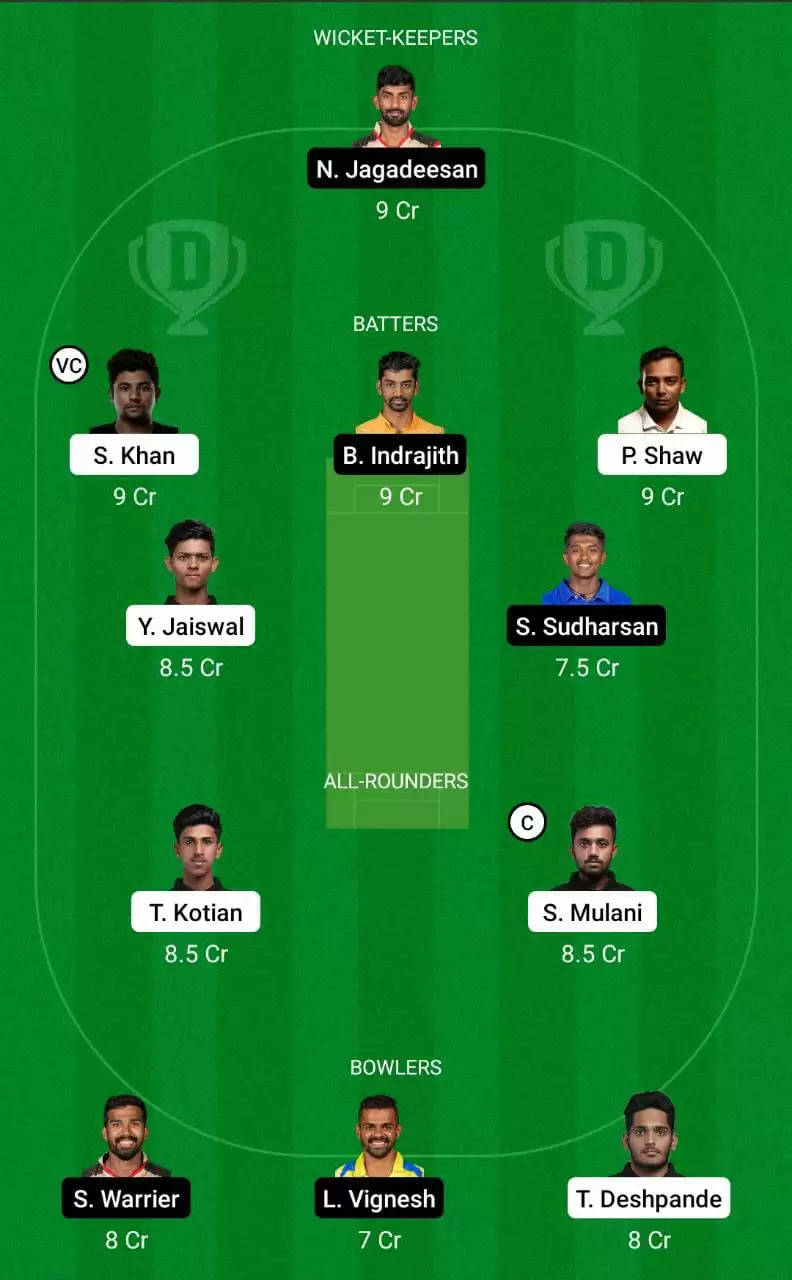 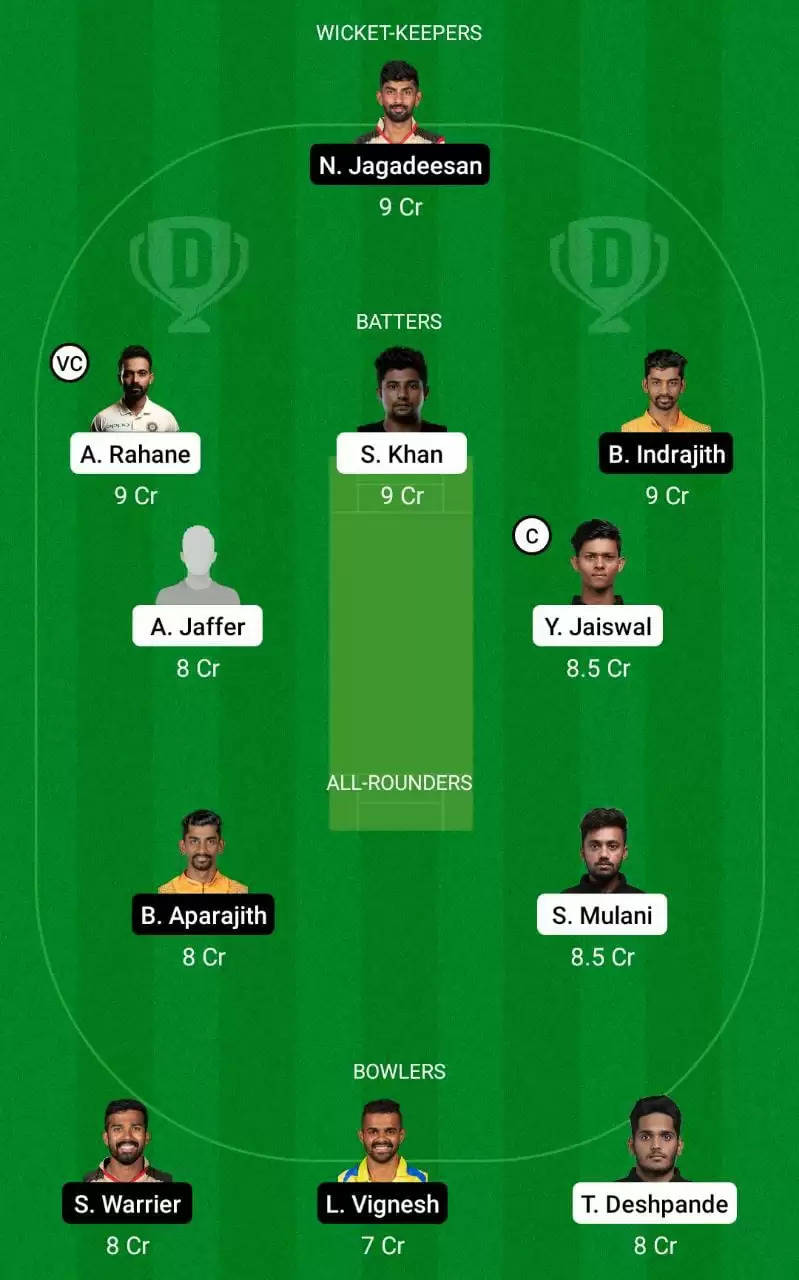