Get all the NED vs NZ Dream11 prediction and fantasy cricket tips for the second and final T20I between Netherlands and New Zealand to be played at Sportpark Westvliet, The Hague on Friday, August 5.
By CX Staff Writer Fri, 5 Aug 2022 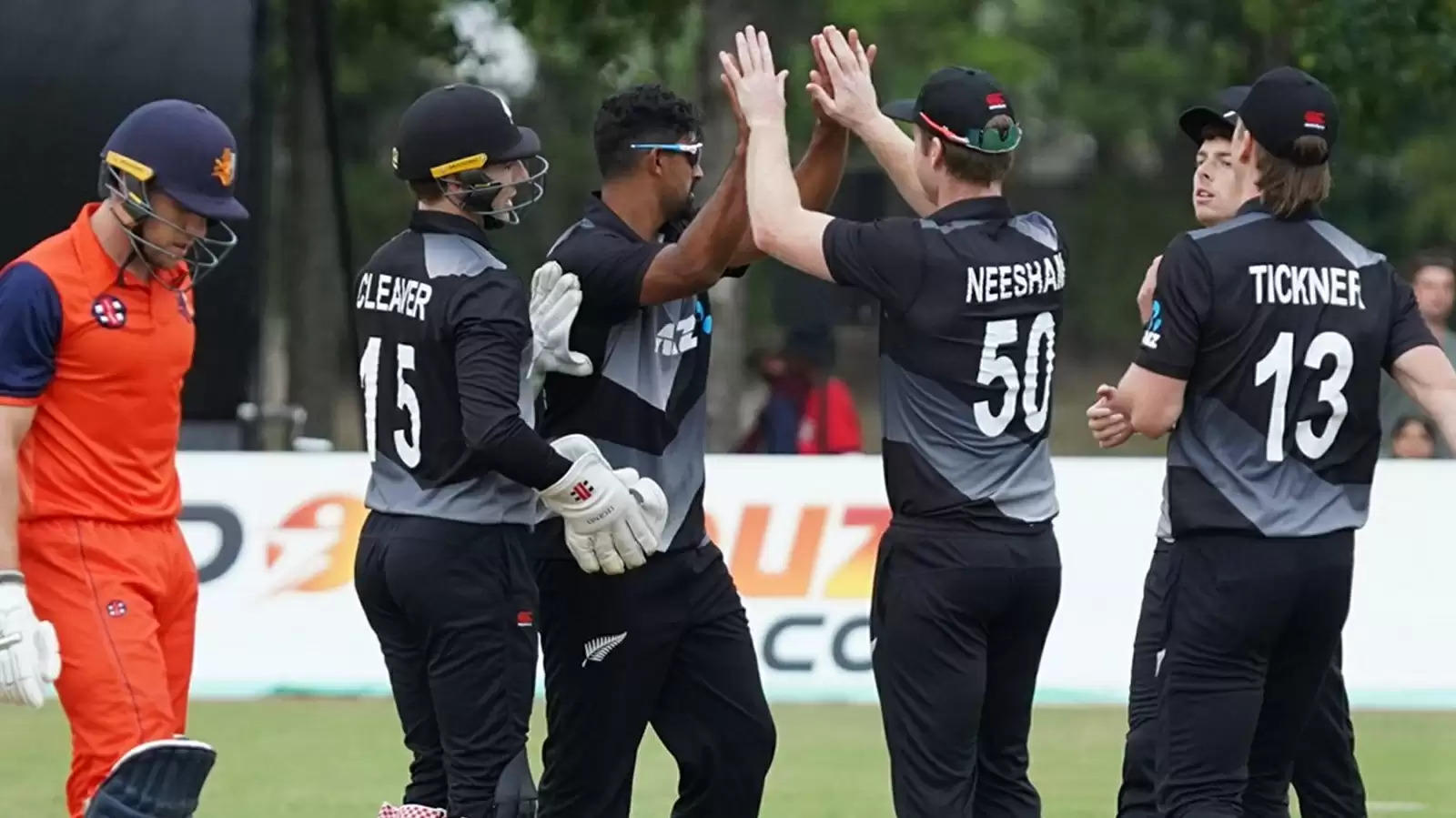 New Zealand might have won the first of two T20Is against Netherlands on Friday, but the hosts were competitive enough to challenge the T20 World Cup 2021 runners-up, albeit sans a number of their senior players.

An all-round bowling effort to restrict the Blackcaps to 148/7 was worth the praise, and the talented Bas de Leede almost single-handedly kept his side in hunt with a 53-ball 66. That’d give them enough confidence to improve on an impressive effort to try and alter the outcome in the decider on Friday.

New Zealand, meanwhile, would look to assess conditions better after having played on batting friendly surfaces in Ireland and Scotland recently. Blair Tickner and Ben Sears manage to stand out in an attack featuring Lockie Ferguson, and another successful outing would push their case further for a regular selection.

Martin Guptill had another start, but the wait for a significant score in the format continues.

NED vs NZ Venue and Pitch Report for 2nd T20I

The average first-innings total at the venue stood at 147 before the start of the first T20I, and New Zealand managed exactly one more than that. The surface could produce middling scores across both innings, with equal assistance for batters and bowlers. Batting might well get progressively difficult as the game progresses, and so, the toss could play its part. The six games played at the venue though, have produced like-like 3-3 results for the team setting or chasing a score.

Having won the first game of the series despite being challenged at various phases, New Zealand, with a well-rounded side will begin as favourites for the decider, as they did for the opener.

Finn Allen: Finn Allen, the swashbuckling opener came into the series with a sparkling hundred in the first T20I against Scotland last week and followed that up with a fifty in the ODI. He fell early on Thursday, but given his form, can be expected to put on a show in the decider. Allen could be the top captaincy candidate in your Dream11 team.

Bas de Leede: Bas de Leede has been highly impressive as an all-rounder in his young international career thus far, and was easily Netherlands’ standout performer in the first T20I. Back him to fetch you more points with either the bat or ball, if not both, in the second game.

Jimmy Neesham: Jimmy Neesham’s quickfire 32 helped New Zealand post a fighting total in the series opener, and he has been in great ball-striking form of late. A proper all-rounder, he offers a great chance to accumulating points with his right-arm seam too.

Blair Tickner (8.5 credits): Blair Tickner reduced the hosts to 15/3 with his opening burst, and came back to deliver the knockout punch, removing a well-set de Leede to complete a well-earned win for his side on Thursday. The right-arm quick would be filled with confidence to produce another such outing, and makes for a reliable pick in your Dream11 side.

Tom Cooper (8.5 credits): Tom Cooper might have managed just 2 in the first T20I, but his ball-striking ability is well known, as has been on show for Netherlands in a decade-long career so far, as well as in Global T20 Leagues. He’s a fine budget pick to have in your Dream11 team.

Max O’Dowd: The opener led the run-scoring charts in the ODIs against West Indies in June and followed that with two fifties from three outings against England. He was impressive in the ICC Men's T20 World Cup Qualifier thereafter, and the failure on Thursday might just be a one-off in an otherwise productive season. Max O’Dowd is a decent shout as a differential pick for this contest. 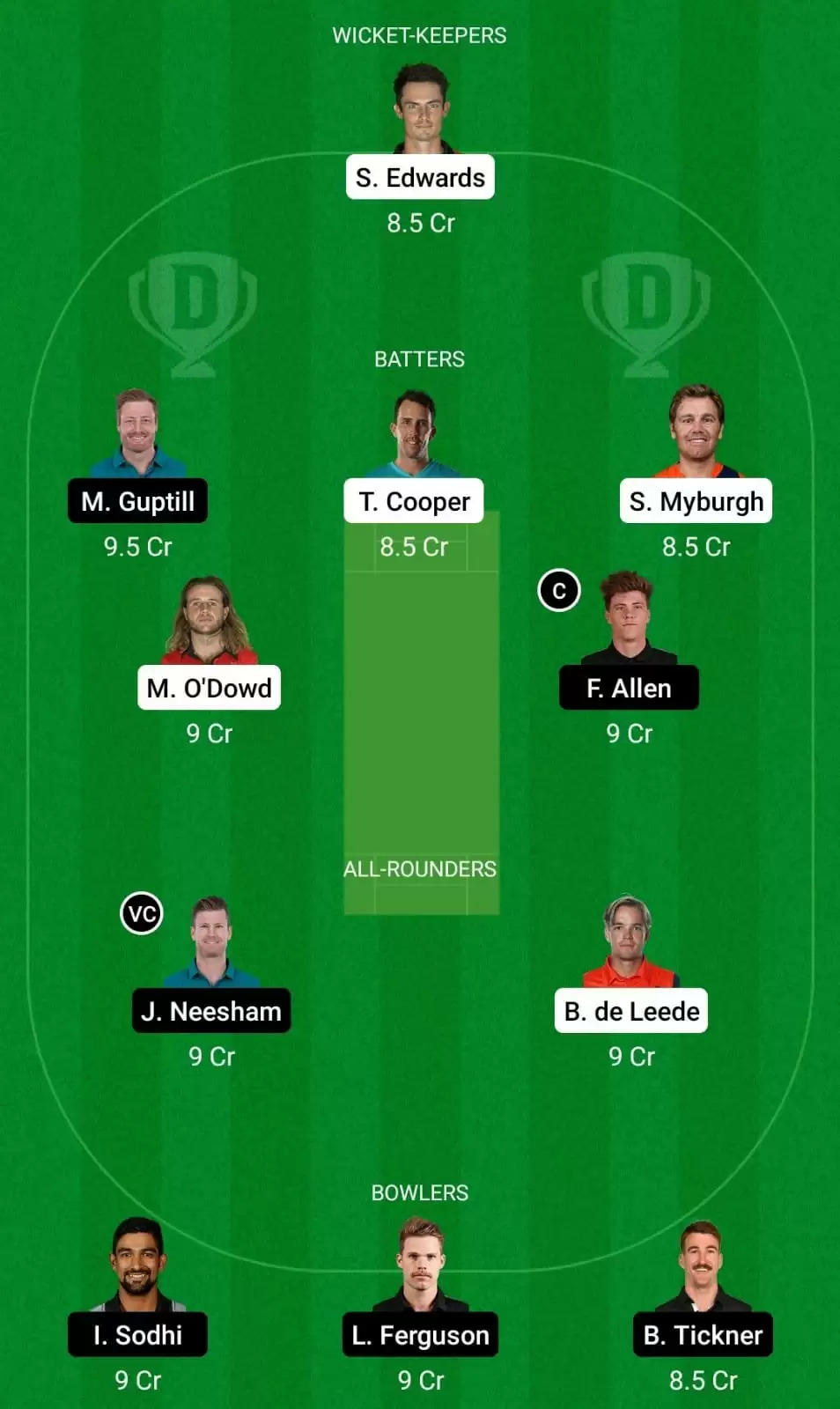 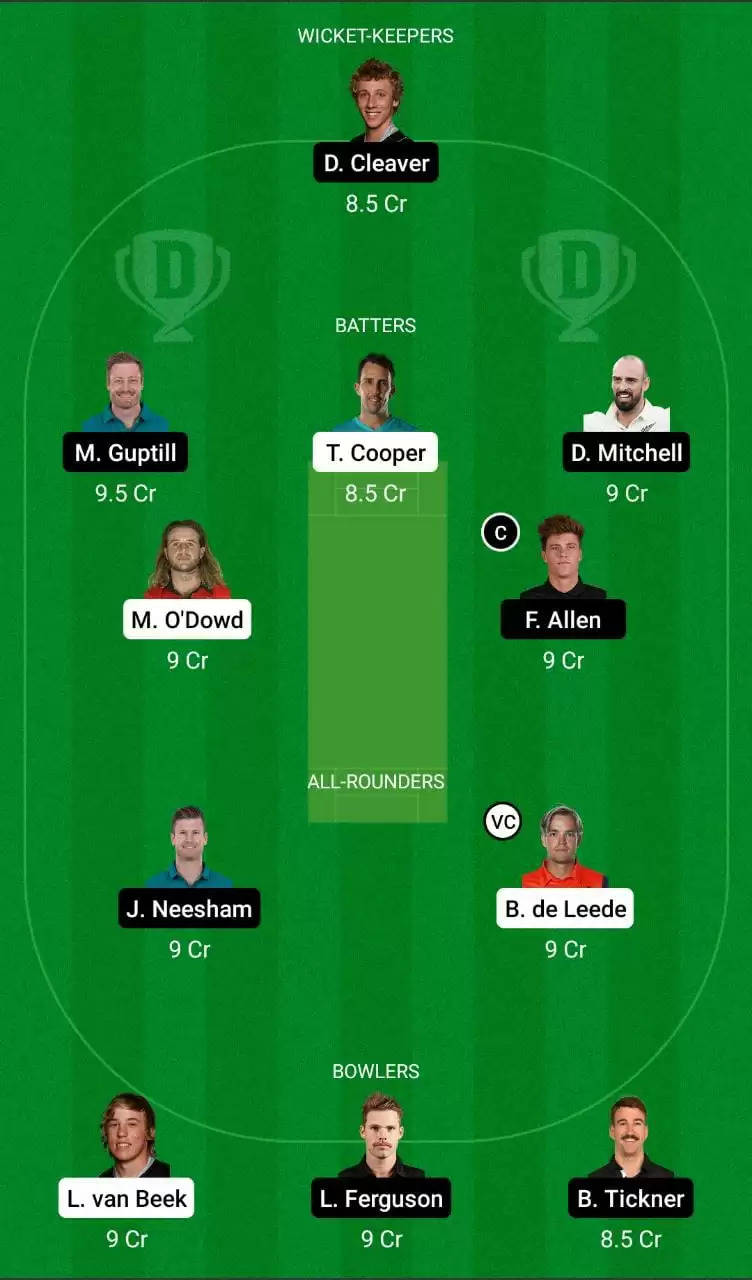 Which Contests to Join for NED vs NZ Dream11 Match

Joining small league contests of upto five to seven members are recommended from the small/head-to-head league team for the Netherlands vs New Zealand T20Is. Join Mega contest and all the other contests with a big prize pool with the mega league team.