India haven’t won the T20 World Cup since lifting the inaugural championship in 2007 and have often been criticised for their approach and team-selections. But should their quality really be questioned?
By Roshan Gede Sat, 6 Aug 2022 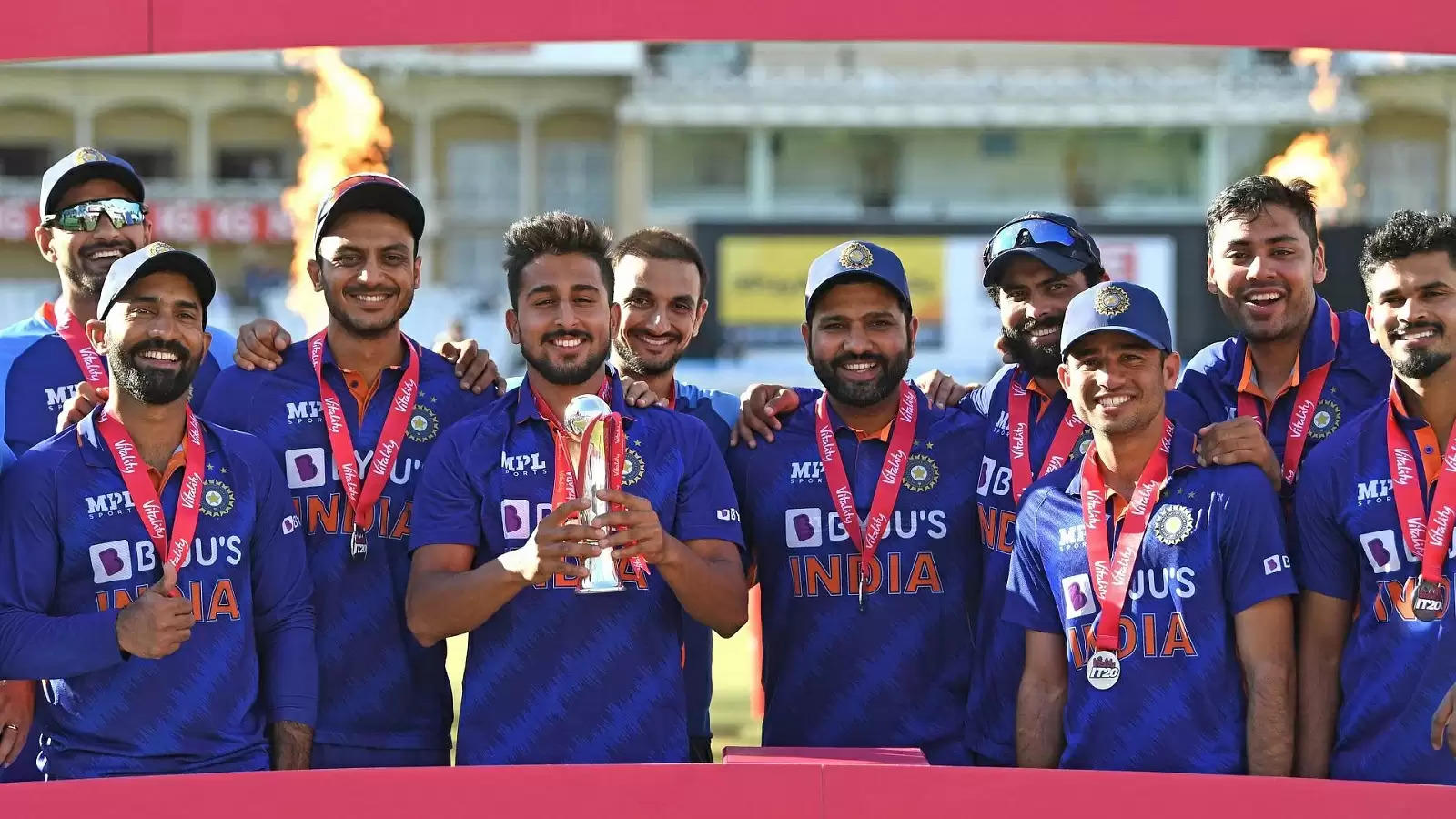 India have the best win-loss ratio in T20Is since 2020 (among full-member teams).

India aren't just a good T20I side, they are excellent!

It’s entertaining, it’s quick, but the T20 format is filled with a fair share of absurdity and weirdness. Let’s just narrow it down to the international format alone for the next six minutes to assess that further. The difference between the highest and lowest team totals till date, among full-member nations is … a staggering 233. Remove the elite filter and that difference rises to 257. That’s the range of extremities for a team score alone - the determinant of a game's result (unless you consider the 2019 ODI World Cup final, of course!) - in a format allowing only 120 balls per innings.

West Indies were skilled, and resolute, to win two World Cup finals from the unlikeliest of positions - the first, after being 14/2 and 32/2 at the six and ten-over marks, with three overs of peak Lasith Malinga remaining, the second, requiring a tough 19 off 6 (he managed that with two balls remaining!). Dig deeper into the more than 1,700 T20Is played for more of those intricate vagaries.

And so, it’s worth appreciating if a team excels over a sustained period in a format of such uncertainty even though a global triumph goes missing. India haven’t won the T20 World Cup since 2007, and the recency effect of the disappointing 2021 exit adds to the free-flowing criticism. They’re often dissed for not playing “the England way”, having far too many anchors on the batting front, muddled up selections, untimely resting of players, and so on. But does that make them a below-par T20I outfit?

None of the 11 teams to have played over 100 T20Is till date have a better win-loss average than India’s 2.03. That number elevates to a staggering three for all T20Is played since 2020, the best among full-member sides. Their only bilateral series defeat in 16 completed contests since February 2019 came against Sri Lanka last year, when they played a second-string team, and a covid-19 outbreak in the camp meant that Bhuvneshwar Kumar batted at No.6 in the final two games of the tour (which India lost).

India have the best all-time average runs per wicket (30.95) and average run-rate (8.43) in T20Is among full-member teams. The corresponding numbers since 2020 are 32.23 and 8.80 respectively, which again tops the lists, the latter being equal with England, who have played six games less in the period.

Post the 2021 World Cup exit, they won 12 matches in a row, and it took a 212-run chase by South Africa - the highest against the Men in Blue till date - to end that streak. The 12 straight wins sequence stands as a joint record alongside Afghanistan and Romania.

It’s worth noting that India is the only team in T20I history to have a win-loss ratio in excess of 1 against every team it has played against, with only England (1.2) and New Zealand (1.22) being allowed to get anywhere close.

That brilliant run since the start of 2020, featuring clean sweeps against New Zealand (5-0 away, 3-0 home), West Indies, Sri Lanka, and Ireland, and wins against England (2-1 away, 3-2 home) in Australia (2-1), came without significant contributions (consistently) from Virat Kohli - their best-ranked player in all-time T20I rankings and the Player of the Tournament at the 2014 and 2016 T20 World Cups.

The overall bench strength is one to marvel upon, especially on the batting front. Consider this: India will have to leave one of Rohit Sharma, KL Rahul, Virat Kohli, Suryakumar Yadav, and Rishabh Pant to narrow down their top four at the T20 World Cup 2022, on assumption that Hardik Pandya, Dinesh Karthik, and Ravindra Jadeja follow at No. 5, 6 and 7 respectively. Rohit and Rahul have six T20I hundreds between them, Kohli still averages above 50 while striking at 137.66, Suryakumar is the second-ranked T20I batter currently, and Rishabh Pant … well … is Rishabh Pant!

All of that with the Kishans, Hoodas, Samsons, Iyers, Shaws, and Gaikwads waiting in the wings.

Ravichandran Ashwin is up against the excellent Yuzvendra Chahal to take the lead spinner in the starting XI, while Harshal Patel or Arshdeep Singh could well force the management to sideline either of Mohammed Shami or Bhuvneshwar Kumar, with Jasprit Bumrah leading the pace attack.

So were those crushing defeats against Pakistan and New Zealand last year mere an aberration? Maybe, with a bit of misfortune fairly overlooked: India were asked to bat first on each of those occasions. 19 of the 30 Super-12s clashes of the T20 World Cup 2021, and the semi-finals and the finals were won by teams batting second. Seven of the 11 wins for sides batting first featured a full-member team pinned against either an associate nation or a lower-ranked Afghanistan.

During the second leg of the IPL 2021 in the UAE which preceded the World Cup, 21 of the 31 matches were won by the sides chasing. It took MS Dhoni’s experience and shrewd tactics for CSK to defend 192 in the final in Dubai, despite the KKR openers adding 91 in 10.4 overs, not to forget they were effectively a batter short with Rahul Tripathi injured. Perhaps, even in the shortest version, a lot is decided even before a ball is bowled!

Back to the present. India, under Rohit, have now adopted an ultra-positive approach to the format recently, and that might just add more to their flair and success, and put them in great stead ahead of the T20 World Cup, which is a little over two months away.

India's strike-rate in T20Is in the first 10 overs

The stunning numbers are made special by the fact that there are quality T20I sides around. Australia, the current World Cup winners are blessed with numerous match-winners, so too are Pakistan and England. South Africa drew the T20I series in India before defeating England recently, and just their one defeat in the T20 WC 2021 was enough to knock them out of the competition. New Zealand, the runners-up, have unearthed fine talents off late, and the West Indies prowess just can’t be overlooked. Despite all this, India have managed to be the distant standouts.

The recent ICC trophy drought, with the team often faltering at the decisive end has resulted in quite a lot of carp in recent years, overshadowing the success in an age of superabundant cricket. However, they are not the only team to experience this.

Cast your minds back to the Nineties, wherein the teams (especially in ODIs) were more closely matched by each other than in any other decade before or since. Pakistan, Sri Lanka and Australia won a World Cup each, while England made the 1992 final - each team boasting a number of game-changers.

West Indies, post the departure of Richards, Greenidge, and Haynes, were blessed to have Richardson, Hooper, Ambrose, and Walsh, not to forget a certain Brian Lara and a young Shivnarine Chanderpaul. New Zealand had Fleming, Astle, Harris, and Cairns succeed the Martin Crowe era. India were blessed to have a young (and maybe peak) Sachin Tendulkar, making the world game his own, among the rest.

But which team had the most sustained success in the 1990s?

No team had a better win/loss ratio than South Africa in Tests (2.23) and ODIs (1.803) in the period. Narrow those numbers to the period since their readmission and the difference between them and second-placed Australia in either format widens further.

That damned C word - its etymology in cricket brought about by the misfortune in 1992 and the mishaps of 1999 - often overshadows just how good Hansie Cronje’s (and earlier Kepler Wessels’) team was, featuring Allan Donald, Jonty Rhodes, Lance Klusener, young Jacques Kallis, Shaun Pollock, and Herschelle Gibbs among others. It’s never too late to acknowledge that contingent’s collective brilliance in an era the Tendulkars, Warnes, and Laras took the world by storm, as did Wasim and Waqar.

And so, it’s worth appreciating India’s success in the format that brings the competing teams even closer than in the other two. That brilliant run, especially since the start of this decade, would take some beating.

World Cup win or not, India are a world-class T20I side.

Could India’s problem of plenty hurt them in another T20 World Cup year?