The T20 Blast final witnessed unprecedented drama last night with Hampshire nearly having a heartattack in a thriller.
By Staff Writer Sun, 17 Jul 2022 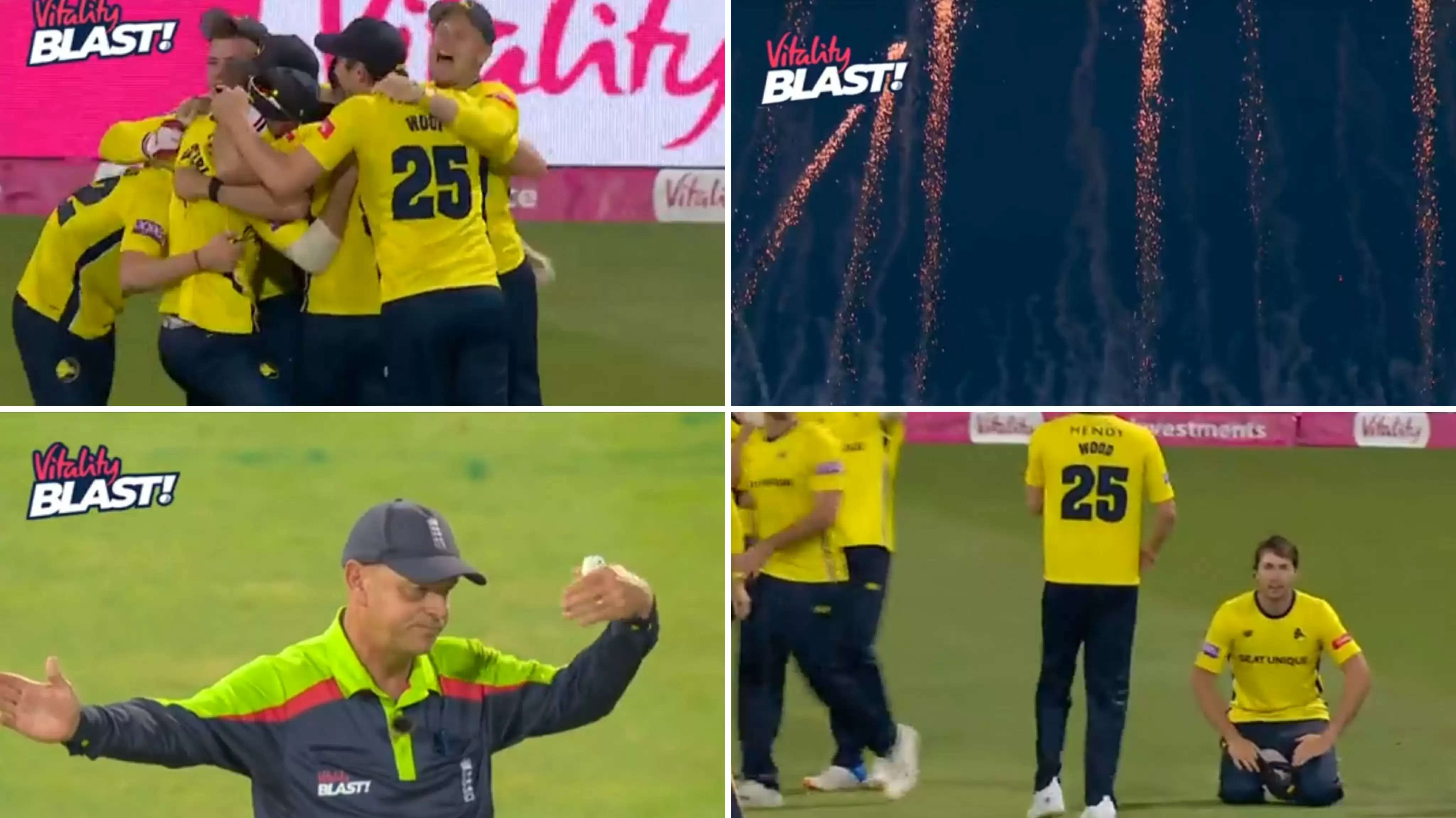 The celebrations were on in full swing, the fireworks had lit the night sky, but the umpire was in no mood to have some fun as the T20 Blast final between Hampshire and Lancashire witnessed spectacular drama.

With 11 needed off the final over, Lancashire were up against Nathan Ellis. The equation reduced to five runs needed off one ball when Ellis cleaned up recent England debutant Richard Gleeson.

Hampshire were up in a huddle celebrating. The screen showed Hampshire winning by 4 runs and the fireworks had burst with fans celebrating a cracking win. But no, it wasn't to be..at least not yet.

The umpire called back the players signalling a no-ball and Hampshire were left shell shocked as they had to rebowl the final delivery. A hopeful Lancashire camp, however, was left distraught as Ellis held his nerve to bowl a fine delivery and resume celebrations for Hampshire.

Watch the drama in the T20 Blast final

The Vitality Blast witnessed the most epic scenes last night as the title celebration fireworks were stopped midway with the umpire calling a no-ball! 👀😱

Shell-shocked Hampshire, though, managed to hold their nerve to resume celebrations #Blast22pic.twitter.com/xTyVxlU06T

The drama didn't end there with Lancashire captain Dane Vilas later stating that there was an umpiring error off the very final ball. The umpire declared dead ball when wicket-keeper Ben McDermott took out the stumps at the striker's end off the bye to finish the game with Lancashire one run short.

However, Gleeson and Tom Hartley were still running and the keeper hadn't dislodged the bails before the non-striker reached the striker's end. McDermott did run to the non-striker's end to stop the second run but was merely handed a stump already uprooted by Mason Crane in celebration.

According to Blast conditions, if there's a tie, the team with more wickets remaining wins. In this case, both teams had equal wickets lost. In such cases, team with higher powerplay score wins, which was Lancashire in this case.

McDermott runs down the wicket, ball in hand. A fielder has broke the stumps at the other end and passes him the stump. To legitimately run Hartley out McDermott needs to pull another stump out which he doesn’t?! @lancscricket #FinalsDay pic.twitter.com/Fb1XaQ2gCG

McDermott runs down the wicket, ball in hand. A fielder has broke the stumps at the other end and passes him the stump. To legitimately run Hartley out McDermott needs to pull another stump out which he doesn’t?! @lancscricket #FinalsDay pic.twitter.com/Fb1XaQ2gCG

"We thought the ball was still live and Tommy came back for two," Dane Vilas, Lancashire's captain, said. "There was a little bit of confusion out there but the umpires called the ball dead as soon as they took the stumps [bails] off at the striker's end."

According to Law 20.1.2, "the ball shall be considered to be dead when it is clear to the bowler's end umpire that the fielding side and both batters at the wicket have ceased to regard it as in play."

Everything was going on out there at that stage. I can't be 100% sure of what was said exactly, but we thought maybe we could have had a look and seen if it was a review or something, but it obviously wasn't and ended up being called as a Hampshire win."

"They [umpires] look for everything else," he said. "Ultimately it's their decision, and their decision is final. As players we know that and respect that so we just need to move on with it. It is what it is."

Hampshire captain James Vince, though, ended the debate saying it was "obviously" dead when the stumps were broken at the striker's end. While Hampshire will still remain winners, the MCC could release a statement on the massive confusion.