Fans were left puzzled after Ambati Rayudu deleted a tweet that carried his retirement announcement from the IPL.
By Kashish Chadha Sat, 14 May 2022 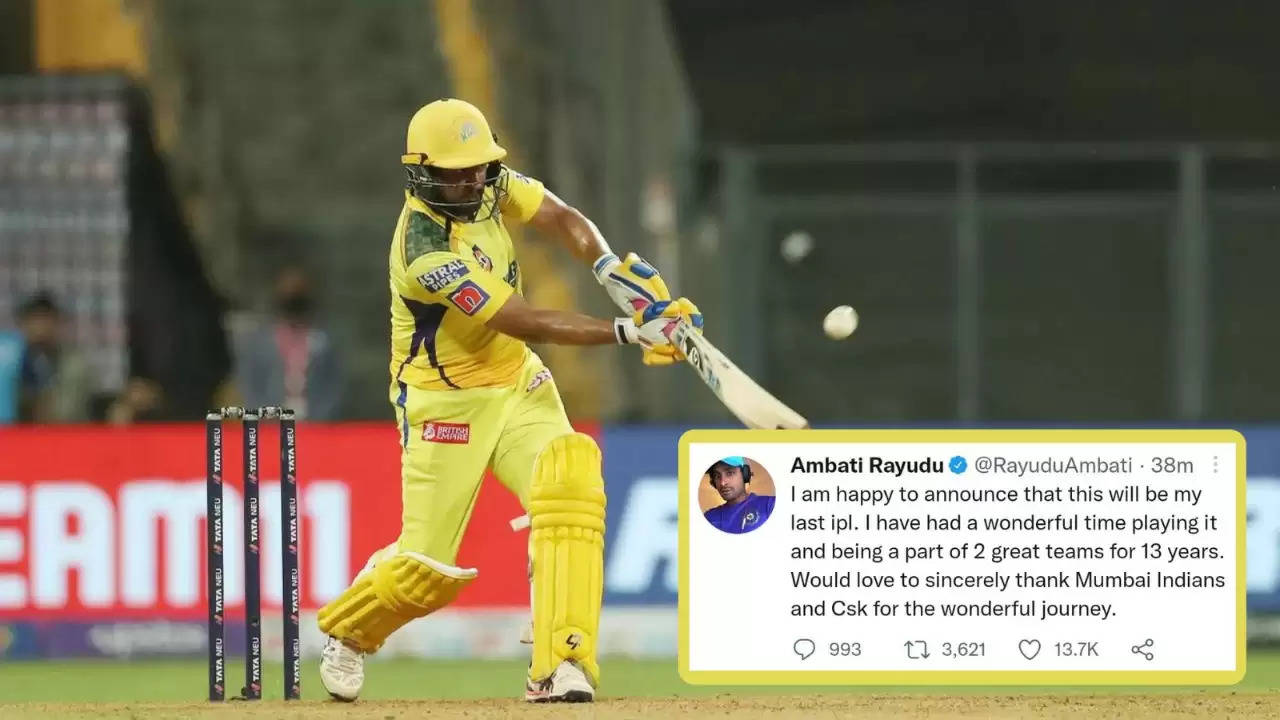 Moments after getting applauded for his contributions in IPL, Ambati Rayudu recieved flak for withdrawing his announcement tweet.

Ambati Rayudu seems to have given birth to another controversy in relation to his retirement call. Nearly three years after his call to quits and take a u-turn made headlines around the 2019 World Cup in UK, the Indian batter on Saturday (May 14) deleted a tweet which carried an announcement of bidding farewell from IPL cricket.

Rayudu got the social media buzzing on an otherwise relatively quiet afternoon with a tweet he deleted after signalling the end of his playing career in the biggest T20 league in the world, thanking his former team Mumbai Indians (MI) and latest franchise Chennai Super Kings (CSK).

"I am happy to announce that this will be my last IPL," tweeted the CSK veteran before backtracking from it. "I have had a wonderful time playing it and being part of two great teams for 13 years. Would love to sincerely thank Mumbai Indians and CSK for the wonderful journey."

Immediately after Ambati Rayudu made his tweet, congratulatory messages started to pour in from the fans for what has been a wholehearted contributor over the years in IPL cricket, with good wishes sent for the future.

However, the same fans were left puzzled after Rayudu mysteriously deleted his tweet, leading to speculations about whether the player took his initial call in disappointment of a poor IPL 2022 and whether the CSK think-tank were even made aware of his decision before went on to tweet the same?

Moments later, NDTV reported CSK chief executive officer Kasi Viswanathan confirming, "Rayudu is not retiring", which made the fans even more irritated and annoyed, with many of them asking if everything was alright within the CSK set-up.

"No no he's not retiring. Maybe he wasn't happy with his performances and might have put it out. Just a psychological thing, I reckon. He'll be with us," Viswanathan said.

Guy can't even retire on his own wish in this franchise , sad 😔 https://t.co/C4c15bzHRX

Rayudu seems like the most confused guy out there.

Didn't get picked for WC, trolled BCCI and regretted it, announced retirement.

So Rayudu just did a Shahid Afridi. And he broke Afridi's record while doing that.

So much confusion being created just like how RR did a few days ago!If the account was hacked then it's fine but if they did it genuinely it is a huge disappointment n carelessness on the part of Rayudu n CSK magt.He can still play for a few years n provide solidarity in mid ord!

More in the news for off-field controversies this year than the on-field performances, the defending champions previously had a shocking captaincy switch back to MS Dhoni, only eight games after premier allrounder Ravindra Jadeja had been appointed skipper for the season.

For what now appears a clear case of knee-jerk reaction over a disappointing season from Ambati Rayudu, the cricketer not only attracted flak for his tweet but also drew attention towards the CSK camp.