Axar Patel played a match-winning knock for India in the second ODI against the West Indies.
By Kashish Chadha Mon, 25 Jul 2022 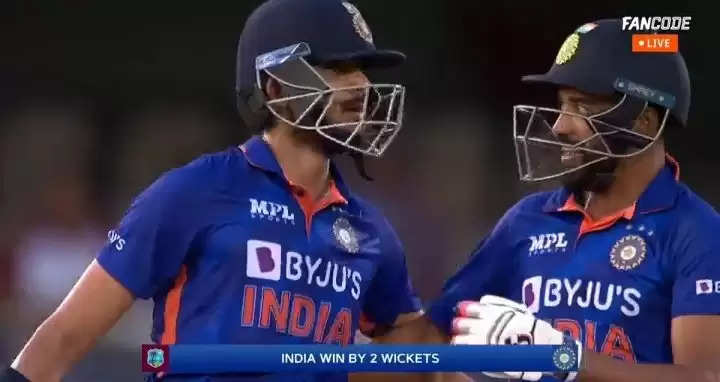 Axar Patel proved to be the hero for India, scoring an unbeaten 64 off 35 balls.

Axar Patel proved to be the unlikely hero with the bat in India's victory in another thriller against the West Indies in the second ODI in Trinidad on Sunday (July 24).

India's backup spin bowling allrounder produced a fantastic half-century to win a cliffhanger for the tourists and seal the three-match series with an unassailable 2-0 lead.

Walking into bat with India 205/5 and the win still another 107 runs away, Patel smashed the West Indies attack for his career-best 64 not out off 35 deliveries, featuring 3 fours and 5 sixes.

Axar Patel took the game to the last over and finished off the proceedings with a maximum straight down the ground, making it a memory that would stay etched in the fans' conscience for a long time.

Axar Patel six that won the series for India

With six runs needed off the last three balls facing West Indies' medium-fast bowler Kyle Mayers, Axar Patel got a wide full-toss which he duly dispatched over the long-on boundary at the Queen's Park Oval in Port of Spain.

The moment the left-hander hit the ball he knew it is going all the way as he soaked in the moment of glory with lower-order batter Mohammed Siraj, who gave his partner a hug following India's two-wicket win.

Watch: 'Lord' Shardul Thakur bowls Nicholas Pooran around his legs at crucial point in the game

The entire Indian team dressing room was seen jubilant in the moment, relishing the win thanks largely due to a valiant late-order act from their spin allrounder at No.7.

The winning six by Axar Parel when India need 6 from 3 balls, a fantastic finish. pic.twitter.com/miSwDLeQVO

It was a perfect finish, but could well prove to be a perfect restart to Axar Patel's limited-overs career for India. With his match-winning effort, the cricketer certainly leapfrogged other potential candidates for his role as backup to incumbent Ravindra Jadeja and earned himself more breathing space.

He shined with the ball in the first half, delivering a spell of 1 for 40 off his 9 overs to help restrict the fighting West Indies batting line-up to 311/6. And back that up with a dominating performance with the bat in hand, playing an incredible knock with a strike-rate of 182.86.