Fans were left bemused by the Dinesh Karthik run-out against Bangladesh in the T20 World Cup 2022 game.
By Kashish Chadha Wed, 2 Nov 2022 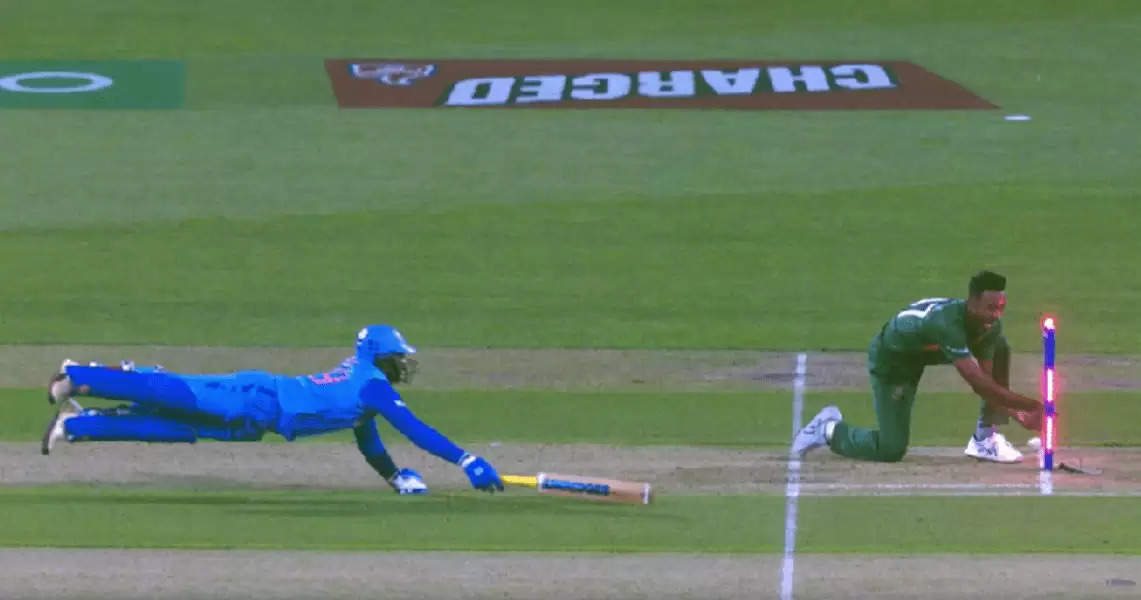 Dinesh Karthik was involved in a debatable run-out during India's Super 12s encounter against Bangladesh at the T20 World Cup 2022 in Adelaide on Wednesday (November 2).

The experienced wicketkeeper-batter was ruled out even as doubts emerged whether seamer Shoriful Islam dislodged the wickets with the ball in his hand.

At the point of trying to inflict the run-out, Shoriful seems to have lost control of the ball and gotten only his hands onto the stumps while Karthik was seen making a dive to try and resurrect his ground at the other end.

As Virat Kohli dispatched a full ball from the pacer straight to the cover fielder Shakib Al Hasan, Dinesh Karthik was forced to quickly recover his position at the non-striker's, which looked like a hopeless cause since he had over-ran his initial attempt to get to Kohli's end.

But the keeper could've still survived had the television umpire gone ahead with the semblance of doubt that emerged via the replay and given it in the batter's favour, especially as it seemed that Shoriful had only taken the bails off the stumps with his hands without the ball held in his hands.

The incident happened on the final ball of the 17th over. Eager to get a single and the in-form Kohli on strike for the start of the next over, Dinesh Karthik began running even as his partner's attempted big shot went straight to the fielder.

Placed in covers, Shakib saw Karthik overrun at his end and make a simple throw to Shoriful, expecting him to dismiss the non-striker easily.

The run-out can be seen here

However, the Bangladesh seamer almost messed up the run-out opportunity and inflicted a questionable dismissal, wherein his hands seemed to have lost grasp of the ball in play before he hit the stumps.

While the rebound off Shoriful's hands did hit the stumps, the ball was never quite in control of the seamer. But the appeal made by the fielding side was upheld and Karthik was declared run-out having just kicked on his innings, and placed 7 off 5 balls.

This is how fans reacted to it:

Bad luck for Dinesh Karthik today, He was in good touch.#DineshKarthik

That run out decision was given faster than light 🤦🏻‍♂️#DineshKarthik

Wasn't convinced about DK's dismissal. To me it looked like that hands hit the stumps and broke the bails. When the ball touched the stumps, don't think the bails were dislodged.

Absolutely... Terrible call. Atleast ump should have looked it from front on angle and see if bails dislodged or not when ball hit.
From side on definitely lights came on when his hand hit the stumpshttps://t.co/QzAcv4XYFb

Dinesh Karthik would've been livid with the run-out as it denied him a great opportunity to enchash at the death against Bangladesh. The keeper's struggles with the bat continued.