Ashwin: ‘DK the finisher is growing like fine wine’

Dinesh Karthik reflected on his comeback to the Indian team and spoke on his short term goals in a candid chat with Ravichandran Ashwin after India’s 68-run in the first T20I against West Indies on Friday, July 29.
By CX Staff Writer Sat, 30 Jul 2022 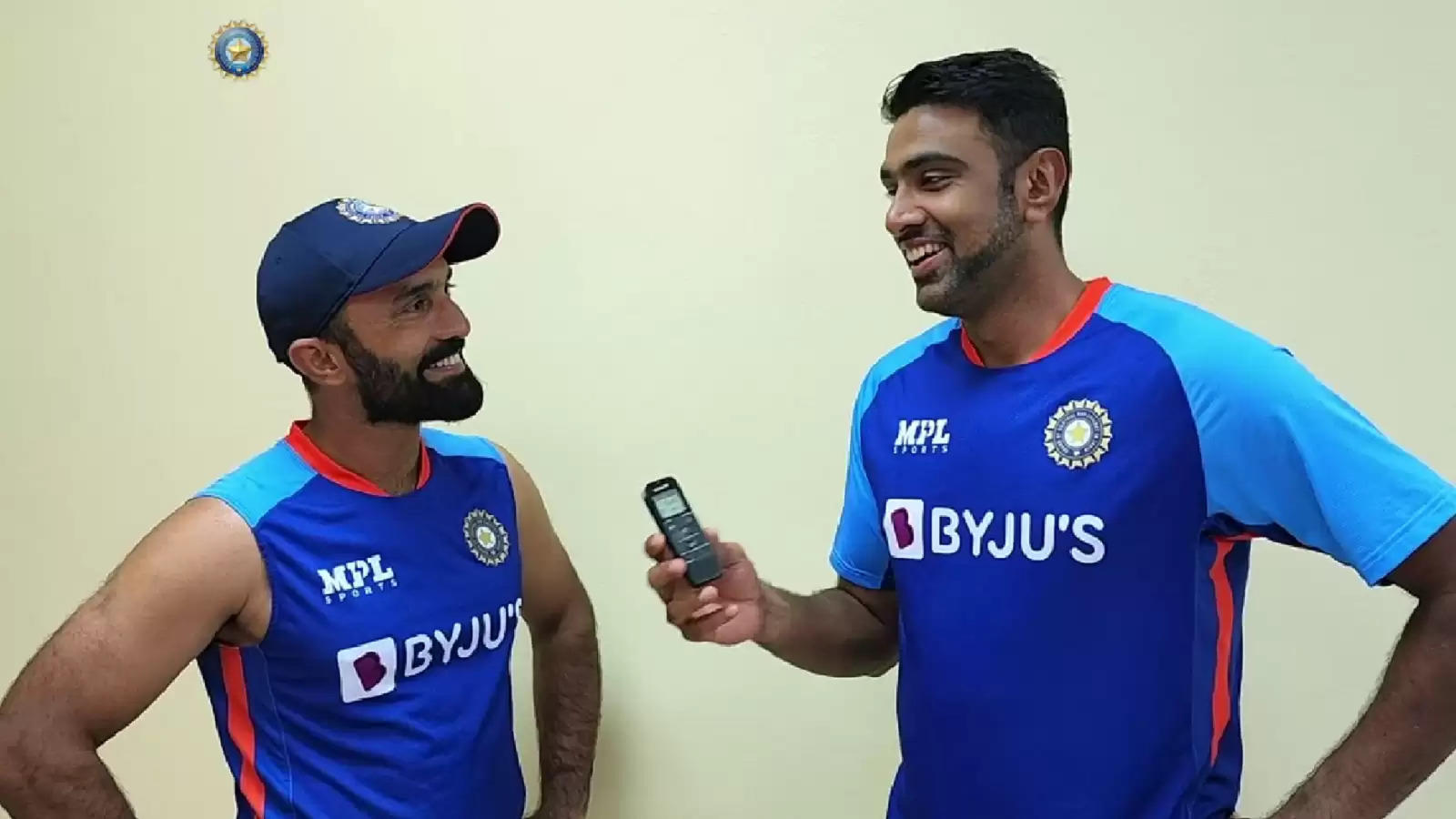 Karthik smashed an unbeaten 41 off 19 in the first T20I against West Indies.

India secured a comprehensive 68-run win in the first of five T20Is against the West Indies at the Brain Lara Cricket Stadium, Tarouba, Trinidad on Friday, July 29. While Rohit Sharma (64 off 44) and spinners played their part, the game-changing performance came from Dinesh Karthik, who stroked an unbeaten 41 off 19 to help India post 190/6 after being put in to bat.

Karthik and Ravichandran Ashwin, the latter of whom dismissed Nicholas Pooran and Shimron Hetmyer in his first T20I for India since November, reflected on their time in the Indian setup while looking back at the win.

At the venue named after one of game’s greats, Ashwin was quick to point out that Karthik is the only active Indian player among the ones who were playing at the time of Lara’s retirement back in 2007.

“It was a very good game for us. We adapted really well to the conditions,” said Karthik in a video posted by bcci.tv. “Quite an interesting wicket, we batted and bowled really well.”

Ashwin, who was involved in a 52-run stand in the final four overs alongside Karthik, opened up on his batting approach.

“Yeah, I have been working on my batting. Even before the game I communicated with you as to what we’ll be doing if we bat together,” said Ashwin. “Understanding and learning on the go has started to help me a lot in terms of batting.

“It was nice overall, I didn't feel I was coming back to the team or anything like that, just genuinely felt that I was playing the game after a long time, which was a bit different. Hopefully it’ll get better as the series goes on.”

As for Karthik, the brilliance in the finisher’s role has continued for India after an outstanding IPL season with the RCB, and he looks forward to making an impact at the T20 World Cup in Australia later this year.

“You need to be quick to assess conditions while batting in the death overs,” he said. “As we saw, when Jadeja got out and you (Ashwin) came in, it was a very critical phase of the game, and that would’ve been the difference between a score of 165 and 190. We stitched a very crucial partnership and then at the back end we made sure that we hit the boundaries. But till then there was a phase when we needed to absorb pressure, which I thought we did well.

“I’m really enjoying this setup. The coach and the captain deserve credit for setting up a calm atmosphere. They are dealing with failures in the most rational way possible. At times when I didn't do well, I was treated the same way and the dressing room atmosphere has been great.

“These are the small check boxes we need to have at this stage but obviously the ultimate goal is to do well at the T20 World Cup and I’m sure both of us have a small role to play there.”

“DK, the finisher is growing like [fine] wine,” remarked Ashwin as he signed off.