Indian fan going by the name Sanyam Jaiswal was accused of anti-national act after wearing the Pakistan jersey inside the stadium.
By Kashish Chadha Wed, 31 Aug 2022 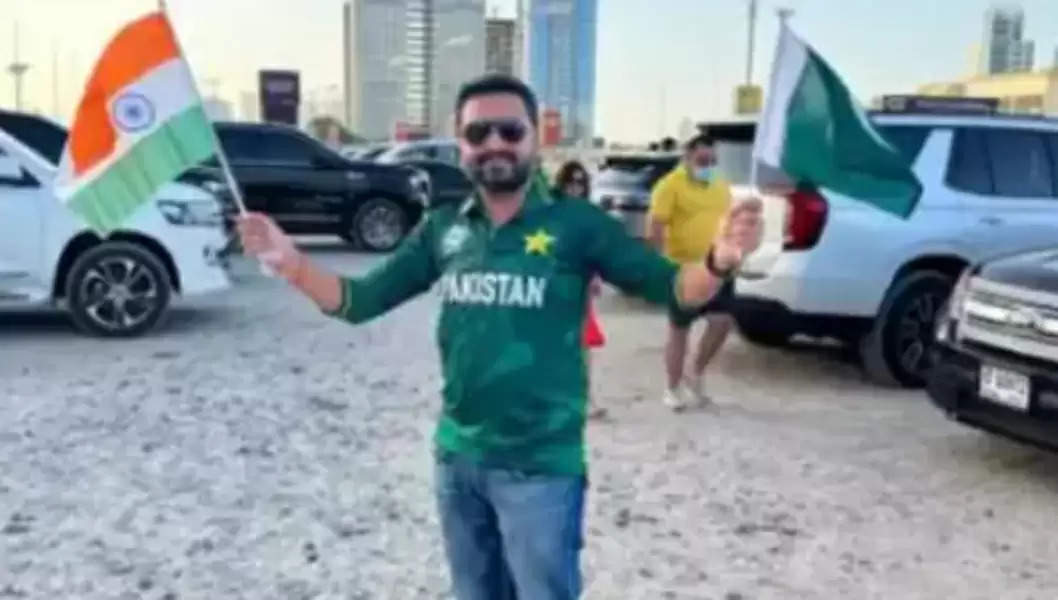 Jaiswal's family is getting threats from right-wing activists after a picture of his was misunderstood over social media.

An Indian fan named Sanyam Jaiswal received death threats back home in UP's Bareilly for a funny prank inside the Dubai stadium during the India-Pakistan clash for the Asia Cup 2022 on Sunday (August 28).

Jaiswal, who had travelled to UAE to catch the glimpse of the mouth-watering neighbours' clash, has had threats made against him after wearing the Pakistan jersey as part of a prank during the match.

A picture of him with the caption "an Indian man supporting Pakistan" went viral over social media, with people of his hometown taking offence to Jaiswal wearing the Pakistani jersey. His family started receiving threats and warnings, with some suggesting the government and police authorities in UP to file an FIR against him.

In stress over those threats, Jaiswal's family members began calling him and informing him of the reactions to his actions, also asking him to clarify his stance immediately.

Speaking to the Times of India, Sanyam Jaiswal clarified why he ended up wearing the Pakistan jersey inside the stadium in Dubai despite being an Indian fan. Jaiswal said he was on the lookout for an Indian jersey once he entered the ground but they were all sold out. He then decided to buy one Pakistan jersey and play a prank on the Pakistani section of the jam-packed crowd.

"Like many others, I am, of course, a supporter of the Indian cricket team," Jaiswal stood firm. "I had planned to watch the match from the stadium with my friend, who came to Dubai all the way from the US. After I failed to get an Indian jersey at the store outside the stadium, I picked up a Pakistan jersey, which was available."

"I thought I would tease Pakistani fans by shouting 'Hindustan zindabad' while wearing their national colours. I didn't know such a harmless thing would result in misery for me," he added.

"It was all innocent. Though I was wearing the Pakistan jersey, I also had the Indian flag in my hand. My father is a heart patient and he says he will get an attack from all the tension. Everyone is calling me a traitor."

A family member of Jaiswal reacted to the incident with the condition to anonymity and said: "Sanyam even has a video in which a Pakistani fan is asking him why he's supporting India. What does he need to do to prove that he is not anti-India? This is so sad."

Mindful of the extreme nature of the reactions that have come in, Jaiswal feels dismayed and let down by his own countrymen for misunderstanding where he came from and giving him and his family nightmares after threatening to file an FIR.

"I feel so let down. I had shared the pictures with a few friends. I don’t know who shared it publicly. I am under immense tension while my father, wife, and children are restless at home," he said.

"I am really disappointed with the people who are sharing my images on social media without my consent and without knowing my side of the story."

The calls for FIR against the travelling Indian fan were first made by a right-wing activist Himanshu Patel, who tweeted a picture of Jaiswal, cropping the Indian flag he held in his hand. Jaiswal's father, aged 72, said he is deeply "hurt" over question marks against his son and the family, with some calling Sanyam "anti-national".

No FIR can be filed against Jaiswal since the incident took place in Dubai in UAE.