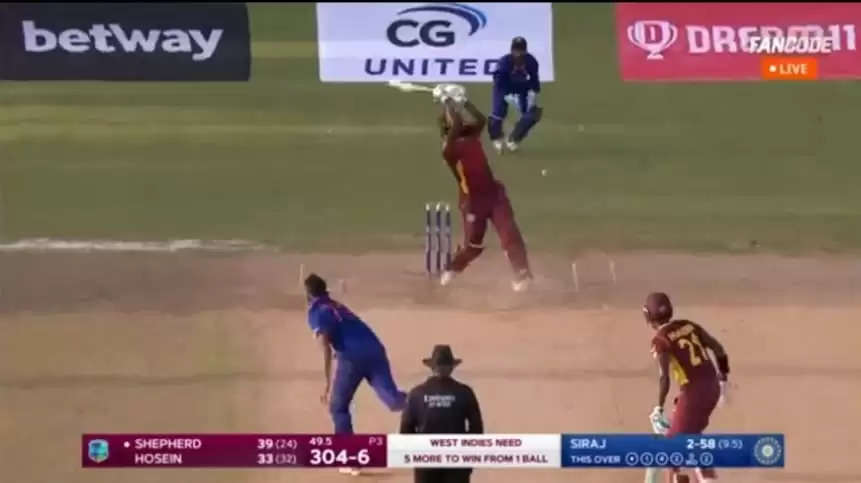 Mohammed Siraj delivered the sucker punch for India as they clinched the high-scoring thriller at Port of Spain.

Mohammed Siraj proved to be a death-overs hero as India clinched a high-scoring thriller against West Indies in the first ODI of the three-match series in Trinidad on Friday (July 22).

Defending 5 runs off the final ball, Siraj nailed a yorker past lower-order batter Romario Shepherd and gave away only a single off a bye that was saved through a valiant dive by wicketkeeper Sanju Samson.

Chasing a target of 309, a spirited West Indies side went as deep as 304/6 from 49.5 overs in the second half, needing one big hit to secure an unlikely victory against the Indians.

But they were denied a win by Mohammed Siraj's perfect yorker that evaded Shepherd's moving willow, sneaked through between his legs and was collected well by Samson behind the stumps.

The Siraj-Samson duo kept the damage down to just 1 run, which meant a three-run victory for the tourists.

Mohammed Siraj saves the day for India with timely yorker

Not known for his death-bowling expertise, Mohammed Siraj came up with a yorker past Shepherd, who opened up his front leg and attempted a swipe towards the on-side. But the delivery from Siraj was too quick and sneaked through the gap between his legs, before getting saved by a diving Samson.

Samson ensured West Indies didn't get extras off a bye down the leg side and India kept the damage down to only a solitary run when West Indies required four runs more to overhaul the tourists.

Watch: Flying Sanju Samson's brilliant save to prevent four in high-pressure final over vs West Indies

In the heat of the pressure, Siraj-Samson kept their calm and produced some outstanding piece of cricket to ensure victory for the Indians when West Indies were only one big hit short of ruining their plans.

The moment Samson grabbed hold of the ball, the usually unflustered character couldn't control his emotions and ran up to Siraj to express his sense of jubilation with a lovely hug, while the rest of the Indian fielders also circled around them to celebrate the win.

When the chips were down, Mohammed Siraj came up with one of his better death-bowling exhibitions and finished with figures of 2 for 58 off his 10 overs.