Bengaluru, Jan 19 (PTI) Rohit Sharma and Virat Kohli paced a tricky run chase with sublime knocks as India wrapped the series 2-1 with a comfortable seven-wicket victory in the decisive third ODI against Australia, here on Sunday. Rohit (119 off 128) was due for a big score in the series and he delivered in the […]
By PTI Sun, 19 Jan 2020 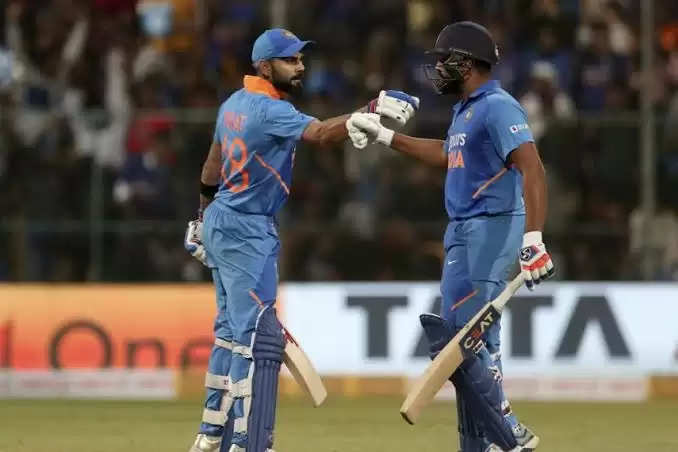 Bengaluru, Jan 19 (PTI) Rohit Sharma and Virat Kohli paced a tricky run chase with sublime knocks as India wrapped the series 2-1 with a comfortable seven-wicket victory in the decisive third ODI against Australia, here on Sunday.
Rohit (119 off 128) was due for a big score in the series and he delivered in the all-important game for his 29th ODI hundred.

India had a point to prove against Australia, having lost the home series to them in March last year. The 10-wicket drubbing in Mumbai did not deter India as they posted emphatic victories in Rajkot and here at the Chinnaswamy Stadium.

Following Rohit’s fall, Kohli (89 off 91) anchored the chase as India cantered to a the win in 47.3 overs. Shreyas Iyer remained unbeaten on 44 off 35 balls.

The 137-run stand between Rohit and Kohli effectively won the game for India, who overhauled the 287-run target with 15 balls to spare.

Opener Shikhar Dhawan did not come out to bat due to an injured shoulder and he did not need to, considering the way his team got the job done.

Rahul, who batted at three in Mumbai and five in Rajkot, came out to open alongside Rohit. He began with a beautiful punch on the off side but lasted only 27 balls after Australia took a successful LBW review off Ashton Agar.

Rohit scored bulk of runs in their 69-run opening stand.

Australia offered Rohit plenty of loose balls to free his arms as he ended up smashing six sixes and eight fours. His best hit came off Pat Cummins as he flicked the pacer for a spectacular six over midwicket.

Rohit also became the third fastest to 9000 ODI runs while Kohli became the fastest batsman to score 5000 runs as skipper.

Smith (131 off 132) rose to the occasion but did not get much support from the other batsmen. Shami was brilliant in the death overs striking thrice. The other substantial knock in the Australian innings came from Marnus Labuschagne (54 off 64).

Australia won the toss for the third time in a row but unlike the last game in Rajkot, opted to bat.

Kohli decided to go in with the winning combination of the last game even though Rishabh Pant was available for selection.

It meant Rahul was the specialist wicketkeeper batsman for the second successive game.

Australia lost their in-form openers David Warner (3) and Aaron Finch (19) — rather early. Targeting the off-stump channel initially, Shami induced an outside edge from Warner’s bat with an away going delivery.

Smith was responsible for Finch’s run out as he called his skipper for a run before changing his mind. Finch, who is usually calm and composed, was furious and used cuss words while walking back to the dressing room.

By the first powerplay, Australia reached 56 for two with Smith and Labuschagne in the middle. It was once again evident why they love batting together.

They both had stitched a 96-run stand on Friday and batted in a similar fashion, rotating the strike regularly and picking up an odd boundary enroute to their 127-run partnership.

Labuschagne, who made 46 in his first ODI innings during the Rajkot game but got out at the wrong time, went on to score a half-century on this occasion.

Alongside Smith, he looked set for a big knock until a diving Kohli sent him back with a stunning catch at cover.

Jadeja, who got the ball to turn on a dry pitch, got his second wicket of the over when he had Mitchell Starc, who was sent ahead of Alex Carey, caught at deep midwicket.

Smith was going along nicely at the other end but the team needed another substantial contribution to go past 300. He shared 58 runs for the fifth wicket with Carey (35) but the latter departed when the innings needed a move on.

Having missed his century by two runs on Friday, Smith reached the milestone with a single towards third man. It was his first ODI hundred in three years.