Rohit Sharma was at the receiving end of a questionale television umpire call despite an obvious technological glitch.
By Kashish Chadha Mon, 9 May 2022 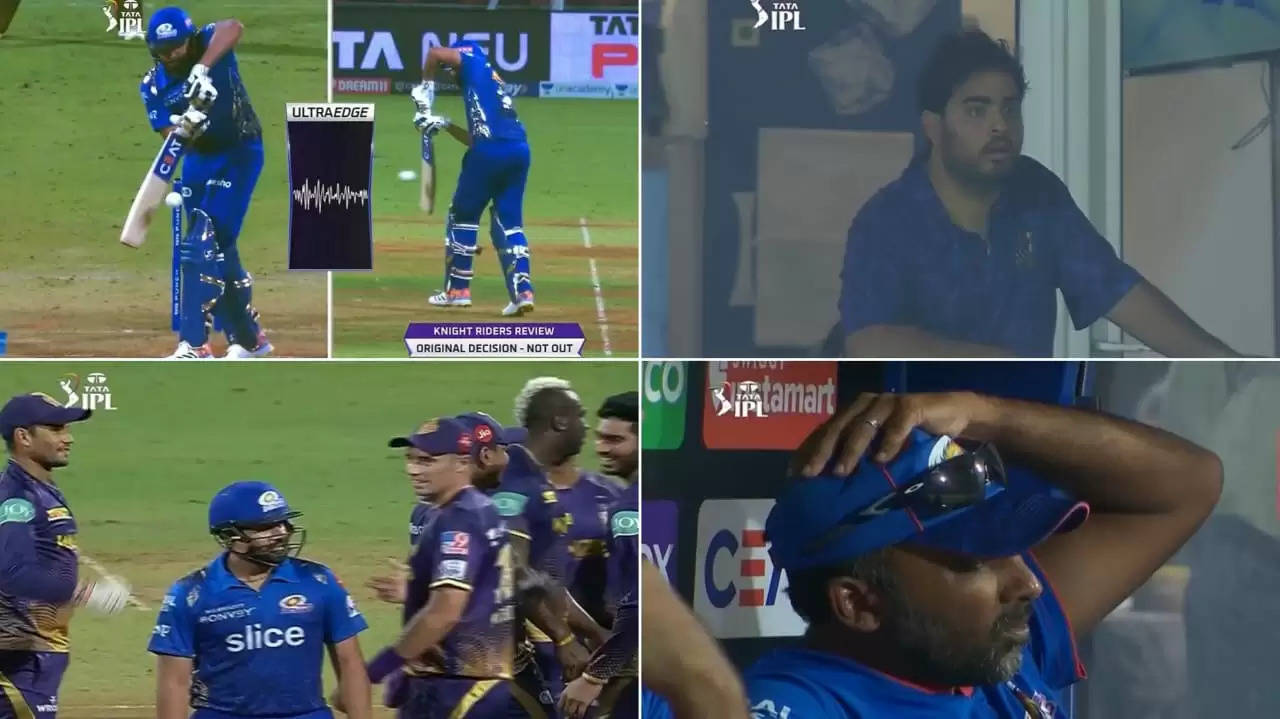 Given not out initially, Rohit Sharma had a debatable reversal of the on-field call in an IPL 2022 game in Mumbai.

Mumbai Indians (MI) skipper Rohit Sharma was at the receiving end of a technical glitch on the DRS process in an IPL 2022 game on Monday (May 9) night.

The ultraedge displayed a big murmur even as the ball wasn't even in contact of the right-hander's willow after a caught-behind appeal from Kolkata Knight Riders (KKR) at the DY Patil Stadium in Mumbai.

Fans were left shocked by the error in play as the DRS replay saw the ultraedge display a big spike well before the ball even contacted the right-hander's willow while he shaped up to flick the ball through the on-side.

The incident happened on the last ball of the very first over in MI's run-chase. Shaping to play an incoming ball from KKR seamer Tim Southee, Rohit Sharma seems to have nicked the ball to the keeper Sheldon Jackson, who dived to his right and took a low catch.

The on-field umpire, however, wasn't convinced about the inside edge and stood there unmoved, leading KKR to opt for the review where the whole drama unfolded.

Rohit Sharma given out controversially; fans react in displeasure

In the review process, the television officially first checked the ultraedge to verify whether Rohit Sharma got the edge or not. The ultraedge showcased a huge murmur and the decision looked like a straightforward conclusion.

But a close look at the whole process was telling of an obvious technical glitch, as the murmur came on screen well before the ball hit the right-hander's willow and stayed that way when the ball went closer to the bat, leading to massive doubts.

The television umpire, though, went by the second image, where the murmur moved even as the ball went past the willow, perhaps not considering the initial image where the ultraedge experienced a spike despite zero connection.

The decision left Rohit Sharma furious, and triggered heavy debates on social media about the final decision, with fans wondering could IPL do better with DRS reincorporating the hot spot technology into its decision-making process for the league.

It's a high time to bring back HOTSPOT to double check with Ultra edge. #RohitSharma𓃵 #MIvsKKR

It's a high time to bring back HOTSPOT to double check with Ultra edge. #RohitSharma𓃵 #MIvsKKR

Dear @BCCI @IPL Please get some good pairs of umpire who can hear and see properly! This type of bad umpiring it's just wasting the hardwork and dedication of all the players this stuff will happen someday in IPL final or the last ball of a deciding match. #IPL2022 #RohitSharma pic.twitter.com/jrU12xW3Ni

How can the third umpire not see what we saw? Rohit was NOT OUT #MIvsKKR pic.twitter.com/UbbUH2BVcc

When the worlds most cash rich cricket league can't afford a hotspot technology.

Forget about on field umpires third empires are being the worst this season.

Why doesn't IPL use the hotspot technology? Rohit Sharma was clearly not out.

Interestingly, there was a huge element of doubt involved in the take from Jackson as well, with some part of the ball visibly contacting the turf while also being in his right-hand glove. The third umpire, however, didn't even verify the catch from Jackson and kept his focus entirely on whether  Rohit had nicked the ball or not.