Virat Kohli — When will RCB address the elephant in the room?

RCB have made wholehearted investment in Virat Kohli the brand. But have they got the desired cricketing returns for the same?
By Kashish Chadha Sat, 14 May 2022 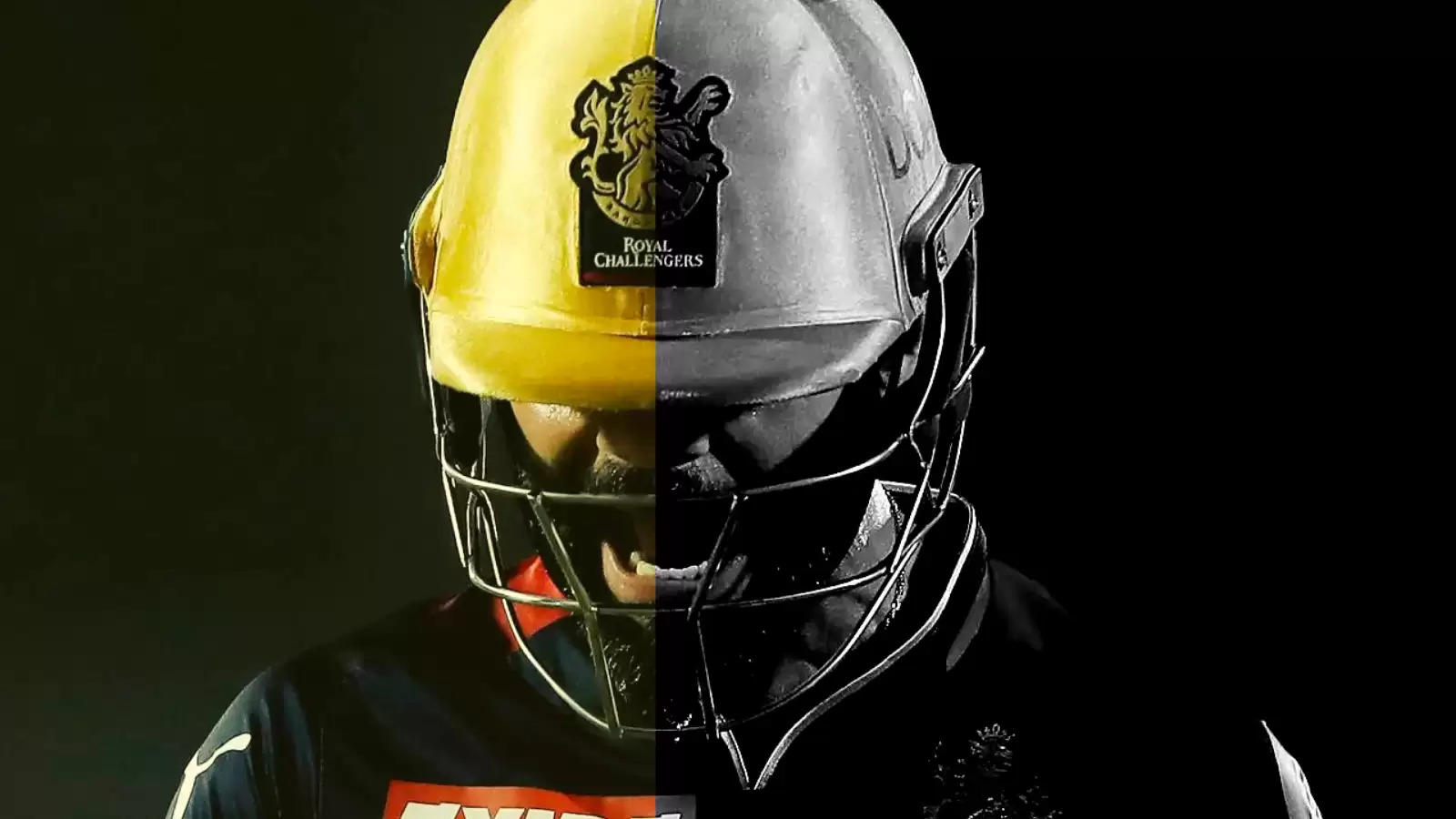 Yet, for an argument in favour of the reality of a finance-driven approach, it can't be ignored that RCB's finance comes out of cricketing decisions, aimed to maximise their profits through a certain standard of performance on the field.

RCB don't just spend their money at the auction table, like all other franchises, they look to wisely invest in individual strength that would take care of their win-loss ratio, which would then reflect positively on the profit and loss statement.

Contrary to perceptions, it can't work the other way around. That is precisely why RCB may have threatened to reach the numero uno spot but have never built a dynasty there. The presence of big names may be the crux of interest for the sponsors to invest in, the roots of that investment lie beneath the name, in the performances of the player.

You've seen the title. You know where we're heading with this. Yes, the time has come for RCB to ask whether the investment in Virat Kohli, from a young U-19 player to an established global superstar now, has really given way to the desired cricketing fruits for them? Or the returns have mainly been financial?

Over the years, RCB have moved past many renowned coaches, and tried and rejected multiple cricketers, but has the time come for them to address the elephant in the room without an emotional or financial bias?

Kohli averaged 42.36 in 2020 after a pandemic break but his strike rate of 121.35 meant the longer he stayed at the crease, the worse off RCB were at any point of their innings. Again, this is not a hypothesis, but a fact backed by numbers. In a season where the rest of the RCB batters, including their tailenders, scored 7.465 runs per over, Kohli went at 7.281.

The idea of analysing Kohli's net on-field contributions with a comparative study against what RCB conceded and what the rest of the RCB batters scored, on a year-by-year basis, is a good one. It carries context and weightage, for it shows whether Kohli was enabling his team's progress or halting it back every over he batted.

Below is a comparison of Kohli's per over rate of scoring as opposed to the scoring rate at which the rest of the RCB batters operated in a particular year. In only two seasons - 2010 and 2013 - out of fifteen, has Kohli's strike rate been better than his teammates. Even in 2016, considered his best year, the rest of RCB batters swum marginally above and allowed him to bat deep into innings for those four hundreds.

In RCB's context, it essentially means while the rest of their batters have allowed the team to cover for some of their longstanding bowling problems, Kohli hasn't managed to do that. He has either plagued a run-chase or held his team back from achieving their desired score. Below is a picture containing RCB's economy rates as a bowling unit for each of the IPL seasons and in only four of those - 2010, 2013, 2016 and 2018 - has Kohli's RPO been better than his team's average per day expenditure with the ball. 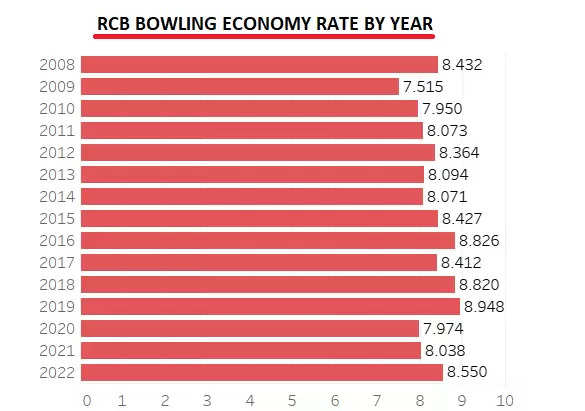 As a batter, irrespective of the format, each of your moves is expected to be aligned with the team structure. In T20, if you're a batting heavy team, a batter can't operate too far or too long below the sum expense of your bowling unit, as that would mean he is not doing tactical justice to the team with his presence and is denying it crucial runs that may help meet a similar opposition eye-to-eye. Kohli's presence has been the most anti-RCB thing in a predominantly batting-heavy RCB side.

It's no surprise that they've been a team on the rise ever since RCB found a greater balance of resources and strengthened their bowling. They've made the last two playoffs and stand one extra win shy of another top 4 berth in IPL 2022. The team went through successive league-stage finishes in three previous years. That's cricket. No financial handling of affairs was going to win RCB a title in those three seasons. Even in that famous 2016 final, they lost to a bowling-heavy side.

The encouraging returns of investment in healthier bowling resources bring about a lesson for RCB: investment in cricketing strength and not the financial muscle that the player's name brings to their table.

By now, the RCB ownership group may have invested over 200 crores worth of money in Kohli. The financial returns of that investment may be running on surplus, for Kohli is still an unparalleled brand. But do the cricketing returns suffice? With only four good seasons worth of batting, Kohli has been a net loss investment for the RCB on the field. So when are they addressing the elephant in the room?

When it comes to our greats, as Indians, we tend to run high on emotions. These emotions are of financial value to the franchises, who get a share of IPL's high-prized broadcasting deals, which are dictated by the rising number of viewers and sponsors available to fill the coffers.

This writer ran a short poll recently, asking RCB's passionate fanbase which player they would love to have replaced from their three pre-season retention picks with Yuzvendra Chahal, an IPL great, who often singlehandedly dictated RCB's bowling fortunes and now plays for Rajasthan Royals (RR). From close to 120 votes worth of voting, still a healthy size, 61.2% thought not Kohli but pacer Mohammed Siraj was dispensable to RCB's needs.

Siraj may have struggled this year, but in two years previously, bowling mostly on spin-friendly decks in UAE, he emerged as one of RCB's biggest positives. Siraj took his 22 wickets combined from IPL 2020 and IPL 2021 with an impressive average of 26.77 while going for a respectable 7.44 runs an over.

Forget Siraj, some even voted against Glenn Maxwell, who blasted a whopping 513 runs from his 14 innings in IPL 2021 with a strike rate of 144.10 on neutral surfaces and played a huge role in his team's playoffs finish.

As fans when we give birth to such an emotionally driven cricketing discourse, we play an indirect part in drowning the quality of decisions that our favourite teams make and the even quality of coverage we receive from the broadcasters.

'BASRA' has been revived on the IPL commentary feed this year, considered a dinosaur of the past about 4 years back, but it is one of the things that a bunch of commentators used recently to provide glitter to some of Virat Kohli's mediocre returns for RCB. Cut past the BASRA, and in only four of those seasons since 2013, Kohli has averaged over 30 while also carrying a strike rate that is comfortably above 130.

These commentators know what sells with the masses and are quick to peddle the narrative around that. The narrative right now in relation to Kohli's struggles is that it's a form issue. And that the great batter has been "unlucky" to have found ways to get out, standing only a couple of knocks shy of regaining his Midas touch.

When, in reality, Kohli's struggles are a byproduct of issues around skill, not form, for he can't be out of it for three successive IPL seasons. And this is most relevant when it comes to spin. He has a strike rate of 104.73 over 401 balls worth of batting against it since the start of IPL 2020.

Kohli's methods to counter-spin have gone outdated. While his backfoot game remains strong, his front foot handling of spin is as risky as ever. He plants that foot without a proper stride to the ball and goes at it with hard hands. This is why his miscued flick against Jagadeeshan Suchith flew straight to the short mid-wicket fielder - a dismissal that commentators said was about bad luck.

That day, SRH introduced spin straightaway to counter Kohli and used more of it, a general theme that has caught up with the rest of the teams, too, making it difficult for the batter to ever get going.

Since IPL 2020, Kohli has a first 15-balls strike rate of only 114.5, which falls to 113.1 when he reached the 30th ball at the crease on average. That's one of the RCB batters taking out 1/4th of deliveries available to his team with a horrible runs-per-ball count.

RCB still retained Kohli with a huge sum of 15 crores, 1/6th of their entire purse available for the mega auction, an amount they may have used to plug some holes within their developing unit and make it more robust to strengthen their claim for the first IPL trophy, which should be RCB's ultimate aim. At some point, even their most passionate fans will run out of hope and inclination with the side if the team's underlining motive would be to follow the path of financial richness, irrespective of the name involved, for they're moved by on-field affluence, not the cash in the bank.