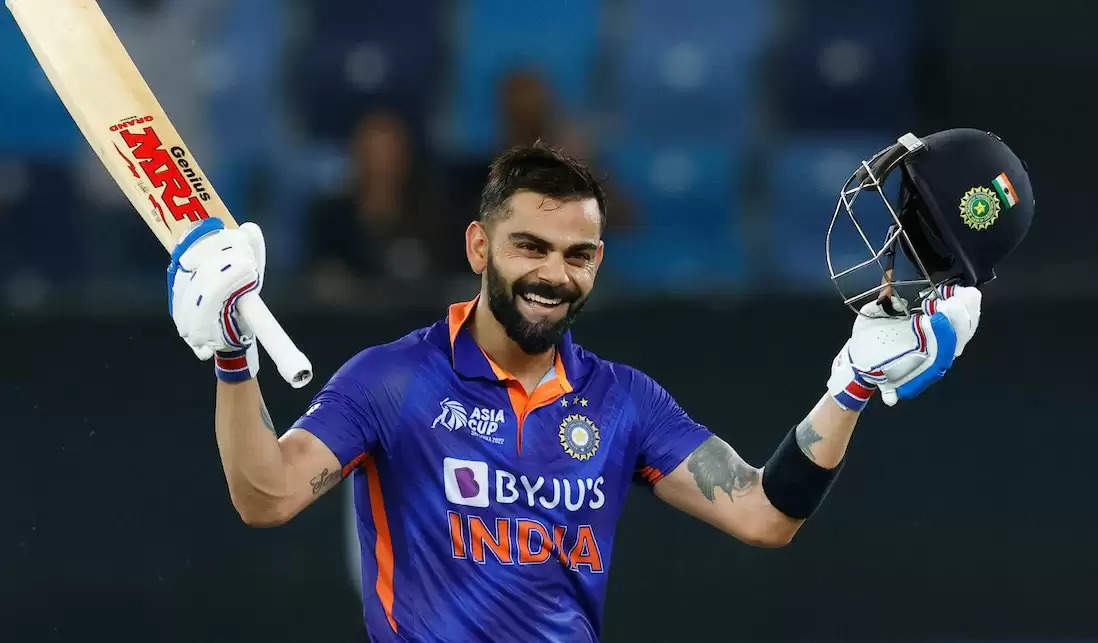 Virat Kohli smashed his way to an unbeaten 122 in India's final game of the Asia Cup 2022.

The long wait for Virat Kohli's No.71 was over on Thursday (September 8) night as he finally broke the barrier after nearly three years and recorded an international hundred for India. Kohli smashed a spectacular ton in India's final Asia Cup 2022 encounter against Afghanistan in Dubai.

The Middle East proved to be the lucky destination for India's batting great, who moved around the world over the past 34 months in the hope to secure the three-figure mark but continued to falter across formats. Before this, Kohli's most recent ton came way back in November 2019 in the first-innings of the D/N Test against Bangladesh.

In this timeframe, the right-hander went through an alarming dip in his returns in Test cricket, facing question marks over his frontfoot dominated technique versus pace. He also suffered a major decline in his spin-handling abilities in T20Is, carrying a strike-rate of 103.57 from 2020 in the build-up to the Asia Cup.

On the night, however, Virat Kohli overcame those issues brilliantly, countering the much-vaunted spin trio of Rashid Khan, Mohammad Nabi and Mujeeb ur Rahman on his way to a 53-ball hundred. He eventually finished with an unbeaten 122 off 61 deliveries, including 12 fours and 6 sixes.

The century against the Afghans was also Virat Kohli's maiden T20I hundred for India. India's T20 World Cup hero finally broke the jinx for himself in the shortest format of the game, quite mysteriously in what happens to be the twilight of his illustrious India career and potentially the final leg for him in T20Is.

That, however, was the last thing the cricket fraternity had at the top of their minds as they stood jubilant and delighted over Kohli's comeback ton and flooded the social media with congratulatory tweets for the former India captain.

It has been a wonderful knock @imVkohli. So good to see him in such good form.
Well played 👏#INDvsAFG pic.twitter.com/mYV3zEmPLs

It has been a wonderful knock @imVkohli. So good to see him in such good form.
Well played 👏#INDvsAFG pic.twitter.com/mYV3zEmPLs

It was an amazing knock @imVkohli 😍 Congratulations for scoring Century No. 71 🤗 Well played 👏🏻 pic.twitter.com/c9wSKI2dZp

The great is back @imVkohli

Maiden T20 century , so happy for you @imVkohli You totally deserved it🔥 Immense respect for such a brilliant innings #INDvAFG pic.twitter.com/H1EVC1N86A

No Words to describe the emotions. All hearts. This is Virat Kohli 2.0 and he is ready to take the world by storm. @imVkohli 👑🦁♾ pic.twitter.com/cYXWKwn4yT

The Agonising wait is over.
Congratulations @imVkohli on the 71st International 💯
This #AsiaCup2022 it looked like coming... and boy... what an elegant knock!! #nolookingback pic.twitter.com/rtcjgyKnHo

Century after 1021 days! His first in T20Is. What a day for Virat Kohli and Indian cricket! More centuries to come. @imVkohli #AsiaCup2022 pic.twitter.com/WZWglIZVbu

The 71st is finally here, long wait but worth it. What composed and powerful innings and statement from Virat Kohli. Maza aagaya! #INDvsAFG #asiacup2022 @imVkohli pic.twitter.com/4MQWG0zg00

With two half-centuries and a ton to his name, Virat Kohli finished as India's only real positive from the team's disappointing Asia Cup 2022 campaign. The great player top-scored for the team with 276 runs from his five innings at a tournament strike-rate of 147.59.