Fans applaud Zimbabwe's maiden ODI win Down Under against Australia

Zimbabwe clinched a three-wicket victory in the third and final one-dayer of their series against the five-time world champions.
By Kashish Chadha Sat, 3 Sep 2022 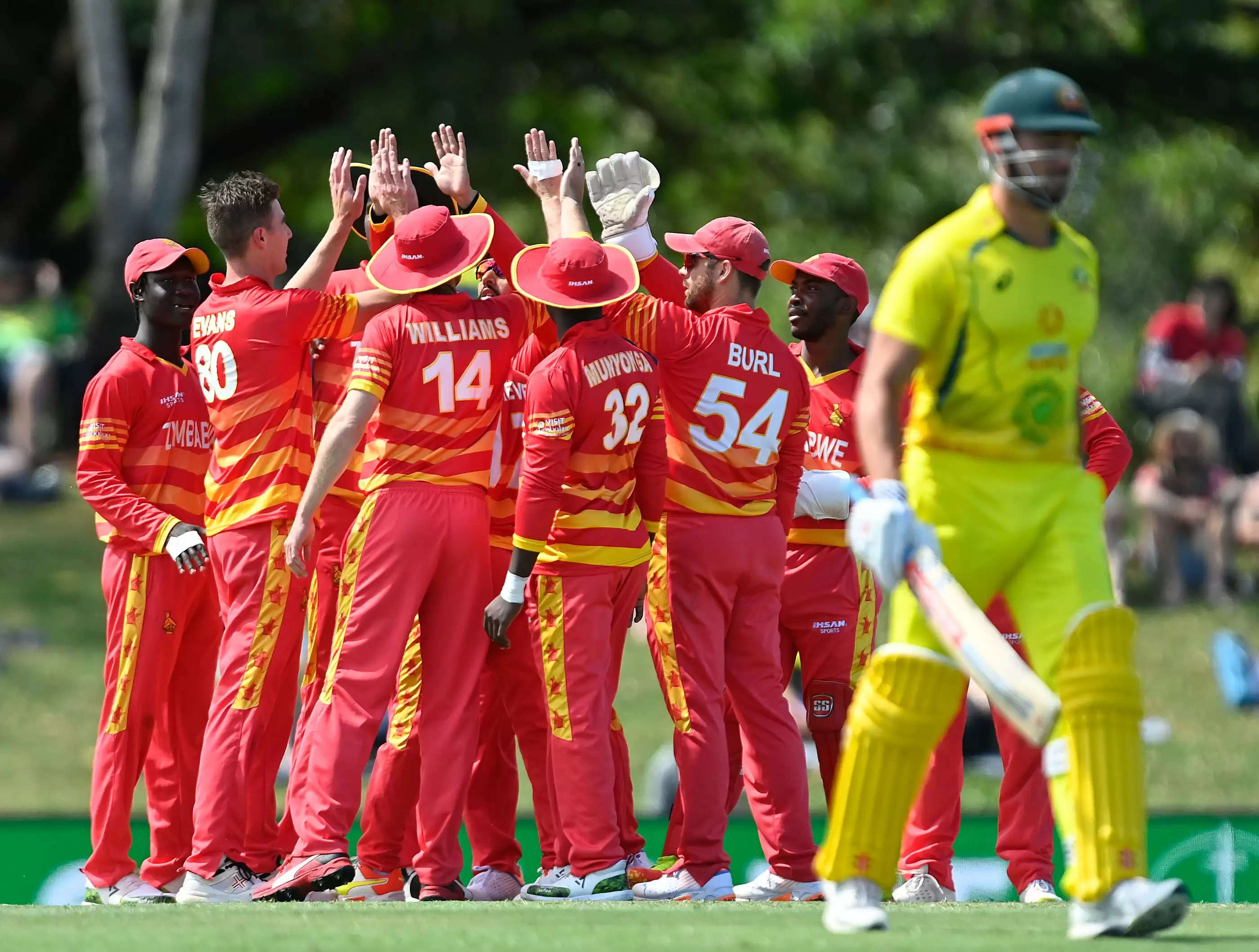 Zimbabwe produced their first win on Australian soil after a return Down Under after 18 years to face the hosts.

Zimbabwe scripted history on Saturday (September 3) afternoon in Townsville, clinching their first-ever international victory over Australia in Australia. The African rivals defeated a full-strength Australian side in the third and final ODI of their series, which marked their return to the Aussie shores for a bilateral trip after 18 years.

In a spirited effort, the Zimbabweans put their hammerings in the previous two one-dayers behind them and dismissed the Australians for a paltry 141 in just 31 overs, with wristspinner Ryan Burl being their stand-out performer and taking a five-fer (5/10) in just three overs.

The visitors had their stutters in a nervy chase, where they lost seven wickets and faced 39 overs. But a measured knock of 37 not out from skipper Regis Chakabva and opening batter Tadiwanashe Marumani's stable 35 helped them keep the dangerous opposition bowling attack at bay.

The win in Townsville was only Zimbabwe's third in ODI history against Australia over 33 matches, with the previous victories dating back to the 1983 World Cup in England and a win in Harare back in 2014 during a tri-series also featuring South Africa.

Given the magnitude of their victory, it was only imminent that fans would react to the Zimbabwean feast with high praise and appreciation of the efforts of one of cricket's most unfortunate have-nots. Flexing their vulnerable muscles and overcoming massive odds against the Aussies, Zimbabwe were showered with lavish compliments.

Here is how some of the fans reacted to their win:

Wow! Feels good when an underdog does well.
Zimbabwe beating a full strength Australian side in Australia. Not that anywhere else would have been lesser, but at home beating Australia has to be
One of the biggest upsets in history of ODI cricket. Well done Zimbabwe. #AusVsZim pic.twitter.com/PeYDBUpi65

Wow! Feels good when an underdog does well.
Zimbabwe beating a full strength Australian side in Australia. Not that anywhere else would have been lesser, but at home beating Australia has to be
One of the biggest upsets in history of ODI cricket. Well done Zimbabwe. #AusVsZim pic.twitter.com/PeYDBUpi65

13th ranked ODI team, lots of injuries, playing against a full strength Australia, in the ODI super league, they have beaten 5-time world Champions in Australia. What a day in cricket, Hats off Zimbabwe. pic.twitter.com/068OakAqLw

Historic! This is only the 4th time Zimbabwe have beaten Australia in international cricket

Ryan Burl took an incredible career-best 5 for 10 as Zimbabwe gave themselves a fantastic opportunity to register their first win in Australia by rolling out the home side for 141 in 31 overs in the third ODI. #AusvZim pic.twitter.com/eFuk8xxZ9s

Zimbabwe have now won more matches in Australia than NZ have in the last decade.

UNBELIEVABLE! Zimbabwe have registered their first win against Australia in Australia! This team has been a pure joy to watch. From beating Bangladesh, giving a serious scare to India to this, it has been a phenomenal, phenomenal performance by them.

History created! Zimbabwe wins an ODI against mighty Australia and Pakistan in their Backyards in this CWC Super League Cycle. Defeated Bangladesh at Home as well. Well Done 🇿🇼👏 #AUSvZIM

Via their Townsville triumph, Zimbabwe also earned their most prized scalp in the ongoing ICC Super League, with the win giving them 10 points in the league meant to identify direct qualifiers for the 2023 World Cup in India.