Anukul Roy made a questionable boundary save in KKR's IPL 2022 league stage encounter against RR.
By Kashish Chadha Mon, 2 May 2022 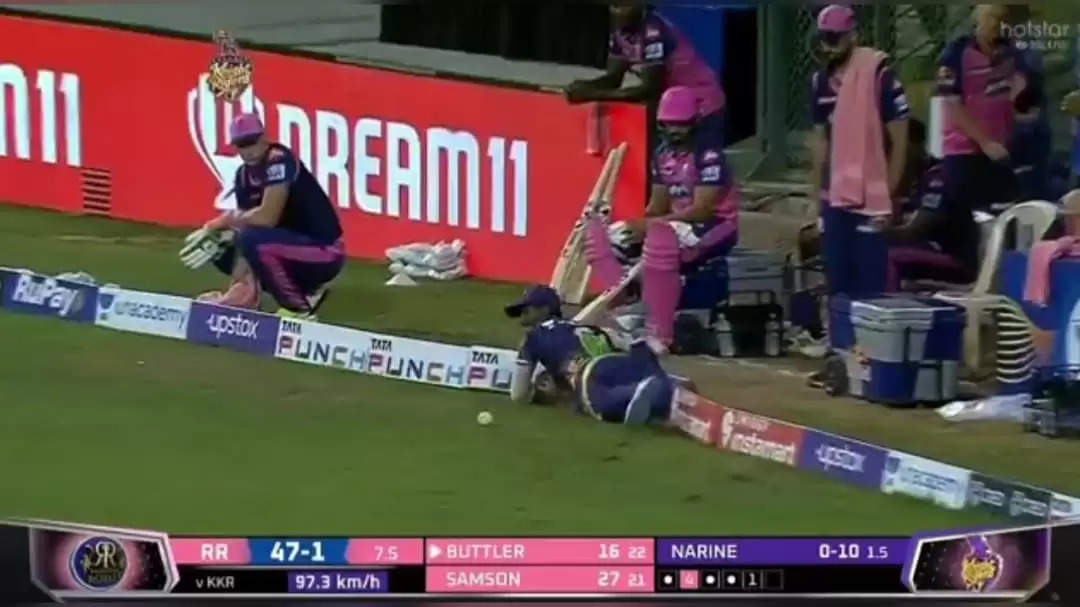 The rebound that Anukul Roy picked up off the turf at the Wankhede was peerlessly close to the rope.

Kolkata Knight Riders (KKR) left-arm spinner Anukul Roy was involved in a contentious boundary save during his team's IPL 2022 league-stage encounter on Monday (May 2) against the Rajasthan Royals (RR).

Roy evaded a doubtful save near the ropes at the fine-leg region a nudge down the leg from RR's opening batter Jos Buttler against KKR mystery spinner Sunil Narine.

The cricketer collided with the rope in his dive to save the four runs and collected the rebound from the area where the rope was placed after the collision.

The boundary cushion had taken the blow off the fielder's body and got misplaced from its original position. But the television officials failed to recognise it and upheld Anukul Roy's debatable fielding save, allowing KKR to get away with just two runs when it could easily have been a boundary.

The incident took place at the end of the eighth over in RR's first-innings at the Wankhede Stadium in Mumbai. Facing Narine, Buttler paddled the ball down the leg for what looked like a certain boundary. But square leg fielder Anukul Roy sprinted across the outfield and made a valiant effort in trying to stop the four runs.

The momentum of the dive was such that Roy thumped onto the cushion and disturbed it from its original position, while the ball ricocheted off the fielder's body and rolled onto the turf. Roy, however, resurrected himself and picked up the ball.

But this is where he faltered, as the ball was peerlessly close to the disturbed section of the cushion when the fielder took the ball off the turf.


In a rare mistake from the match officials, however, Anukul Roy's mistake went unnoticed, with the third umpire finding no contact with the ball onto the cushion when the KKR fielder picked it up.
In another debatable call made by the officials in this year's IPL, the television official found nothing suspicious about Roy's pick up and allowed KKR to get away with only two runs when RR should've gotten a boundary.
From around the web
Weekly Trending