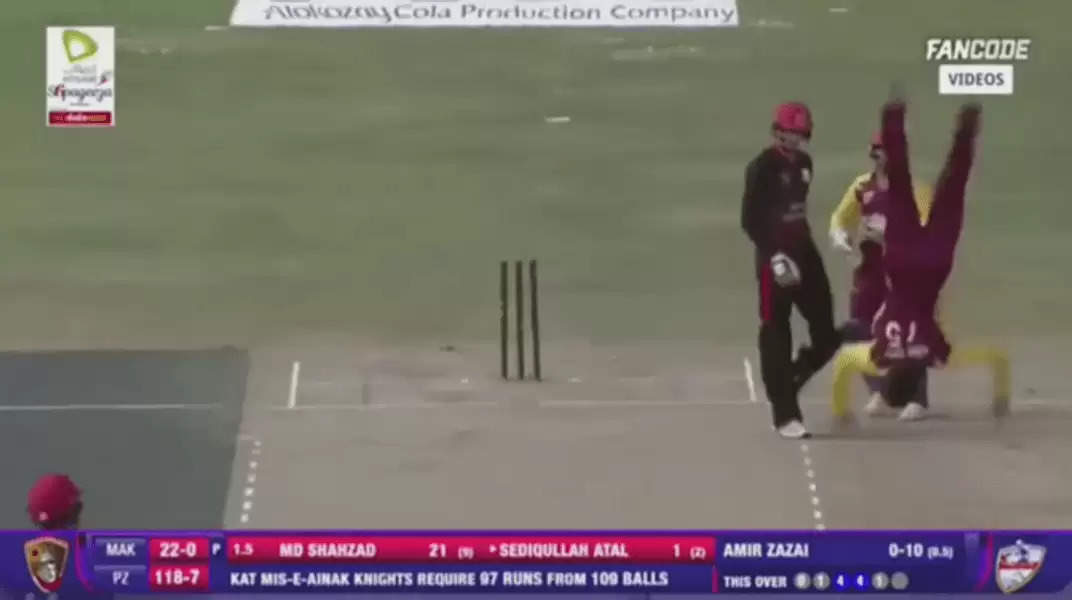 The game of cricket has seen players indulge in all sorts of celebrations following their success on the field. But have you ever seen a player do a proper somersault after taking a wicket?

Amir Zazai of Afghanistan became a rare bowler to do a somersault following a breakthrough in the ongoing Shpageeza Cricket League 2022.

The incident is from Match 16 of this year's edition of Afghanistan's premier domestic T20 competition, where Mis Ainak Knights were taking on Pamir Zalmi in Kabul. Playing for Zalmi, orthodox left-arm spinner Zazai thwarted a no-look attempted big hit from left-hand batter Sediqullah Atal and got him out bowled.

What followed was an eye-catching form of celebration from the bowler, who jumped his way towards wicketkeeper Majeed Alam before standing there proudly with his hands raised.

Amir Zazai showcased his fitness standards with a perfect somersault, leading to amusing scenes for fans who were watching the encounter.

The funny incident took place near close of the second over in the MAK run-chase. Defending their paltry score of 118/7, the Zalmi had seen the opposition race along to 22 for 0 and were in desperate need of a breakthrough.

Providing them one with a skiddy incoming ball, Amir Zazai evaded Sediqullah's downswing and got the ball crashing onto the stumps. The moment the ball disturbed the three sticks, Zazai entered a unique form of celebration as he did a proper somersault towards the batting end.

The cricketer jumped twice on his way to Zalmi's wicketkeeper, before raising his hands to the crowd present at the ground in the capital city of Kabul.

Zalmi failed to eventually defend their poor score, but the match against MAK was a personally fruitful one for left-arm spinner Amir Zazai, who delivered a tight spell of 1 for 23 off his 4 overs.

Zazai will be hoping to continue in this vein as Zalmi strive to bounce back from their loss and stake a claim for the tournament playoffs.