Watch: Controversial run-out in Pakistan's National T20 Cup - batter is ruled out despite losing his bat

Central Punjab batter Tayyab Tahir was at the receiving end of a controversial run-out in Rawalpindi during the National T20 Cup.
By Kashish Chadha Mon, 5 Sep 2022 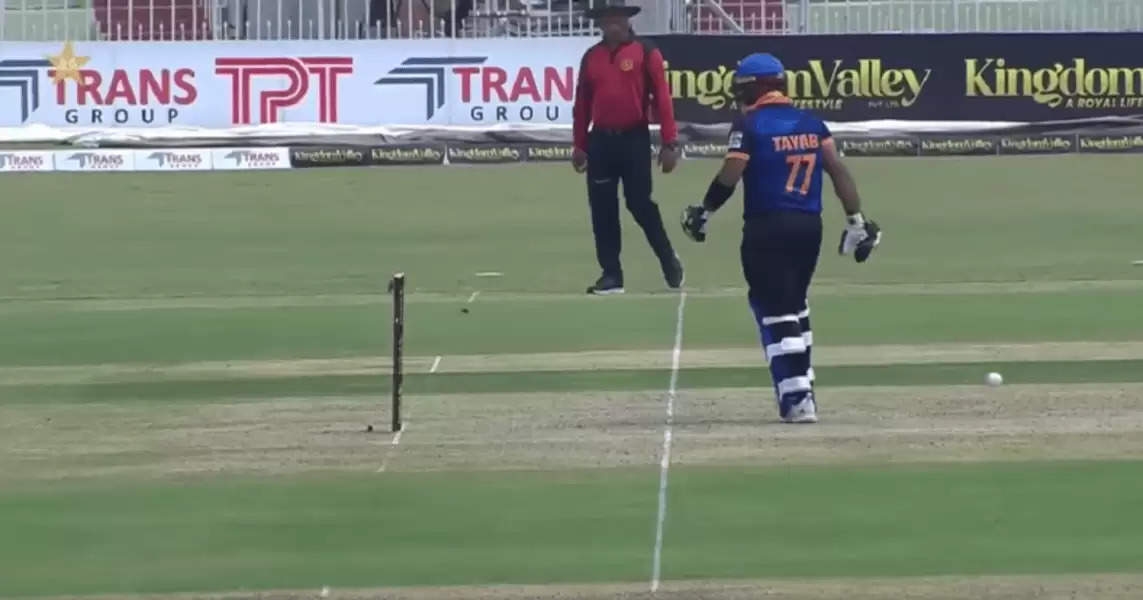 Debatable run-out from the National T20 Cup sees batter given out despite a controversial run-out appeal from the opposition.

A fixture in Pakistan's domestic T20 competition - the National T20 Cup - on Sunday (September 4) witnessed a controversial run-out, where the bowling side affected a direct hit and went for the appeal even as the batter had completely lost the grip on his willow after an attempted stroke.

The batter involved was Tayyab Tahir, the right-hander playing for Central Punjab against the Northern Pakistan side in Rawalpindi. Playing a hoick to a full-pitched delivery, Tahir ended up missing his attempted stroke and saw his bat flying behind square on the on-side after a complete loss of grip.

As the batter went to try and pick up the bat, opposition wicketkeeper Umair Masood made an aim for the stumps and found success with it, before upholding an appeal with the on-side umpire for a run-out. With Tahir outside his batting crease, the decision was upheld in Northern's favour.

The instance has sparked debates on the unwritten 'Spirit of Cricket' once again, putting Masood under the spotlight for effecting the run-out despite knowing Tayyab Tahir has lost his bat and is going up to recollect it and also on Northern skipper Umar Amin for not backtracking from his team's appeal considering the circumstances.

The incident is from near the close of the 13th over in the Central Punjab run-chase. Facing right-arm seamer Salman Irshad, half-centurion Tayyab Tahir missed his attempted big hit, with Northern keeper Masood duly collecting the ball behind him.

The force at which the right-hander went for the stroke was so much that he ended up losing his grip completely and saw it toss-up in the air, before falling behind square on the on-side.

Standing outside the batting crease, Tahir started walking up to collect his willow to continue his innings. But he had the shock of his life when Masood made a smooth run-in towards the stumps and executed a direct hit, erupting in an appeal which bore him the desired result.

Batter loses his grip on the bat. Goes to get the bat and is run out. Poor spirit of cricket from Northern? Or is this fine?👀 #NationalT20 pic.twitter.com/3PY5dbWmIL

But with Tahir evidently making no attempt to sneak in a run in the first place and only looking to regather his willow, was it right for him to make the throw and go for the run-out is now a debate doing the rounds from the Pakistan National T20 Cup.