A stolen car gatecrashed into a live cricket game in Adelaide.
By Kashish Chadha Mon, 2 May 2022 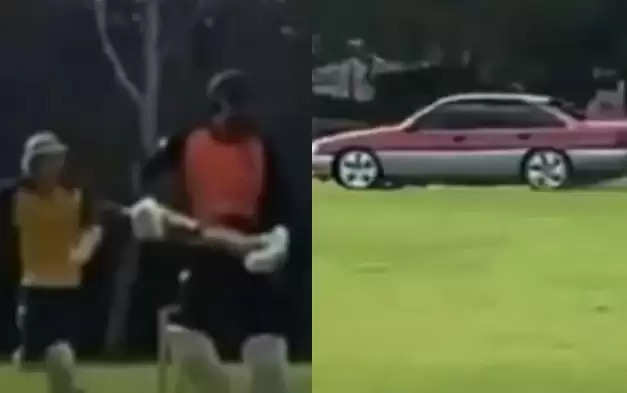 A local cricket game in Adelaide was stopped after a stolen car gatecrashed into the stadium.

In a bizarre incident seen during a live cricket game in the South Australian city of Adelaide, a stolen car gatecrashed into the stadium leading to the most unexpected halt in play.

Australian based news channel '9News' reported about the incident where a couple of individuals accidentally entered the stadium and inspired a shock wave among those present inside the ground.

These intruders were soon taken off the field with handcuffs on after it come to light that they had stolen that vehicle before the accident. As per the 9News report, a 29-year-old male driver and his passenger aged 26 had stolen this car the previous night from the Royal Park situation in the nearby area.

One of the players part of this local cricket game named Kuldeep Dhungana gave a narration of the rarest of rare means of intervention to the play in Adelaide.

"The car was coming straight to us but luckily the driver changed the direction," Dhungana was quoted as saying in the report. It could have easily been a lot worse because the speed that car was going was really huge, even a small collision could be life-threatening."

South Australian Police also confirmed no injuries to the players involved in the local game in Adelaide but divulged on the details of the incident and its backstory. The car stolen at the Royal Park was a red-colour Holden Commodore and was taken off by the offending individuals at 3:20 pm local time.

They initially evaded the sight of the property owner, who later came to the know of his vehicle's stealing while it was being driven in the Largs Bay area. The owner, said '9News' channel, tried to confront with the stealers but they forced him to back down after threatening to hurt him with an axe and flew away.

The owner, however, responsibly contacted the local police about the stealing and the duo was tracked down when they barged into the local cricket match and disturbed the on-field play.