#HardikAbusedRohit trending on social media — Is it true though?

A clip is going viral over Twitter where Hardik Pandya can be heard disappointed over the Rohit Sharma's usage of DRS.
By Kashish Chadha Sun, 10 Jul 2022 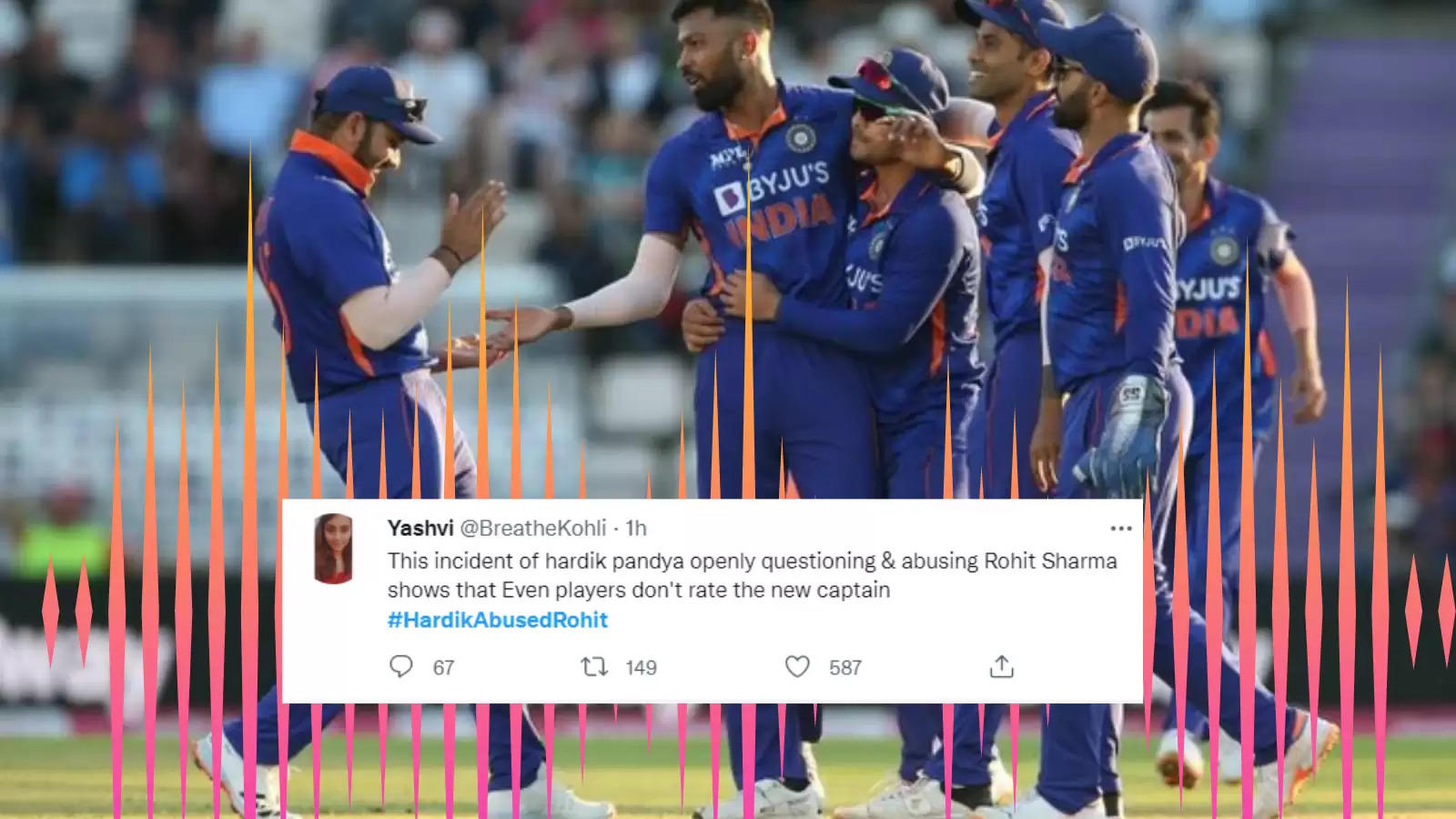 Hardik Pandya and Rohit Sharma shared an interesting conversation in the middle of the second T20I against England.

A shocking video claiming Hardik Pandya threw abusive words towards Indian skipper Rohit Sharma during the second T20I against England on Saturday (July 9) is doing the rounds on Twitter.

In the clip that is trending with the hashtag #HardikabusedRohit, one can hear Pandya is dismayed by the usage of DRS and its handling on the field during the exchange of overs.

The clip had Pandya allegedly telling Rohit to focus on him when it comes to discussions for the DRS when he is bowling and not elsewhere.

Pandya could be heard telling Rohit, "look at me when it's my turn with the ball (for DRS interventions). You don't need to give a f**k to whatever they (rest of the fielders) have to say."

Hardik pandya to Fielder :- qWhen I'm bowling, listen to me & not to that motherf....r(Rohit)#HardikAbusedRohit
pic.twitter.com/3u90a4UuXp

Hardik pandya to Fielder :- qWhen I'm bowling, listen to me & not to that motherf....r(Rohit)#HardikAbusedRohit
pic.twitter.com/3u90a4UuXp

The incident is from after the end of Hardik Pandya's first over during the penultimate game of the three-match T20I series versus England in Edgbaston.

In the clip going viral, some fan accounts are indulging in misinformation and spreading the clip as a case of Pandya abusing Rohit.

Whereas it is clear that the premier Indian allrounder was only telling Rohit not to worry about what others had to say when a DRS concerns his bowling.

The bowler was disappointed by multiple voices plaguing India's clarity when it comes to the DRS process and wanted his captain to not listen to anyone else and focus entirely in his direction.

But the clip attracted interesting reactions from the fans all over Twitter beneath the viral hashtag.

This is how fans reacted to it:

When Virat Was Captain Whole Media nd His haters used to write articles about him that no one likes him in dressing room .

But i would really wants to Thank Aaj tak for bringing this to everyone’s notice#HardikAbusedRohit pic.twitter.com/Kbt3Y4mfn9

There were always problems in the dressing room when Kohli was the captain(as per the paid media outlets).......And no one's gonna talk about this incident now???#HardikAbusedRohit pic.twitter.com/h2PaDeGI7X


Kohli fans have to do a planned trend against Rohit Sharma to make it trending.


We've successfully raised our voice against whatever happened between Hardik Pandya & Rohit Sharma. Whole world will take note now, how Rohit Sharma got abused by his own player#HardikAbusedRohit pic.twitter.com/iPOz3mdtjw


#HardikAbusedRohit under his captaincy tenure nobody did these kind of abusive things #Virat #ViratKohli𓃵 pic.twitter.com/aORJ7IIxFw


We've raised our voice for JUSTICE, we are trending at #3 in whole India. Now whole country can see how Indian Captain Rohit Sharma gets abused & humiliated by his own teammates#HardikAbusedRohit pic.twitter.com/KqudjTEbTh


Hardik Pandya is a type of guy who knows his worth.

He took rest from international to gain full fitness knowing that he could have lost his place.

Came back stronger in IPL won the final as captain+ player.

The idea of Pandya abusing Rohit can also be quashed with simple understanding of the two cricketers' past history.

It is under Rohit's captaincy with Mumbai Indians (MI) in the IPL that the allrounder rose up the ladder to gain prominence within the Indian set-up and from there to the international stage.

Rohit has also been a guiding light in the Indian dressing room for young talents, including Pandya in his initial years at the highest level.