The ex India fielding coach recalled the game where the then head coach wasn't amused by MS Dhoni's approach in the middle and didn't mice words about it.
By Kashish Chadha Mon, 23 Jan 2023 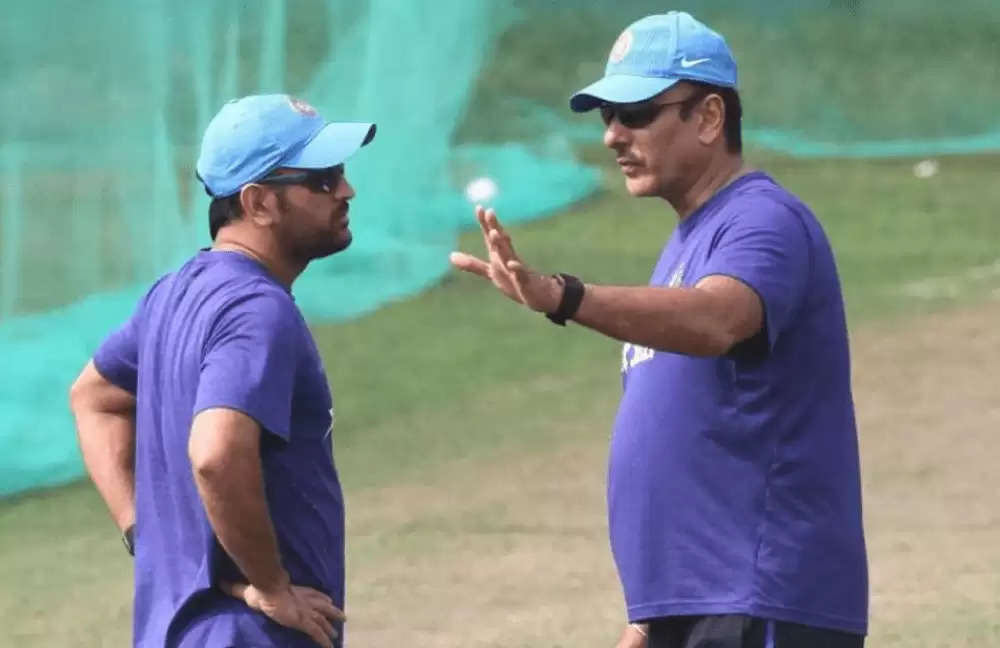 India's ex fielding coach R Sridhar recalled the time when former head coach Ravi Shastri had a burst out aimed at the mighty powerful MS Dhoni. Sridhar reminisced of a game where Shastri wasn't amused by Dhoni's approach in the middle and let the legendary wicketkeeper-batter know what he exactly felt about it.

The occasion dates back to the 2018 tour of England, where after taking a 1-0 lead in the ODI series, India went down heavily at Lord's in the second one-dayer. Chasing over 300, India crashed out by 86 runs with Dhoni curiously not even attempting to slog towards the end.

Shocked by the nature of MS Dhoni's knock, which saw India's required run-rate beef up significantly before they surrendered to the task, Shastri didn't mince words, as per Sridhar, when he addressed the team meeting before the final game in Headingley.

The then fielding coach writes in his book titled 'Coaching Beyond: My Days with the Indian Cricket Team': while Shastri didn't directly pick out Dhoni, he spoke right in front of the ageing middle-order batter and left everyone stunned in the dressing room.

"We were in the hunt when Virat and Suresh Raina were batting, but as we lost wickets, MS was left with only the bowlers for company going into the last 10 overs. Uncharacteristically, he shut shop, and even though our required rate in the last 10 was nearly 13 an over, we only managed some 20 runs in the next six overs," Sridhar remembers.

"That was the innings when MS got to 10,000 ODI runs a very significant milestone. We were all thrilled for him, but we also wanted to know why he hadn't made even a token attempt at the target."

While he was left to bat with an elongated tail with India needing above 12 an over, Dhoni's ill-advised knock of 37 off 59 balls ended any hopes that the tourists had for a victory. Shastri was obviously disappointed by the loss but what got to him most is the nature of the defeat that India faced, giving up well before the finish line and allowing England an easy comeback into the three-match series, which they ultimately won 2-1.

"Ravi, meanwhile, was seething. He was furious not because we lost by 86 runs, but how we lost the game, how we went down without putting up a fight. We didn't go for the target, we didn't go down throwing a punch, we just went down tamely The head coach wasn't going to let that one sail harmlessly by."

"The decider was in Headingley, and we had a team meeting the previous day. The entire squad was in attendance, including all members of the support staff, and I knew Ravi was going to make a strong point."

"He was at his loudest and fiercest as he said, 'No matter who you may be, there should not be another occasion when we lose a match not trying to win it. It will not happen under my watch. And if anyone does it, that will be the last bloody game of cricket they will play under my watch. You can lose a cricket game, no shame in that, but you will not lose like this'," Sridhar recalled in his book.

The former support staff personnel said Dhoni didn't respond to the word of the head coach, knowing he was in the firing line and for the right reasons, having not played according to the situation, something he built his legacy on.

"MS was sitting right there in the front, and while Ravi's words were meant for the team, his eyes were trained on MS To the former skipper's great credit, he didn't flinch, he never broke eye contact with Ravi," Sridhar wrote.

"He didn't look here and there or fidget because one of his many admirable qualities is his ability to take the knocks, especially when he knows in his heart of hearts that he deserves them."