Rishabh Pant responded to outside talk of his direct competition with Dinesh Karthik ahead of the Asia Cup 2022 in UAE.
By Kashish Chadha Mon, 15 Aug 2022 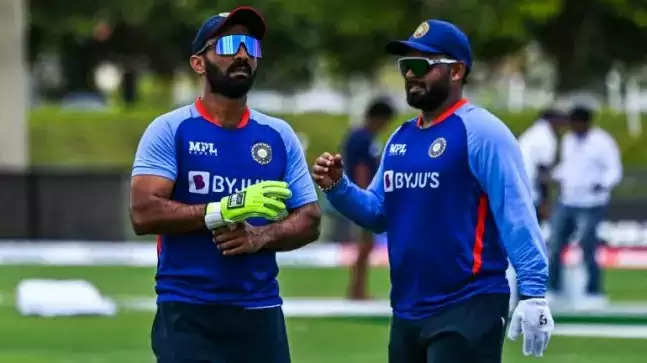 Only one of Dinesh Karthik and Rishabh Pant is set to make the cut for the Asia Cup T20I in India's first-choice XI.

Rishabh Pant played down suggestions of direct competition with Dinesh Karthik for the wicketkeeper-batter's slot in India's T20I side. The youngster brushed aside talks around a potential tussle with the veteran glover for a role in India's likely first XI at the T20 World Cup in Australia in October-November.

With KL Rahul and Virat Kohli returning to the squad, India are in for a major headache to finalise their playing unit before their first game of the Asia Cup 2022 in UAE against arch-rivals Pakistan on August 28.

Only one of Pant and Karthik will be making the cut for the side unless India are willing to compromise their balance and go in with no sixth-bowling cover in Ravindra Jadeja or make a big call and drop the struggling Virat Kohli.

Both the players present attractive options with bat in hand. While Rishabh Pant is the only left-hander present in India's top six and also a widely acknowledged muscler of the cricket ball, Karthik has been a player rejuvenated in the role of an end-overs powerhitter since the beginning of IPL 2022.

What Rishabh Pant said on competition with Dinesh Karthik

Karthik blasted his way to 330 runs at a jaw-dropping strike-rate of 183.33 while averaging 55 for Royal Challengers Bangalore (RCB) in the IPL earlier this year.

It was a campaign that led the 36-year-old's comeback to India colours in T20Is and he has since played multiple cameos of influence and affluence in the end-overs phase.

Karthik's strong comeback has made him a direct contender for the sole wicketkeeper-batter's role and put Pant under further scanner over his sustained low returns in T20Is.

The player, however, stands unperturbed by the outside noise and is in no mood to entertain competition talks with Karthik. He said he and Karthik don't think along those lines and focus on improving their respective games.

"We don't think on those lines. We as individuals always want to give our 100 per cent to the team. Rest depends on the coach and the captain and how the team could get an advantage from that," Pant told Zee Hindustan.

A successful Test and ODI player for the country, Pant has a horrible record in T20Is. After 54 matches, he is averaging 23.86 with a strike-rate of 126.32 in the shortest format.