The TN powerhitter dominated his way to an amazing hundred against the tourists at Chepauk, smashing an unbeaten 100 off 69 balls.
By Kashish Chadha Tue, 8 Nov 2022 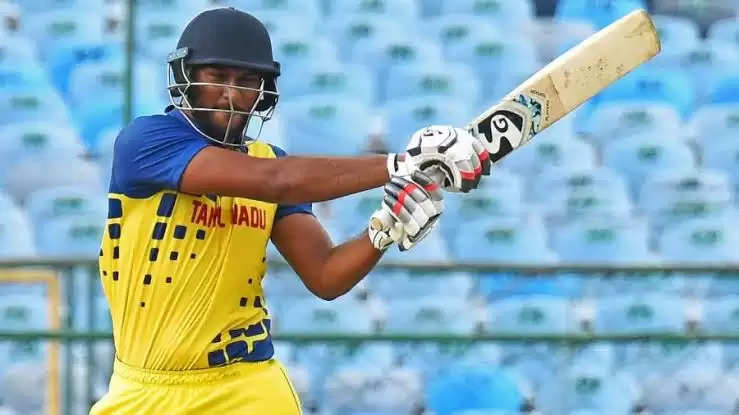 Tamil Nadu's rising sensation with the bat, Shahrukh Khan dominated his way to a superlative hundred against a visiting Bangladesh XI on Tuesday (November 8) during the second one-day game of the unofficial three-match series.

Khan smashed the bowling to all parts to produce a knock of unbeaten 100 off just 69 deliveries, including 7 fours and 4 sixes. The right-hand batter continued his magnificent upsurge with bat in hand with a terrific assault on the touring Bangladeshis at MA Chidambaram Stadium in Chennai.

Walking into bat at No.6 with TN finding themselves in less-than-satisfactory position at 128/4 in the 25th over of the innings, Shahrukh Khan came out all guns blazing and put all the pressure back on the opposition. It was an innings that featured shots all around the park to take Tamil Nadu to stiff-looking 306/7 in a rain-marred 47-overs a side game.

In another knock where his powerhitting skills altered the on-field proceedings for TN, Shahrukh Khan pulverised the hapless Bangladesh attack through an excellent century, including extravagant strokeplay that the player had made a name for himself with.

For Shahrukh, the knock would've been personally very satisfying as it came with TN finding themselves in a corner, needing someone to resurrect their grip over the contest. His innings did exactly for the side, allowing them to recover from a middling 128/4 to post an intimidating 306/7 by the end of the 47th over.

Relishing the pressure in the middle, Shahrukh went above a strike-rate of 144 with great belligerence and impact an inexperienced visiting attack, missing the best of Bangladesh's limited-overs squad that just ended their T20 World Cup campaign in Australia.

Also Read: If I was Babar, I would get hold of that guy: Wasim Akram lashes out on Pakistan's unique idea this T20 World Cup

That, however, takes nothing away from the quality of the knock on display from Shahrukh Khan, who sent a timely reminder to the IPL franchises of his capabilities as the caravan rolls forward to the auction for the next year's edition.

The youngster endured a difficult season with Punjab Kings (PBKS) in IPL 2022, making only 117 runs from his eight innings at a strike-rate of 108.33. IPL franchises would know, however, it was only a blip for a player whose future is considered bright by the top brass of Indian cricket.