Watch: "She didn't come to Trent Bridge, you scored a ton" - Ishan Kishan reveals funny anecdote on Suryakumar Yadav and his wife

Suryakumar Yadav and Ishan Kishan were involved in a funny exchange after the third T20I against the West Indies in St Kitts.
By Kashish Chadha Wed, 3 Aug 2022 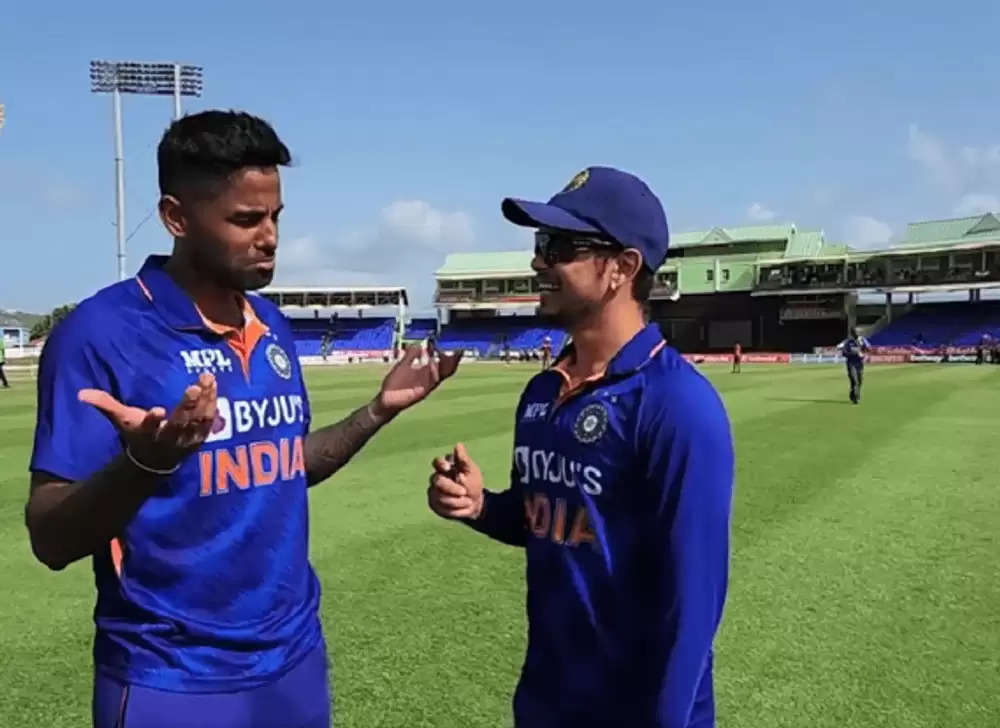 Suryakumar Yadav has been absent from matches where the batter has scored substantially for India in past few weeks.

Two funny characters inside the Indian change room, Suryakumar Yadav and Ishan Kishan, indulged in an amusing conversation where a hilarious sequence came to light in relation to the former's wife.

Kishan took Suryakumar's interview for BCCI.tv where he asked the batter to shed light on his remarks to his teammates about his wife.

Kishan revealed the batter's words wherein he realised that whenever his wife has been skipping matches, he has gone on to put a substantial score on the board. And whenever she has been present at the venue, the right-hander has failed.

The pattern has came about in recent weeks, where Suryakumar Yadav scored his maiden T20I century in Trent Bridge with his wife Devisha absent from the ground. But when she arrived for the subsequent matches, the batter failed in the ODIs versus England and the first two T20Is against the West Indies.

Now again, with Devisha absent from the Warner's Park at St Kitts in the third game of the five-match series, the Indian batter recorded a match-winning 76 off 44 deliveries.

During the interview for the Indian board's site, Kishan brought the spotlight on Suryakumar Yadav's remarks made on wife Devisha inside the dressing room and urged him to simply repeat what he said.

The youngster revealed Suryakumar telling his India mates about the sequence where whenever Devisha has been absent from the venue in recent weeks, he has scored big.

Put under the scanner, Suryakumar hilariously tried to cover up for what he said and added: "No no I am not going to lie about things.. you see when a man lies, he stammers and isn't able to speak straight. I will not stammer and will repeat what I said in the dugout."

"See it is not important for your partner to come to the ground, what is more important is that she is with you, standing strong behind your back."

Of special knock, learnings & an anecdote 💪 😃

"She may not be at the ground, but she is present in this country with me.. that is the most important thing. You see I have her name tattoed on my chest, so she is always close to my heart and since she is present in the same place, her powers anyway enter the ground and help me," he added, leading to laughter between both the cricketers.
From around the web
Weekly Trending