Three of India's leading male players are part of the ICC's men's T20I XI of the past 12 months, which featured a T20 World Cup in Australia.
By Kashish Chadha Mon, 23 Jan 2023 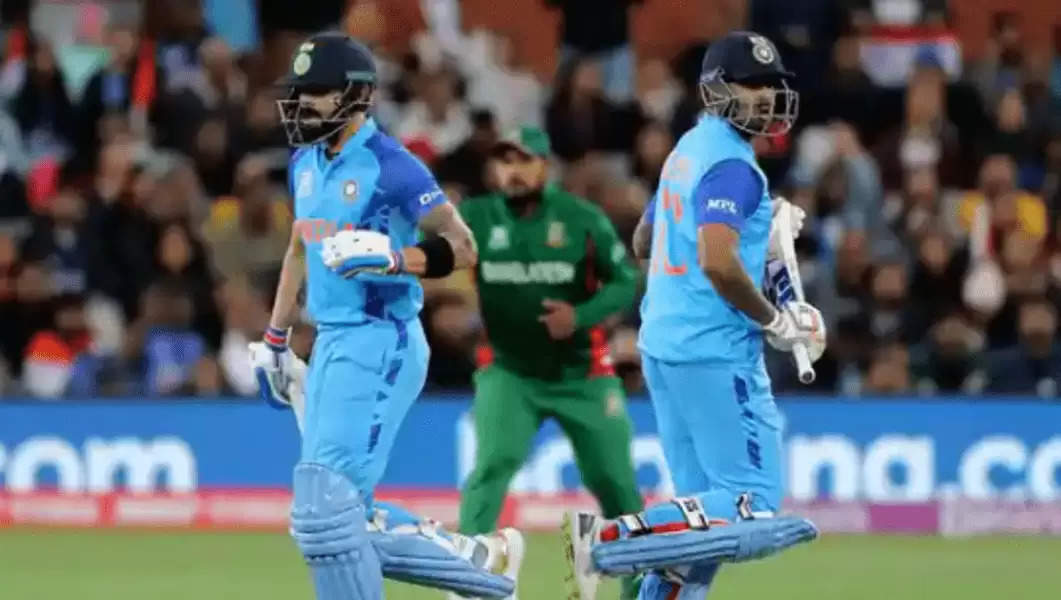 Kohli, who finished at the top of the runs-chart for the T20 World Cup 2022 in Australia, retains the No.3 spot in a star-studded batting line-up after a period of resurrection with the bat. The great batter made 296 runs over the course of the showpiece event Down Under at an average of 98.66 while finishing with a SR of 136.40.

Only second to Kohli and overall third in the list of tournament's run-makers was India's sensational batting maverick Suryakumar Yadav, who collected his 239 runs at a strike rate of 189.68 while averaging a whopping 59.75. His tally featured three half-centuries, including a high-quality knock in Perth in tough conditions against South Africa.

Suryakumar enjoyed unprecedented dominance in T20Is over the past year. He finished as the leading run-getter with a whopping 1,164 runs made from just 31 T20Is, averaging 46.56 with a jaw-dropping SR of 187.43.

Playing one of the three key allrounders in ICC's men's T20I team of the year is Pandya, who struck a belligerent fifty in the semifinal loss to England at the Adelaide, proving to be India's only real positive on the night. He finished with 128 runs at a SR of 131.95 and 8 wickets with his handy right-arm seam bowling for the tournament.

Hardik Pandya bats No.7 in a balanced ICC men's T20I playing XI for 2022, where 'Player of the Tournament' for the World Cup in Australia - England allrounder Sam Curran - bats one spot lower to him at No.8, adding depth to the side led by the rampaging wicketkeeper-batter Jos Buttler.

Curran played a key role in England's second T20 World Cup title by grabbing 13 wickets in just six innings at an astonishing ER of 6.52. The left-arm pacer was terrific during the final at the MCG versus Pakistan, where he finished with figures of 3/12 off his 4 overs in what was a decisive first half.

Part of this esteemed group of allrounders at No.6 in a great line-up is Zimbabwean Sikandar Raza, who was his country's stand-out performer throughout the competition. Raza was not only Zimbabwe's top run-maker but also their second highest wicket-taker, scoring 219 runs and taking 10 wickets.

After a slowish start to the T20 World Cup, Buttler reigned supreme for England and finished with 225 runs at 144.23. The three lions' captain didn't have an overall great year with the bat but rose his game a notch higher when it came to the biannual event in Australia, especially the semifinal encounter against India.

Partnering him at the top is Pakistan's wicketkeeper-batter and opener Mohammad Rizwan, who continued his sedate and consistent ways at the top with 996 runs from 25 T20I innings in the year 2022.

Round off an eye-catching top six that features the Buttler-Rizwan duo at the top followed by the middle-order trio of Kohli, Suryakumar and Raza is New Zealand's game-changer Glenn Phillips at No.5. Phillips scored one of the best T20I hundreds fans have witnessed in recent times during a T20 World Cup game against Sri Lanka. With the Kiwis in strife at the SCG, the aggressive right-hander blasted a match-winning century and ultimately finished the year with 716 runs made at a SR of 156.33.

On the bowling front, the ICC picked Sri Lankan Wanindu Hasaranga as the lead spinner for their men's T20I side of the year 2022. He picked up 34 wickets in just 19 matches of the past 12 months with an exceptional ER of 7.40.

To round off the XI, the governing body has roped in pace duo of Pakistan's Haris Rauf and Ireland's young impressive Joshua Little, who took a hat-trick at the T20 World Cup and was his team's biggest positive. Little finished 2022 as the second highest wicket-taker of the year in men's T20Is. At the other end, Rauf bagged 31 wickets at 7.54 an over despite bowling all the difficult overs for Pakistan.