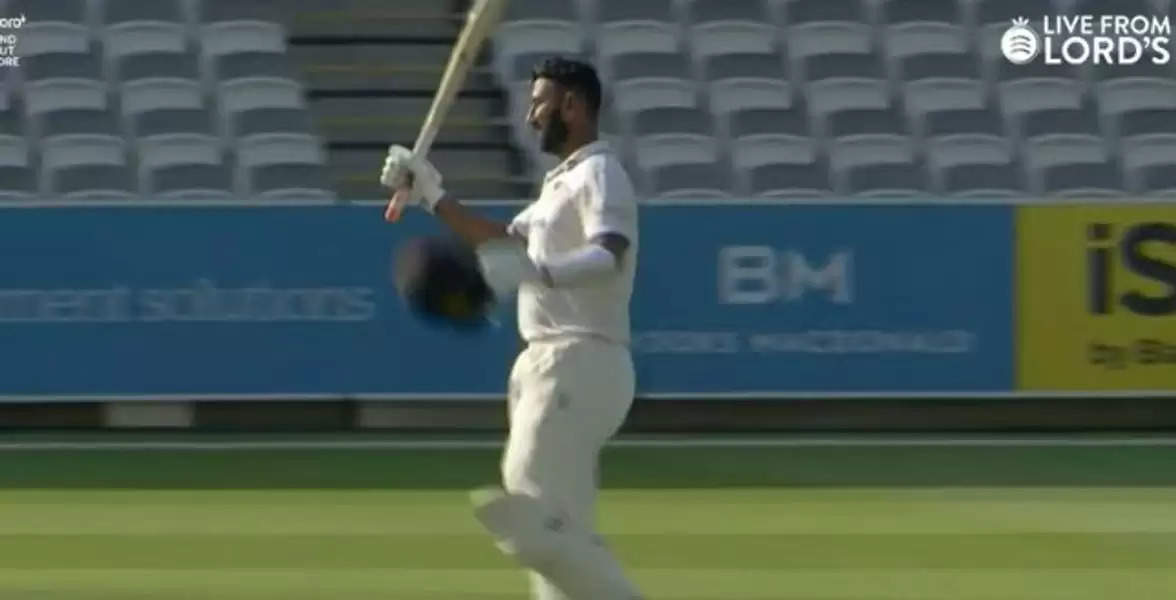 Stricking his fifth hundred for Sussex this season, Cheteshwar Pujara took his Championship tally to a jaw-dropping 881 runs.

Cheteshwar Pujara continued his rich vein of form in his ongoing county stint with Sussex. The veteran India batter scored another hundred for the prominent County Championship club.

Facing the Middlesex attack at Lord's, the stand-in Sussex captain struck his maiden first-class hundred at the marquee venue, producing an exceptional knock to give Sussex an upper hand on Day 1 of the Division 2 encounter.

Walking into bat at No.4 with Sussex 99 for 2, the right-hander smashed an unbeaten 115 to help his team reach a position of strength at 328/4 by the close of play.

Pujara's knock was glint with his superlative defence and quality strokeplay as he hammered the Middlesex bowling unit to all parts of the ground and raised his bat to the gallery upon reaching another hundred to his name.

Cheteshwar Pujara rallies on for Sussex in county cricket

Partly down to the nature of the challenge at hands and his own great touch with the bat, Pujara reached his milestone in fairly quick time. The batter struck his hundred in only 144 deliveries, carrying an overall strike-rate of 63.19. He has a strike-rate of 44.15 in Test matches for India.

Always the most pragmatic judge of the window of scoring opportunity within a delivery, Cheteshwar Pujara opened up his shoulders and gave the struggling opposition the treatment it deserved.

Ever since the start of his stint with Sussex, the right-hander seems to have gotten his stance a little open-chested and is playing with the moving ball a lot more than he did. This has helped Pujara ride the swing rather than be found late in reacting to it, avoid the edges and connect the ball sweetly.

He has also readjusted his stance to a more balanced one than overpressing on the fronfoot irrespective of the length of the ball. This tweak has given Pujara more time to gauge the ball and punch it through the off-side.

The ton against Middlesex was his fifth for the stint with Sussex. He has now scored a whopping 881 runs for the club from just 10 innings, averaging a massive 125.85.