MP opener Yash Dubey was caught in the most awkward angle playing a bouncer from the Mumbai quick.
By Kashish Chadha Fri, 24 Jun 2022 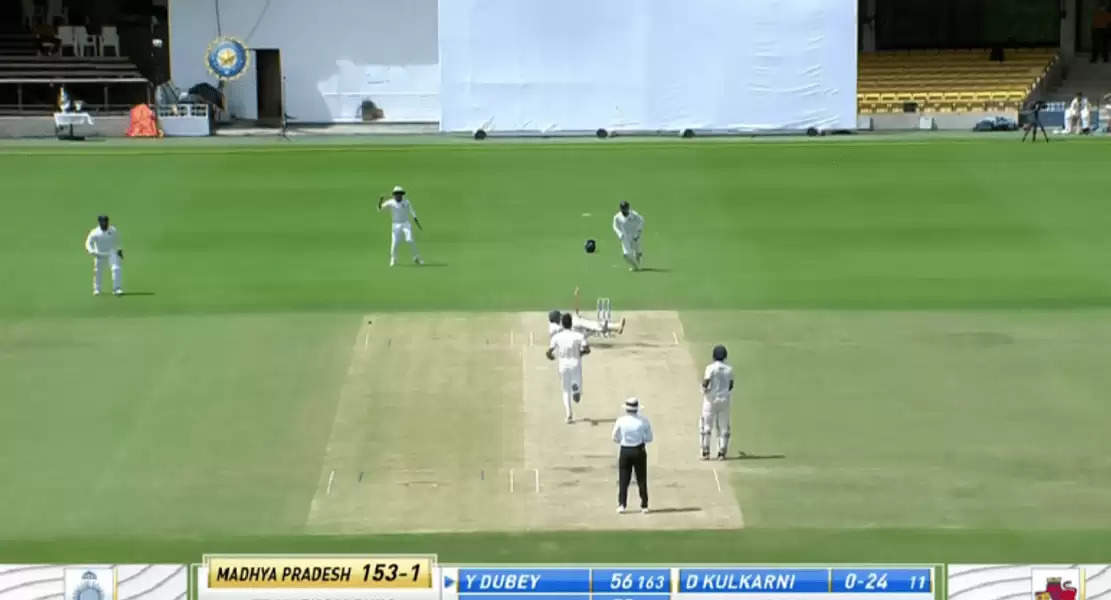 Despite the blow off Dhawal Kulkarni, Yash Dubey went on to record a hundred in the Ranji Trophy final.

MP opener Yash Dubey found the most awkward angle to tackle a bouncer from Mumbai's veteran pacer Dhawal Kulkarni in the Ranji Trophy final on Day 2 of the much-anticipated game this Friday (June 23).

Facing Kulkarni's short-pitched ball, Dubey looked as if he was caught up thinking of something else and could never sway out of the way of the delivery.

The bouncer from the Indian right-arm seamer thudded onto the batter's chest as he immediately collapsed on the turf in pain. Dubey, interestingly, got up quite swiftly despite the blow. But to those watching the game, it was clear that the speed of the bouncer from Dhawal Kulkarni had pained and bruised him.

Despite him batting on 56 off 113 deliveries in MP's first-innings at the time, Dubey looked clueless when Dhawal Kulkarni got his bouncer to rise sharply into the right-hander and played it in a bizarre fashion that no coach would advise his wards to do.

Dubey's feet got jammed into the deck for a split-second extra and he was too late in his attempt to try and get back and across on his pull shot. He tried to duck underneath the ball, too, but none of that was possible.

What made it difficult for Dubey is the pinpoint nature of the bouncer from Kulkarni, who is usually just about medium-fast but got this one to bang in at higher speeds and for it also tail into the batter ever so slightly. The ball bumped onto the batter's left-hand shoulder and left him in pain.

Notably, though, Dubey got up from the ground in a matter of seconds, as if to send an indirect message across to Dhawal Kulkarni and the rest of the opposition camp that he isn't ruffled by the whole episode and is more determined after the blow.

That determination to grind came in handy deeper into the second day of the Ranji Trophy final in Karnataka, as Dubey went on to record a critical hundred for MP.