Hasan Ali unleashed his famous celebrations for Lancashire during their County Championship game against Kent.
By Kashish Chadha Sat, 16 Apr 2022 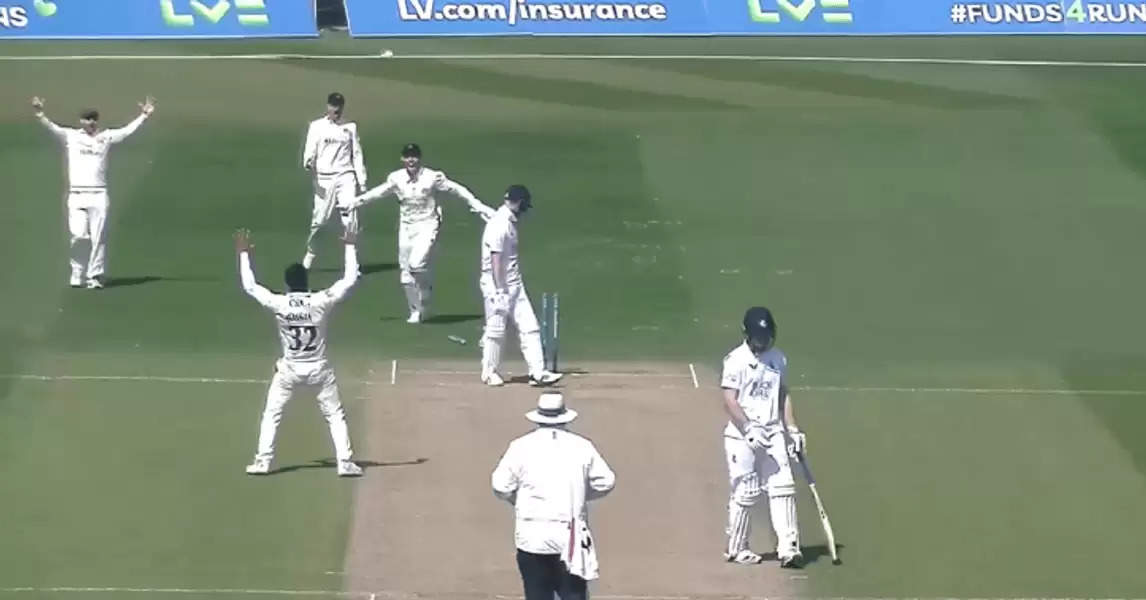 Hasan Ali went through his famous celebrations after the wicket of Jordan Cox.

Pakistan fast-bowler Hasan Ali is enjoying his time out in early days of his latest County Championship stint with Lancashire.

In a clip shared by the Lancashire county over Twitter, Hasan was seen going through his famous mode of celebration after getting Cox out bowled in the Division 1 county fixture.

Announcing that their Pakistan recruit is "already cleaning up the batters" in County Championship, Lancashire share a clip with cricket fans on their official Twitter feed, where Hasan Ali could be seen running through the gate against Cox.

The skiddy right-arm pacer bowled a reasonably short-pitched ball, which tailed into the right-hander upon landing and sent his stumps cartwheeling at the St Lawrence Ground in Canterbury.

Cox shouldered arms in anticipation of the ball sailing over the three sticks behind him, only to see it keep a touch low and crash onto the stumps. The ball thumped on the batter's off-stump and left him distraught about his error.

The moment the dismissal was secured, Hasan Ali entered his famous celebrations where he goes down on his crouches before raising his hands like an explosion. The batter also waved his right hand to add to his celebrations on this occasion.

Hasan has been celebrating this way since the start of his international career for Pakistan. So committed he has been to his act post breakthroughs that he once ended up twisting his neck during a match against Zimbabwe in Harare.

WATCH: Rohit Sharma mocks celebrations off non-catch to cheer up the crowd

The batter went down on his crouch but as he got up to try and finish off the celebration, he developed a stiff neck and felt discomfort for the rest of the game.