WATCH: Jonny Bairstow with a stunning fielding effort; nails a direct hit from the boundary to run Deepak Hooda out

Jonny Bairstow delivered a pinpoint throw at the stumps to catch the sloppy Deepak Hooda short of his ground.
By Kashish Chadha Sat, 30 Apr 2022 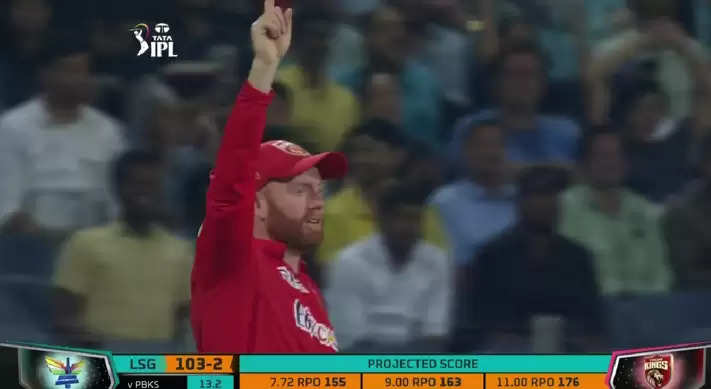 Deepak Hooda paid the ultimate prize for a poorly attempted second run after a superb throw from Jonny Bairstow.

Usually placed behind the stumps, Jonny Bairstow displayed his brilliance in the outfield via a direct hit run-out for Punjab Kings (PBKS) in their IPL 2022 league-stage encounter on Friday (April 29).

Bairstow found Lucknow Super Giants (LSG) right-hander Deepak Hooda short of his ground on an attempted two along with batting partner Krunal Pandya. The infamous duo was involved in a mix-up and a run-out, with Hooda being the culprit of some lazy running.

Even as Krunal seems to have got the two runs covered off his willow, Hooda never really committed to it and made a very sloppy effort to get back at the other end. It is only near the conclusion of the second run did the batter showcase some urgency.

Catching him off guard with a terrific throw from the deep was Jonny Bairstow, whose excellent shy at the stumps resulted in a crucial wicket for PBKS.

The run-out was seen at the halfway mark of the 14th over in LSG's first-innings in Pune. Facing a short-pitch delivery from left-arm pacer Arshdeep Singh, Krunal hit the ball through the mid-wicket region, quite far off Jonny Bairstow, who had to run across and collect the ball.

Given the time available at hand for Krunal and his batting partner Hooda, a certain two looked on the cards. But while Krunal quickly sprinted across the other end, Hooda almost jogged his first run and repeated that for the best part of the second run as well.

Moments after the run-out was completed, Krunal looked at his partner in bemusement at his speed across the 22-yards. In complete contrast was the expression on Jonny Bairstow's face, as the England cricketer celebrated a rare run-out off his hand with his jubilant Punjab teammates.