Fans were left to mend with a leaking roof in one of the stands in Bangalore for the fifth India-South Africa T20I.
By Kashish Chadha Mon, 20 Jun 2022 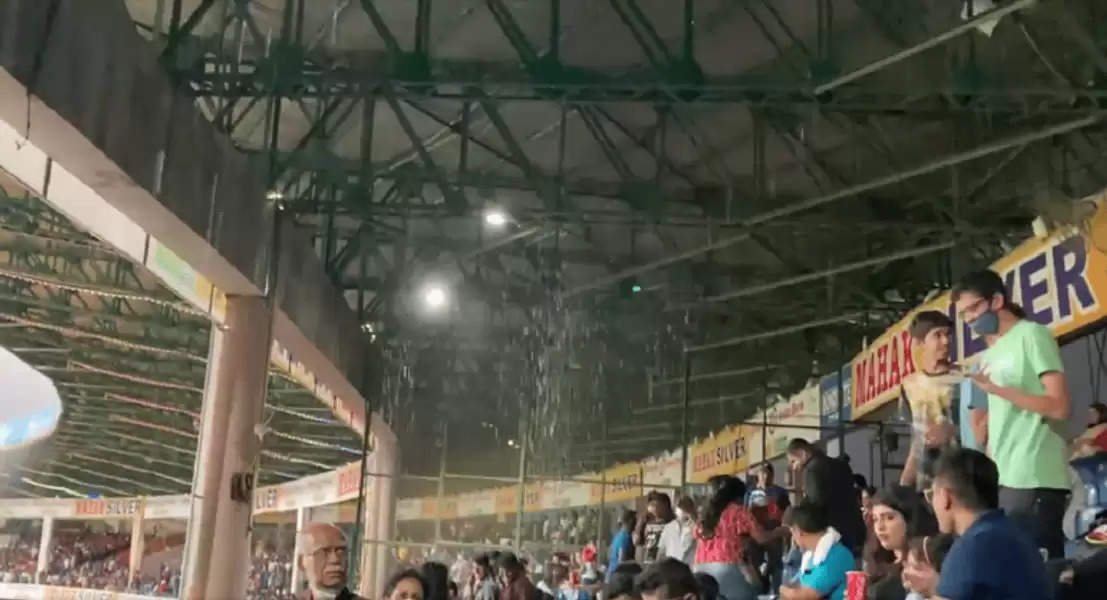 Fans had to evade water running out of leaked roofs in one of the stands at KSCA's Chinnaswamy Stadium in Bangalore.

Fans were left in pain over the arrangements made at the M. Chinnaswamy Stadium in Bangalore on Sunday (June 19) for the fifth India-South Africa T20I, after rain showers sneaked through the roof of one of the stands and spoiled their cricket watching experience.

A video surfaced over social media on the night of the rain abandoned fixture in the city where fans had to evade the water coming out of the space between the tins adjoining the roof of the stand in the sitting area.

As fans bemoaned the washout for what was shaping up to be an exciting decider of the T20I series between India and South Africa, a cricket lover going by @srini_ramamohan posted a clip on Twitter, revealing how the bigger disappointment was the arrangements made by KCSA and BCCI.

In a clip posted by this Twitter user, water could be seen splashing onto the sitting area of one of the stands at the Chinnaswamy Stadium in Bangalore from the leaking tins that made for the roof over the stadium.

The clip once again brought into spotlight the arrangements made for fans and their viewing experience at various cricket grounds in India by the Board of Control for Cricket in India, and in this case, the Karnataka State Cricket Association, too.

"The richest board in the world and these are the kind of conditions their fans need to put up with!" he asked, adding: "when will @BCCI @kscaofficial1 improve fan experience befitting the stature of the sport??"

What was even more disappointing was the state of affairs inside the stadium! The richest board in the world and these are the kind of conditions their fans need to put up with! When will @BCCI @kscaofficial1 improve fan experience befitting the stature of the sport?? pic.twitter.com/eacucPnwUp

In this day and age, providing such poor conditions for the fans is an unforgivable offence. Given that the rain threat was looming, the fact that authorities made insufficient effort to ensure all the stands had a safe and sound roof shows how much for granted they've taken the local fans.

These authorities are quick to blame the fans when there is any mishap seen on the cricket field, but never own responsibility for giving them inadequate facilities at the ground despite earning crores from the gate money.