Watch: Rahul Dravid gets shy, smiles at the giant screen for showing his batting numbers

The Indian head coach came up with a priceless reaction after the giant screen at the Eden Gardens in Kolkata displayed his great stats for India.
By Kashish Chadha Fri, 13 Jan 2023 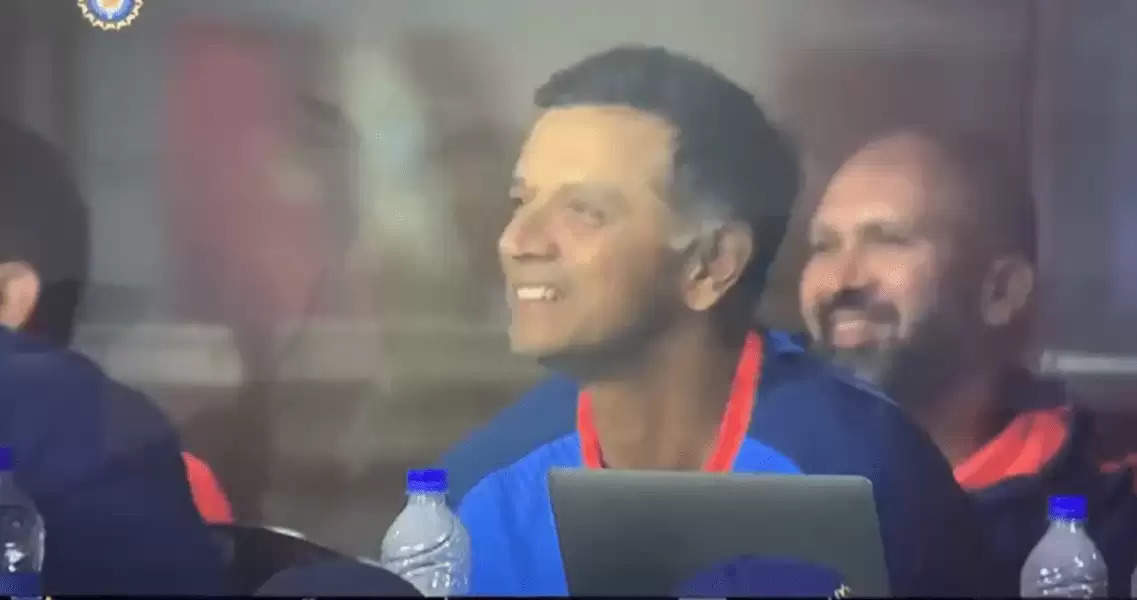 Rahul Dravid couldn't help but grin as the giant screen at the iconic Eden Gardens in Kolkata displayed his great numbers for India in international cricket during the second ODI of the series against Sri Lanka on Thursday (January 12).

The Indian head coach was seen extremely shy, offering his innocent smile towards the screen and having an instant laugh about it from the Indian dugout, with the commentary team lauding the great player for his yeoman service to Indian cricket.

The incident took place during the 25th over of the Indian run-chase in Kolkata. As cameras rolled on to Rahul Dravid, seemingly someone sitting next to him pointed out to him that they have his stats displayed on the giant screen.

The legend instantly went shy about it, recognising the commentators must be talking about him, having been a commentator himself briefly after retirement. In jovial mood, playing with a ball, he offered the most heartening of smiles and shared a joke with the support staff personnel sitting next to him.

Rahul Dravid gets shy after Eden Gardens displays his stats

At the point of completion of the fifth ball in the 25th over delivered during the Indian innings, Rahul Dravid turned towards someone sitting next to him, who presumably directed him to the giant screen, which had him and his stats displayed alongside, which the commentators were talking to the viewers about.

Knowing he is centre of the attention, Dravid went all too shy and came up with an amusing smile, which made for a priceless reaction from a man who doesn't like the limelight too much. The Indian batting genius turned coach instantly turned to the personnel sitting alongside him and shared a joke with them, which them got them laughing too.

In his illustrious 16-year-long career for India, Rahul Dravid, who turned 50 on January 11, played 164 Tests, 344 ODIs and a standalone T20I. A stoic, dependable asset for Indian cricket, Dravid bid adieu to the game in early 2012 after scoring nearly 25,000 international runs.