Sachin Tendulkar rewind the clock with the bat in the Road Safety World Series T20.
By Kashish Chadha Tue, 20 Sep 2022 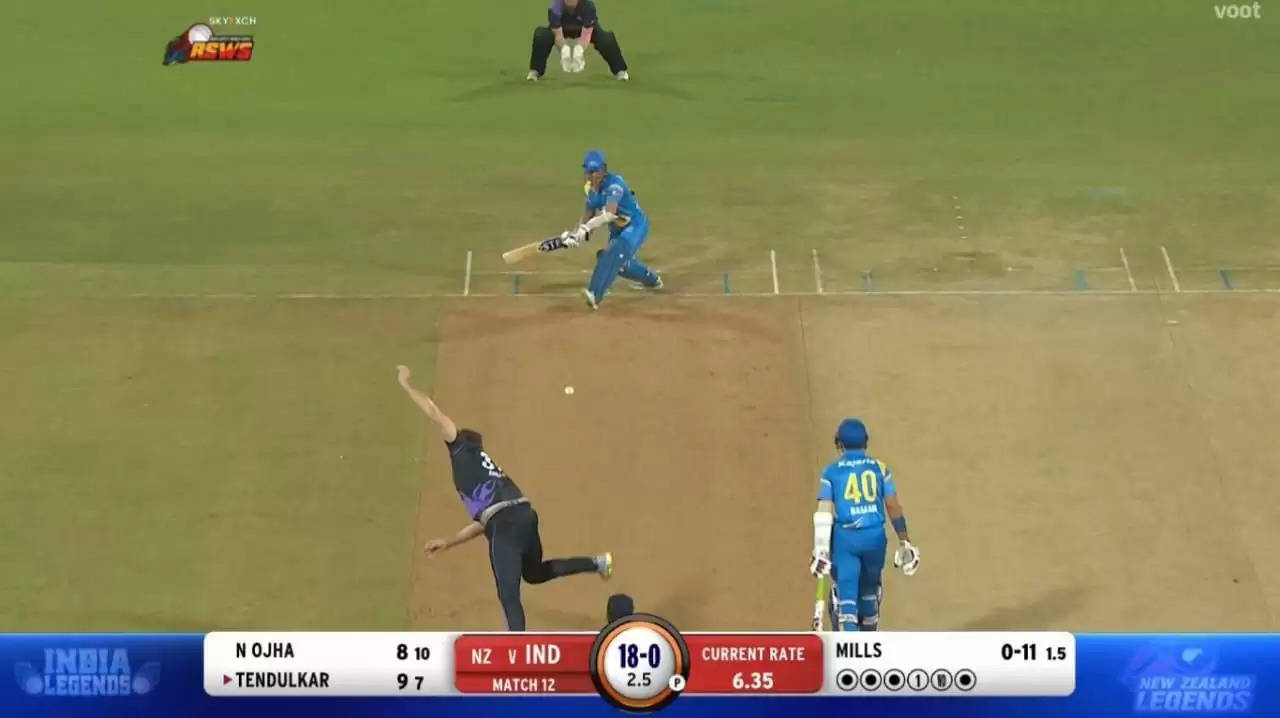 The master blaster was at his very best for a brief cameo in a rain-abandoned game for India Legends.

Sachin Tendulkar is rolling back the years in the ongoing Road Safety World Series T20. The legendary batter has been mesmerising the fans in Indore with some scintillating strokeplay, reminding them of his heyday when he smashed opposition bowlers for fun.

In one such stroke, Tendulkar unveiled his T20 streak by playing a magnificent scoop shot that nearly flew over the boundary behind square for a maximum. The master blaster played this shot during his India Legend's rain-abandoned league stage encounter versus New Zealand Legends on Monday (September 19).

The match only lasted 5.5 overs before bad weather put in irrevocable pause on the proceedings, but that was enough for Sachin Tendulkar to come out with four delighted boundaries in his vintage little knock of 19 not out off 13 deliveries.

One of these fours was an outrageous ramp shot, which went sailing towards the backward square leg region, almost hitting on the boundary line on the full for a maximum. The shot not only reinforced Tendulkar's great timing but also his child-like enthusiasm for the game, as the 49-year-old didn't at any stage of his innings gave the impression he has been a retired cricketer for nearly eight years now.

Facing a straight ball aimed for the stumps by New Zealand Legends speedster Shane Bond, Sachin Tendulkar went back and across to his right, created space for himself to get underneath the ball perfectly before unleashing a perfect scoop shot.

Tendulkar didn't always play this stroke in his peak days as an international cricketer but incorporated it with time into his armoury, playing the first league editions of the Indian Premier League (IPL) for Mumbai Indians (MI). He did play the ramp on occasions but not the full-blooded scoop like this.

Watch: Naseem Shah stuns all with an unconventional helicopter shot at Pakistan nets

Even at this age he can hit ball with this ease what a legend pic.twitter.com/Yuzjs5Iw8d

That changed on Monday in front of a packed Indore crowd. Tendulkar, having missed out in the game versus South Africa Legends earlier, looked in mood to make up for it with a substantial score.

But the rains spoiled the fun for him and also the spectators who were awaiting their favourite star to raise his bat to the gallery.