Sanju Samson got run out batting superbly on 54 off 50 deliveries during the second ODI in Trinidad.
By Kashish Chadha Mon, 25 Jul 2022 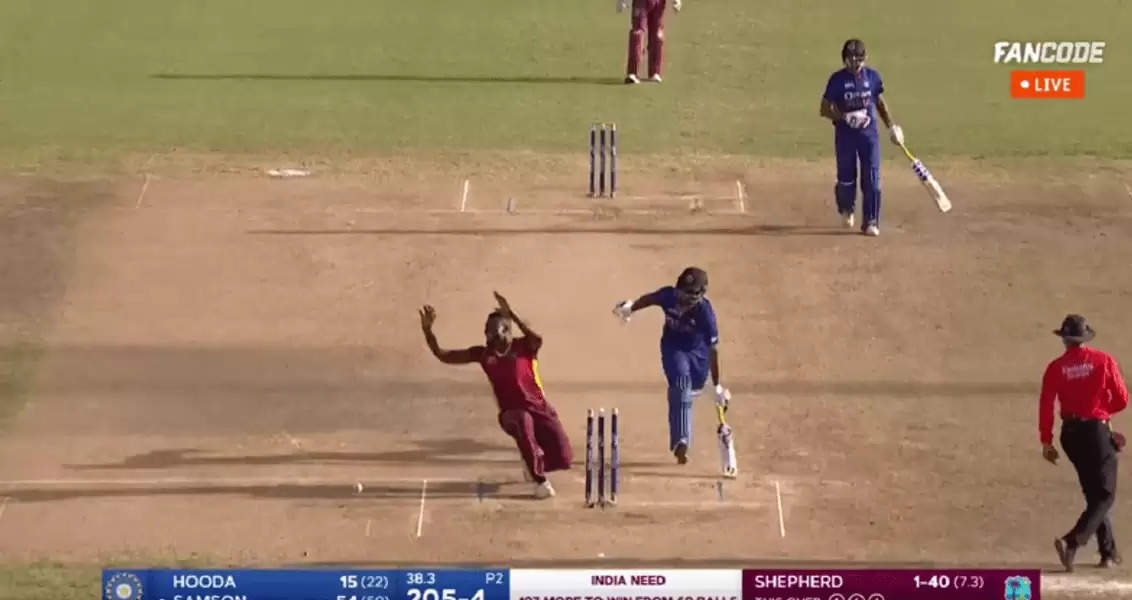 Eyeing a match-winning knock, Sanju Samson had his hopes dashed via an avoidable run-out.

Before Axar Patel's heroics sealed the win for India, the visitors found themselves in a spot of bother during the second ODI against the West Indies on Sunday (July 24). To mount their troubles chasing a huge target of 312, the tourists had a well-set Sanju Samson getting run out following a horrible mix-up with Deepak Hooda.

Batting superbly on 54 off 50 at the time, Samson had his eyes set on a match-winning hundred at his end. But the elegant batter had his dream vanish infront of his eyes through a disastrous run-out with Hooda, who called him into a run that perhaps wasn't there.

Facing Romario Shepherd, the right-hander went for a flick straight into the hands of the fine-leg fielder. A bit late to commit to the single, Sanju Samson was rushed into it by a call from Hooda.

The batter may have still made his ground at the other end, but was done in by a throw at the stumps from Kyle Mayers. The ball hit Shepherd's legs on its way to colliding with the three sticks, leaving Samson in dismay as he walked back to the pavillion.

The run-out was seen at the halfway mark of the 39th over of the innings in a critical juncture of the second half. Chasing 312, India were building up for a final flourish, with Sanju Samson trying to stretch his partnership with Hooda. But the tourists lost their set player to an avoidable run-out as Hooda perhaps misjudged the availability of the single.

Samson was clearly rushed into the single by his partner, who gave him a late call to go for it. The batter still dashed out his crease and might have survived if not for the accurate throw from Mayers from behind square on the on-side.

That's a big blow for India. A very unfortunate run out for @IamSanjuSamson

That's a big blow for India. A very unfortunate run out for @IamSanjuSamson

The run-out denied Samson an opportunity to be a hero for his country and strengthen his case for selection as a backup wicketkeeper-batter in the 50-overs version.

Had the batter gone on to make a match-winning hundred, he would've produced that elusive stand-out knock for India that his huge fanbase has awaited for a long time.