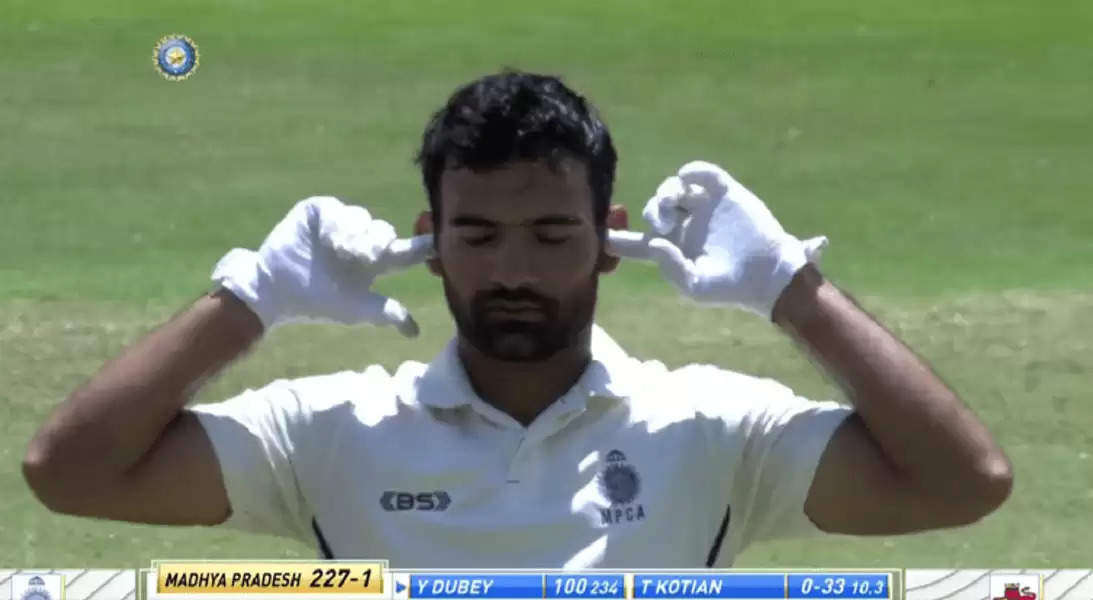 The Madhya Pradesh opener followed the celebration mode of the Indian opener in the Ranji Trophy final.

KL Rahul's 'shut the noise up' celebration seems to have caught up within the domestic first-class cricket in India, with MP's Ranji final centurion Yash Dubey on Friday (June 23) unveiling the celebrations after reaching his milestone against Mumbai.

Much like Rahul drops his helmet and goes numb with his hands closing off his ears to suggest the outside noise doesn't have any effect on him, Dubey did the same upon completing his fighting hundred versus a rounded Mumbai bowling attack in Karnataka.

Hitting Mumbai spinner Tanush Kotian for a boundary, Dubey mimicked KL Rahul at the Chinnaswamy Stadium in Bangalore by letting go off his helmet, his gloves and closing out his ears to make his own 'shut out the noise' gesture.

This mode of celebration has been made quite famous by the ever-elegant KL Rahul in the past few years. The right-hander does it almost every time he reaches a hundred in international cricket for India or while playing the Indian Premier League (IPL) for Lucknow Super Giants (LSG).

The celebration seems to have inspired Dubey, too, who overcame an in-form Mumbai bowling attack to produce a critical hundred in the first innings of the Ranji Trophy final. As MP strived to overhaul Mumbai's 374 all out, Dubey reached an unbeaten century in a magnificent partnership with No.3 Shubam Sharma.

Just as he reached the much-savoured milestone with a boundary against the fingerspin of Kotian, Dubey, who was looking ever so calm despite the magnitude of the occasion, went into a zen mode and started dropping his helmet, before letting go off his gloves as well.

He then raised his two hands towards his ears and closed out his ears with fingers, letting everyone know he isn't ruffled by the outside noise and isn't allowing the word around to affect his game.

What a fine 💯 this has been by Yash Dubey in the @Paytm #RanjiTrophy #Final! 👍 👍 #MPvMUM

What a fine 💯 this has been by Yash Dubey in the @Paytm #RanjiTrophy #Final! 👍 👍 #MPvMUM

Sidelined with an injury, if KL Rahul was following the Ranji Trophy final, he would be quietly pleased with Dubey's effort and feel good that his mode of celebration is catching up.